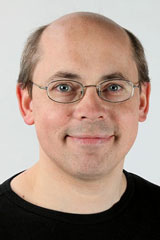 Carl Petersen is head of the Laboratory of Sensory Processing at L’ecole Polytechnique Fédérale de Lausanne (EPFL). He will deliver the European Dana Alliance for the Brain (EDAB) / Max Cowan Special Lecture at the 10th FENS Forum of Neuroscience in Copenhagen on Monday.

What are the main aims of the work going on in your lab?

When we look at the world around us, sensory information comes into the brain, but the only way we know how to make sense of it is through learning and experience. That’s how you know a chair is a chair, even though there are many types of chairs that can look very different from one another. Somehow, we know how to put that sensory information into the idea of a chair.

This tells us that perception is an active process where learned features of sensory information can generate internal representations or useful concepts. There are “feed forward” pathways, say from the eye to the brain, but there’s also what’s called “top-down control” of how sensory information is processed and distributed throughout the brain.

What kind of experiments you do?

CP: We work on the mouse whisker system, a very important sensory organ through which mice can sense the shape and texture of objects. To keep things simple, we work with one particular whisker, and trim all the others away, so our animals only have this one whisker to learn about their environment. We teach the animals to learn very simple tasks. We stimulate the whisker, and teach them to lick one particular waterspout in response, for example, so it learns to associate the stimulation with a reward, but only if it does something. This involves learning how to act upon sensory information.

We also do recordings from cells in the barrel cortex and other parts of the brain, to track where the information goes, and now we’re using optical imaging methods to monitor activity on the surface of the animals’ brains while they’re performing our learning tasks.

More recently we’re turning our attention to the learning mechanism. Presumably, reward signals are a key aspect of learning, so we’ve also been looking at a brain region called the striatum, because it receives dopamine. When there’s an unexpected reward, there’s a brief burst of dopamine in the striatum, so we’ve started looking at this in the context of whisker stimulation.

What makes the mouse whisker system so amenable to this type of experiment?

In the mouse brain there’s a large region called the “barrel cortex” which is set aside for processing sensory information from the whiskers, and what’s really nice about it is that you can actually see the representation of each whisker individually. These anatomical representations functionally link up very nicely to the whisker system. You can look at the mouse brain and literally see the whiskers represented as single units: Each is represented by a column of tissue, about 250 micrometers (billionths of a meter) in diameter, which can be recognised anatomically inside the mouse brain. The pattern of columns resembles the pattern of whiskers on the animal’s snout very closely, so we have this very precise “topographic” map—we can simply look at the brain and know exactly where we are, and we can pinpoint the small patch of tissue devoted to this one whisker.

What are some of your key findings so far?

We see early sensory responses in the barrel cortex, and then we see activity spreading to many other brain regions. Everything’s very fast in the signaling pathway, but 15 milliseconds or so after we stimulate the whisker, we see differences between naïve animals and those that have learnt the task. In the animals that learned, additional brain areas are being recruited, and we see responses all over the surface of the brain.

We know that the barrel cortex sends massive inputs to the striatum, so this is the first place where information from the whiskers meets dopamine reward signals. We think that dopamine is involved in generating synaptic plasticity during learning, perhaps by changing circuits in the striatum to determine reward. In this way, learning reward-based signals could cause plasticity at a specific set of synapses in the brain.

There are two major signals going out of the striatum—the so-called “direct” and “indirect” pathways. We’ve made recordings from both, and we find that cells in the direct pathway have a very large whisker-related sensory response that seems to be missing in the indirect pathway. This is consistent with the idea that dopamine strengthens the signals onto these direct pathway neurons, and this might encourage the animal to lick. That is, it acts as a “Go” signal that promotes certain actions.

What experiments are you planning to do in the near future?

Although there appears to be a lot of activity across many different brain structures during the learning process, some of this might not that actually be contributing to the behavior, and we need to figure out which activity patterns are critical, and which ones are just correlations. We hope within the next 5 to 10 years we’ll understand how sensory information flows through the brain for the animal to perform a task. We’ll be able to track the information and what changes need to take place inside the brain for the animal to learn to do specific things.

Do your findings have any clinical relevance?

In patients with Parkinson’s disease, dopamine depletion is thought to affect neurons in the direct pathway. That’s what affects movement—they don’t have that Go signal—and we think that’s potentially interesting. It’s likely to be far more complicated than that, but now the story’s beginning to emerge, we can probe whether or not these mechanisms actually do drive certain behaviors.

We’d also like to look at mouse models of schizophrenia. There’s a phenomenon called pre-pulse inhibition, where you give first a weak sound and then a strong sound. Most people exhibit a startle reflex in response to a loud sound, but if it’s preceded by a weaker sound, you’ve got this context dependence and you’re warned that a louder sound is coming. Healthy people will have a smaller startle reflex, but patients with schizophrenia do not. The preceding sound fails to act as a warning, because they apparently don’t have this top-down control.

It’s just a hypothesis, but I think this aspect of schizophrenia might relate to an absence of top-down control and the contextual processing of sensory information. There appear to be deficits like this in other mental illnesses too, but schizophrenia is particularly interesting, because it often involves hallucinations and other unusual percepts.