Back to Parent Page
HomeArticlesA Rose by Any Other Name: How Our Sense of Smell Influences Cognition 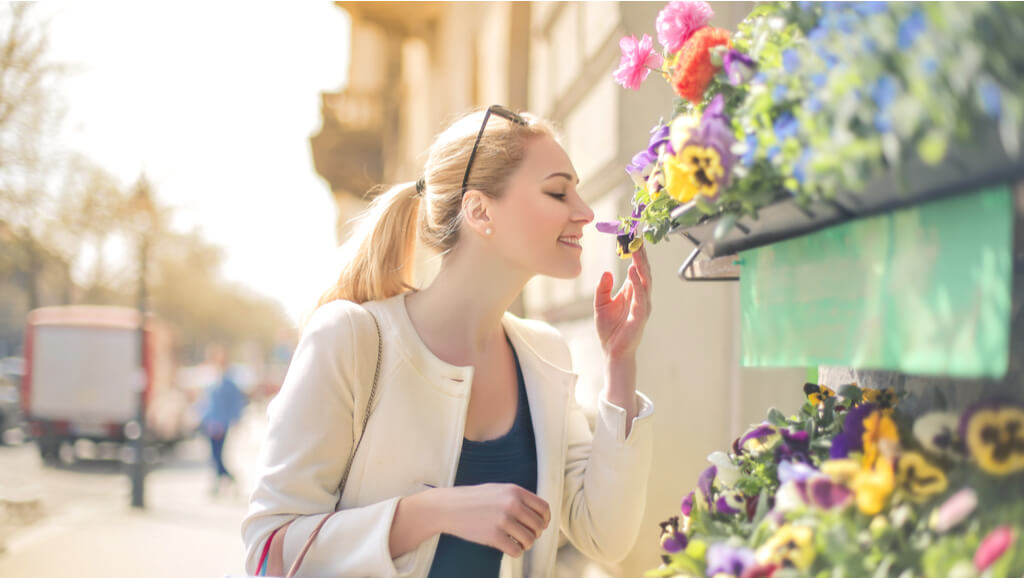 Most of us can feel the powerful link between odor and memory. Just a whiff of the right kind of vanilla can take you back to making Christmas cookies at your grandmother’s house twenty years ago. And the smell of that José Cuervo Gold?  It immediately (and, too often, viscerally) reminds you of a college party where you overindulged. But just how, where, and why the human sense of smell can trigger memories, emotions, and even direct physiological responses has been poorly understood. Now researchers from around the globe are demonstrating that one’s sense of smell may have more sway over higher order cognitive functions like perception and cognition than ever imagined. And a comprehensive body of work from scientists at Northwestern University, and others, suggest that the olfactory system is a key player in helping the brain act as a well-oiled prediction machine.

A Primitive and Bestial Sense

Since neuroscience’s very beginnings, scientists have been interested in how senses like vision and hearing worked. Until recently, smell, at least in humans, was largely ignored, says Pierre-Édouard Billot, a neuroscientist at France’s University of Franche-Comté.

“It was considered to be a primitive and bestial sense,” he says. “Philosophers thought that olfaction was unnecessary for rational reasoning—and it was also thought that smell brought people back to their most basic animal instincts.”

Alfredo Fontanini, a researcher who studies olfaction and the brain at the State University of New York at Stony Brook, says that, in the past two decades, there has been heightened interest in how the brain processes odor—and how it may influence cognition. But that initial study of vision had “set the way [neuroscientists] typically study sensory systems”—and you couldn’t approach smell the same way you did sight, as the systems are so different.

“This framework is a glorious tradition and incredibly advanced our knowledge of the brain’s sensory systems. But the framework used for visual studies is limiting when you try to apply it to olfaction,” he explains.” Early neuroscientists took a photographic perspective, that the sensory systems were some kind of camera that provided a snapshot and the picture was uploaded to “smarter” areas of the brain for processing. But we now see that perception is not just a picture or analytical description. The percept helps you interpret what you are encountering. It helps put the information around those things in the right context.”

One of the brain’s key purposes is to act as a prediction machine, says Jay Gottfried, M.D., a neurologist at Northwestern University. Smell is critical to its ability to make good predictions.

“Smell is a tremendous distance sense. Mice can detect a pheromone in the air from miles off. That information gives the animal predictive information about what it needs to do, to get closer to a mate or avoid a predator,” he says. “Humans aren’t as good as mice when it comes to olfaction, but odor can give you a lot of important information. In some ways, olfaction is the perfect predictive sense because it’s designed to bring you closer to the things you want and get you farther away from the things you’re trying to avoid.”

Gottfried’s work has demonstrated that olfaction has that kind of tremendous predictive power. In 2011, he and his colleagues used functional magnetic resonance imaging (fMRI) to show that the brain, particularly the piriform cortex, part of the brain’s unique olfactory processing system, sets up anticipatory “predictive templates” of smells. Before study participants even got a whiff of an odor, their brains were already trying to predict what smell was coming their way. The results were published in the October 6, 2011, issue of Neuron.

“We’ve seen this same predictive coding with vision. Before a sensory stimulus is presented, you see anticipatory signaling in the brain,” he says. “We saw the same thing here with odors.”

Since then, Gottfried and colleagues have determined that familiar smells can reduce fearful memories during sleep, seemingly remodeling how information is stored in memory, and that the act of rhythmically breathing in helps to modulate sensory and emotional perception through the olfactory system, quickly disseminating odor-specific information to other areas of the brain. And now, in a study published in the April 5, 2017 issue of Neuron, he and his colleagues showed, using intracranial electroencephalogram (EEG) recordings in epileptic patients, that breathing in smells results in theta oscillations, a type of brain wave that is often associated with REM sleep, exploration, and activity in the hippocampus, the brain’s memory center. Gottfried says, taken together, these findings are changing the way we think about the olfactory system and what all it may do.

“There are these respiratory oscillations that march in time with our natural breathing rate—about once every five seconds. We found that healthy participants were better at doing emotional judgment tasks on fearful faces and trying to learn a set of objects in a memory task if you encountered the stimuli during inhalation rather than exhalation. Just breathing in changes something,” he explains. “And in the epileptic patients, we saw these theta oscillations when they sniffed an odor—but not when they just sniffed controlled air. It was a very robust finding. It’s been known for decades that theta is an exploratory rhythm in rodents—and it’s also been implicated in the hippocampus—so we think that maybe there’s a more fundamental role of this particular frequency band in helping to orchestrate activity in the olfactory and limbic systems.”

Taken together, Fontanini says, all this converging evidence is showing that smell matters quite a bit to overall cognition. “This work pushes the idea that the role of the olfactory system isn’t just to detect chemicals and odors. It goes beyond that. It suggests that it also plays this really important integrative role in cognition.”

Tying It All Together

Gottfried and Fontanini are both intrigued by the idea of our natural breathing rhythm influencing other types of oscillations in the brain.

“This could be a rhythm that entrains other rhythms in the brain, far beyond the olfactory system,” says Fontanini. “And if you think about meditation, this whole idea of controlling your brain states through controlling your breathing rate, it resonates. That breathing rhythm, that respiratory oscillation, could create a window for cognitive and intentional processing.”

Gottfried says, beyond this new finding regarding breathing and theta oscillations, there is still much to learn about human olfactory processing—from the physiology of the signaling pathways to where, when, and how it changes percepts, representations, and higher-order cognitive function. That includes how olfaction may influence disease states—he does not think it is a coincidence that so many people later diagnosed with Alzheimer’s disease lose their sense of smell. He thinks the olfactory system may have much to offer our understanding of brain function, in both sickness and health.

“Odors provide a great tool to understand the fundamental properties of emotion, learning, and memory because, anatomically and physiologically, it taps right into those networks with a minimum of synapses. It gives us a really clean way of dissecting the system and understanding how it all works,” he says. “Olfaction really is the final frontier. There’s really so little known at this point. But I’m really excited to be able to explore this area and see what we can find out.”