Back to Parent Page
HomeBriefingsAlcohol and the Brain 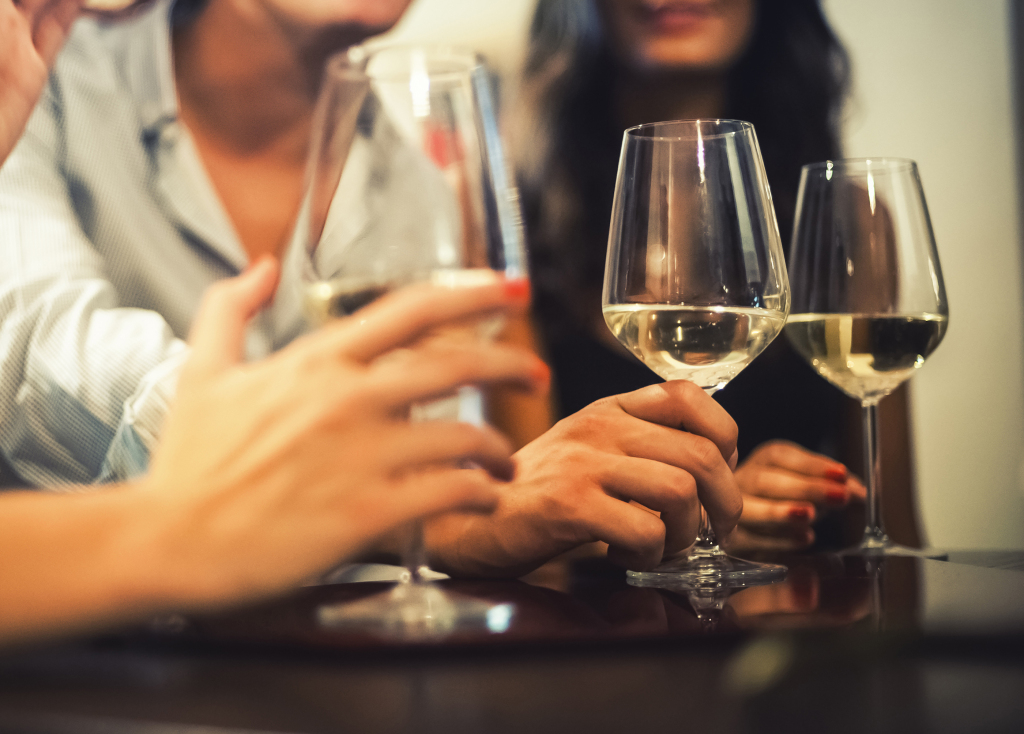 If you were to believe the headlines of recent years, you might be convinced that “moderate” drinking is good for your brain. It turns out that the real story is considerably more complicated.

Drinking to excess is well recognized to be detrimental to brain health, while drinking in moderation has long been considered a relatively harmless habit. In the past decade or so, the idea that a drink or two a day may actually have health benefits has gained momentum, fueled by studies–including many that are funded by the alcohol industry–finding a link between moderate drinking and lower risk of cardiovascular incidents and dementia. Yet evidence for neural correlates that might explain the brain benefits seen in observational studies has been lacking. Moreover, some studies have shown detrimental brain changes in moderate drinkers, leaving scientific consensus on the question elusive.

“I don’t think there’s any controversy that alcohol can damage your brain; it’s a question of what level of alcohol damages your brain,” said George Koob, Ph.D., the director of the National Institute on Alcohol Abuse and Alcoholism (NIAAA). “If you’re asking if moderate drinking of one or two drinks a day harms your brain, the answer is that it’s very, very controversial.”

A study published in the British Medical Journal in 2017–and widely reported in the lay press–was among those that threw water on the popular idea that a few drinks a week can’t hurt and might even help your brain.

The study, led by Anya Topiwala, a research psychiatrist at the University of Oxford and University College London, gained attention not only because it contradicts previous findings, but because it was rigorously designed, tracked participants’ alcohol intake and cognitive status for 30 years, and included an imaging component to examine changes in brain structure in relation to alcohol intake. Researchers looked at a subset of 550 subjects enrolled in the U.K.-based Whitehall II study, a long-term longitudinal study that has followed some 10,000 British civil servants since 1985. The research prospectively collected data on a slew of socioeconomic variables, lifestyle habits, and health status, including how much people drank on a weekly basis.

The primary finding, that moderate drinking correlated with adverse brain outcomes, made headlines worldwide, and raised questions about the risks of even light drinking to brain health throughout the lifespan. In an accompanying editorial, Killian Welch, M.D., a consultant neuropsychiatrist with the Royal Edinburgh Hospital working for the National Health Service in the United Kingdom, wrote: “With this publication, justification of moderate drinking on the grounds of brain health becomes a little harder.”

Dose-Dependent Effects on the Hippocampus

One of the most striking findings from the study was the link between alcohol use and hippocampal atrophy, a measure of how much shrinkage occurs in this deep-brain structure that is critical to memory functions. Decreased hippocampal volume, especially on the right side, has been identified as a possible preclinical marker of Alzheimer’s disease. In the Topiwala study, hippocampal shrinkage in alcohol users was dose-dependent: the more alcohol one drank, the greater the atrophy. While heavy drinkers were at the highest risk compared with abstainers, even those drinking moderately had three times the odds of right-sided hippocampal atrophy. The researchers found no protective effect of light drinking over abstinence.

Higher alcohol use was also associated with greater damage to white matter, the wiring of the brain. Changes were most pronounced in the corpus callosum, the major tract of white matter cables connecting the brain’s left and right hemispheres.

Cognitively, higher levels of drinking were tied to faster decline in lexical fluency, a measure of executive brain function assessed by how many words beginning with a specific letter subjects could generate in one minute. Conversely, no significant differences were seen on tests of semantic fluency (how many words in a specific category can be named in one minute) or word recall (how many words from a list of 20 could be recalled later). There was no evidence to support the contention that light drinkers were protected from cognitive decline compared with abstainers.

In reporting their results, the authors said that their findings support the United Kingdom’s 2016 reduction in “safe limits” for alcohol use (a change prompted by separate research showing elevated risks of certain cancers in moderate drinkers) and “call into question the current US guidelines,” because they found significant increased risk of hippocampal atrophy at levels of alcohol use below what is considered moderate use in the United States. (The US Food and Drug Administration’s Dietary Guidelines define “drinking in moderation” as up to one drink a day for women and up to two drinks a day for men. The revised UK guidelines put the limit at 14 “units” per week for men and women–equivalent to five large glasses of wine or six pints of average-strength beer.)

It’s important to note that observational research such as the Topiwala study and previous studies that have examined alcohol use can draw associations between a behavior and a health outcome, but cannot prove causation. A major question that previous studies left unanswered is the question of “reverse causality”: whether the level of alcohol use is the critical factor for the reported health benefit or if alcohol intake is merely coincidental to the real reason. Eating a Mediterranean-style diet, for example, is thought to confer health benefits, and it’s plausible that such a diet is more prevalent in light to moderate drinkers versus abstainers. In an interview, Welch said that previous studies have likely overestimated the apparent benefits of moderate drinking due to design flaws that failed to account for confounding factors like diet, education, or social interactions.

Using abstainers as a comparator group raises issues as well, he said. “One of the findings that has been repeated in these kinds of observational studies is that people who drink moderately have better health outcomes than people who are abstinent,” Welch said. “That’s been interpreted to imply that alcohol is having some sort of health benefit. While that is one possible explanation, an alternative explanation is that teetotalers [non-drinkers] do worse than moderate drinkers because of other aspects that are likely to affect health outcomes.”

An obvious one, he said, is that abstainers may not drink because they have a history of alcohol dependence, or because they have health conditions or take medications that make them less likely to drink. Any of these could skew results in favor of moderate drinking. Cross-sectional studies that don’t probe life-long drinking habits are going to miss any history of heavy drinking.

“It isn’t impossible that modest levels of alcohol may indeed have some particular cognitive benefits, particularly in terms of cardiovascular-driven dementia, but it is striking that the strength of the association between moderate alcohol consumption and reduced risk of dementia seems to get progressively weaker as the design of these observational studies improves,” Welch said.

In the Topiwala study, data on alcohol use were collected prospectively over 30 years. The researchers also went to great lengths to take into account a wide range of potentially confounding factors. “It was a very well-conducted study,” Welch said. “The researchers were pretty exhaustive in the variables they controlled for, to a degree that you don’t often see in these kinds of studies.”

While the jury is still out on the cognitive impact of drinking in moderation, Koob, the NIAAA director, said the current US guidelines “are probably okay.” He said the data for a moderate-drinking benefit are compelling for heart disease, stroke, and diabetes. “At low to moderate levels–roughly, below seven drinks a week to be on the safe side–there may actually be benefits, particularly for individuals over 50 years old.” He believes the idea that there are brain benefits from moderate drinking is “a reasonable hypothesis that needs to be tested.”

The NIAAA was instrumental in funding a large randomized, controlled clinical trial to do just that, but the study was abruptly shut down by NIH Director Francis Collins, M.D., Ph.D., a few months into recruitment. The unprecedented move came after an internal NIH investigation found evidence of serious problems with both the trial design–which they said was skewed to maximize benefits and minimize negative effects of alcohol–and inappropriate coordination with alcohol industry funders. Five alcohol companies had contributed about two-thirds of the $100 million cost of the international trial through the Foundation for the NIH. The trial’s Principal Investigator, Kenneth J. Mukamal, M.D., of Harvard-affiliated Beth Israel Deaconess Hospital and senior staff at the NIAAA have come under criticism after emails uncovered during the investigation revealed the extent of collaboration with alcoholic-beverage industry officials. The ethics breaches were enough to convince Collins to take the extraordinary step of halting the trial, even after some $15 million had been spent.

No Debate on Brain Effects of Excessive Drinking

While the debate over the health benefits and risks of moderate drinking continues, it’s very clear, experts say, that excessive alcohol is a dangerous tonic for the brain.

“It’s been recognized for more than 100 years that people who consume alcohol at high levels are at risk of developing severe cognitive impairment,” said Welch. “It’s directly related to high alcohol consumption and the malnutrition associated with it.”

Alcohol use disorders often go hand in hand with nutritional deficiencies, in part because heavy drinkers tend to have poor diets and because alcohol interferes with the body’s ability to metabolize certain nutrients. Korsakoff’s syndrome, a condition marked by severe thiamine deficiency linked to alcoholism, is devastating to the brain, destroying the ability to lay down new memories. Even in the absence of obvious dietary nutritional deficiencies, heavy drinkers are at greater risk of developing alcohol-related brain disease, a syndrome characterized by deficits in high-level brain functions such as problem-solving and impulse inhibition.

These so-called executive functions are linked to the frontal cortex, an area of the brain at particular risk from excessive drinking. Imaging studies on long-term heavy drinkers show significant damage in the frontal cortex, and persistent recovery from alcoholism is less likely when frontal areas are damaged.

One possible explanation for the brain damage associated with alcoholism is its effect on glutamate, a major excitatory neurotransmitter in the brain. When expressed at high levels, glutamate is toxic to neurons. Experimentally, alcohol acutely suppresses glutamate transmission, but when the effect of alcohol wears off, glutamate returns in higher levels, creating a “rebound hyperexcitability” in the brain. Even low doses of alcohol can suppress the glutamate system, Koob said, and create a rebound effect as the alcohol wears off.

The “glutamate rebound” is one hypothesis as to why alcohol exposure can have neurotoxic effects at high doses. Many other neurotransmitters are also activated during withdrawal from alcohol and may contribute to neurotoxicity.