This is the third in a series of Brain Awareness Week partner interviews, in which partners share their BAW experiences and tips for planning successful events. Norberto Garcia-Cairasco, Ph.D. is the director of Neurophysiology and Experimental Neuroethology Laboratory (LNNE) at Ribeirão Preto School of Medicine at the University of São Paulo, Brazil. 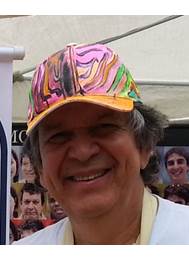 Dana Foundation: How did you become involved in Brain Awareness Week?

Norberto Garcia-Cairasco: Since 2010, the Society for Neuroscience Rio Chapter has organized events for Brain Awareness Week in Brazil. In 2011, the LNNE joined the effort and developed a significant number of activities in the city of Ribeirão Preto. Then in 2012, the Brazilian Society for Neuroscience and Behavior (SBNeC) invited me and other colleagues to create a National Coordinator Committee for the first National Brain Awareness Week (I Semana Nacional do Cérebro (I SNC)). There was an increase in activities in Brazil as a result of the network strategy, and we were quite happy that the LNNE played an important role in this improvement. Using this experience, in 2013, we increased our country’s activities to nearly 130 events from around 50 the previous year. Brazil’s national program represented more than 13 percent of all reported 2013 BAW events worldwide—a very significant jump. Records of these activities can be found in our BAW partner reports, on the SBNeC site/blog and other Brazilian blogs/sites, and on Facebook and YouTube.

DF: Last year, the Neurophysiology and Experimental Neuroethology Laboratory (LNNE) at the University of São Paulo organized a public event in Ribeirão Preto, “SOS: The Brain in the Park,” which tied art and other interactive lessons to the brain. What kind of activities did you offer and why did you choose a public park as your venue?

NG-C: I’ve always believed that curiosity is the main driver of discovery, and that investment in knowledge-building can produce positive changes in society. At the LNNE, we decided it was not enough to stay at the frontier of knowledge, closed in our university walls, and wanted to find novel ways to share not only our research findings, but also our questions and doubts.

For previous BAW events, we presented in workshops and round tables at universities, high schools, and primary schools. We thought it would be fun to set up in the biggest downtown park (Praça XV de Novembro) in the historical heart of Ribeirão Preto. To make this a reality, we at the LNNE invited professors, post-docs, and graduate and undergraduate students from our medical school to suggest activities, keeping in mind they needed to be held over a period of four to five hours in a downtown park, and they needed to appeal to an audience ranging from children to elders. Our goal was to create activities that could engage people from various backgrounds and with different levels of education, and to interest them in the discovery of what neurobiologist Semir Zeki calls “the mysteries and miseries” of the brain. Some of the themes were associated with the creative process of neuroscience and art, others were associated with neurological or neuropsychiatric illnesses.

Some of the activities from that wonderful Saturday morning in the park were: “Brainfitti: Brain Grafittis” with street artists painting brain images; spontaneous conversations with people in the park/on the street about myths about the brain; an exhibit of pathological and normal brain specimens, with medical students explaining functional and dysfunctional brains; and several art workshops for kids, including making wearable brain hats and painting “brains” on pasta shells.

DF: How did you publicize your event? Were you happy with the turnout?

NG-C: This event, as well as others associated with the I SNC, was publicized on the SBNeC website and blog, Facebook, and local and university sites and blogs. The number of people who visited the different booths was great, but being in a public place, we hoped that it would be a bigger turnout. Obviously on a Saturday morning in downtown Ribeirão Preto we were competing with a wide variety of other activities, sellers of merchandise, and nearby restaurants. Considering the competition, the number of people who visited our “SOS: The Brain in the Park” was quite significant.

DF: The University of São Paulo (USP) organizes many events during BAW each year. Do you collaborate with other departments or laboratories within the university and have you attended any other events that have inspired your planning efforts?

NG-C: Our LNNE is in the Physiology Department, but I am also the Adviser of Graduate Students at the Neuroscience and Behavioral Science Department. There we have excellent labs that participate in the SNC and in BAW activities. The Epilepsy Laboratory and the House of Science (Casa da Ciência) at the University Hospital, offer the relevant “Adopt a Scientist” program, in which high school students “adopt” graduate students, who then teach classes for several weeks. At the end of the session, the high school students act as journalists, interviewing one researcher whose investigations were studied.

The outlook is even better for future interactions, because our USP Campus at Ribeirão Preto is the most important one out of the Capital São Paulo. It is particularly well-known because of the prestige of its scientific community and formation of Ph.D.’s and masters, not only in the medical school, but in other areas such as medical physics, biomedical informatics, psychobiology, nursery school, physical therapy and rehabilitation, among others.

NG-C: We are very enthusiastic this year to repeat the success of “SOS: The Brain in the Park.” We already recruited more professors and students than in 2013, and we plan to increase the diversity of activities offered. We are organizing the round table “Philosophy and the Making of Science” and “Scientific Talk and Round Table on Neuropsychiatry at BAW” at the university; activities in high schools and other universities; and neuroscience-art exhibits such as “Making Art with Neuroscience Journal Covers.”

Finally, one stand-alone activity that I proposed be held nationwide will be “Brazil Neuroscience Connected by a Single BAW Slide.” The idea is to present one slide announcing BAW-III SNC in every neuroscience-themed class. In this slide we will include the III SNC, SBNeC, and BAW logos, as well as website links. Teachers have been asked to announce BAW and promote our activities during the first five minutes of class. The idea is to get the greatest number of slide presentations over the whole map of Brazil during BAW—another example of the power of networks.