Back to Parent Page
HomeArticlesMatthieu Ricard and‎ Wolf Singer’s Beyond the Self: Conversations between Buddhism and Neuroscience 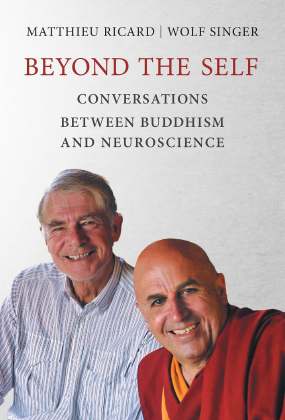 Impulsively, I rubbed Matthieu Ricard’s head on the beach in Rio De Janeiro.

This is not as weird as it sounds. He is incredibly joyful, perhaps equally as much as his teacher Tenzin Gyatso, the 14th Dalai Lama. We were at TED Global and because I knew of Ricard’s work, I had been trying to meet him, but he was constantly mobbed. When I spotted him walking alone, I said, “Matthieu, I have been looking for you!” He replied, “Paul, I have been looking for you.” We hugged and talked science, and then the speaker concierge from TED tried to pull him away to do his “hair and makeup” preparation before his talk. Rubbing his bald head, I refused to let him get away from me that fast.

Having met Ricard and knowing Wolf Singer’s research, I was delighted to learn of their book three years later. Ricard earned a Ph.D. in molecular biology and is a Buddhist monk who lives in a monastery in Nepal. He has participated in, and co-authored, neuroscientific studies of meditation, and Beyond the Self reflects his scientific training while drawing on his extensive study of Buddhist traditions. Singer is a physician and neurophysiologist who, until his recent retirement, led the Max Planck Institute for Brain Research in Frankfurt, Germany. Singer’s research has focused on the neural basis for awareness and cognition.

Their book is an edited set of conversations Ricard and Singer had over the course of eight years at meetings around the world. This format offers an insight into how these two scholars have, with humor and skepticism, sought to find common ground between the third-person attempt of Western science to understand mental processes objectively , and the first-person introspective approach used over the last two millennia by Tibetan Buddhists. The reader is allowed to eavesdrop as the authors discuss fundamental issues in neuroscience—the nature of consciousness, how emotions are processed in the brain, and how practice changes mental processes—in an engaging and free-flowing way.

Ricard offers the effects of meditation on mental processes as a window into how the brain works, while Singer states the scientific consensus on the neural mechanisms producing these effects. Careful readers will gain much from their back-and-forth. Yet, because Singer is speaking to Ricard as one trained scientist to another, the most instructive points are at times glossed over and the authors use scientific jargon a more traditional book would expansively explain. Counterbalancing this is some repetition in explicating the neuroscience as the conversations start, stop, and start again; the redux aids comprehension as different aspects of key points come into the discussion. At its best, this format allows the reader to acquire knowledge about how the brain works in a natural way, without the dreariness of a textbook.

Of the two dialogists, Ricard is more fun, irreverent even, weaving captivating narratives that illustrate his 35 years of Buddhist practice. One particularly beautiful reflection that captures Buddhist tradition is, “We may also use attention to cultivate compassion. If the mind is constantly distracted even though it looks as if one is meditating, then the mind is powerlessly carried away all over the world like a balloon in the wind.” This illustrates the yin and yang of the book: The scientist in me wanted the authors to identify the mechanism through which distraction inhibits compassion, but as an appreciative reader I simply reveled in the poetry of abstraction and metaphor.

Ricard understands the scientific studies of meditation and discusses them in detail, but ultimately he is more interested in its practice. The tension between understanding what meditation does in the brain and actually meditating is woven through the book and keeps the conversation lively. It also leaves the reader, and indeed, Singer, at a bit of a loss because he, and we, have presumably not meditated for thousands of hours and must take Ricard’s account of his experience as genuine and generalizable.

While the book is focused on meditation, there is a significant amount of foundational neuroscience in it. For example, when the authors describe an experiment showing that experienced meditators can inhibit the startle reflex, they note that this reflex is generated in the brainstem and conventionally thought to be “autonomic” or outside of conscious control. The authors also discuss a study showing that experienced meditators can perform cognitively difficult tasks with less neural effort and for longer periods of time than can the untrained. This provides an insight into the extraordinary plasticity of the brain.

Both authors are humble in their dialog, consistent with the enthusiastic embrace of science by Buddhists and the centrality of compassion in their religion. Singer is the surrogate for the reader, probing Ricard with questions both personal and scientific. While he pushes Ricard on some topics, ultimately the third-person scientific approach cannot challenge Ricard’s first-person experience as a monk because science is ultimately mechanistic while one’s own experience is wholistic. Even though Ricard discusses scientific studies in answer ing Singer’s queries, he ultimately relies on his deep knowledge of Buddhist teachings to prevail in most of their conversations. The book is a bit unbalanced in this respect, coming off as a pro-meditation (though non-religious) treatise.

The ride through Beyond the Self is rapid and enjoyable. Those who practice or are interested in meditation will gain much from reading it, as will those with a passing or professional interest in neuroscience. The dialog style can be discursive, but it also requires that the brain attend to multiple aspects of meditative neuroscience in a way traditionally structured books do not. By example, Beyond the Self persuasively suggests that multiple narrative and evidentiary streams are a way to develop contextualized wisdom. That may be a good enough reason to read this fascinating book.