Back to Parent Page
HomeCerebrumBuild a Better Brain Model 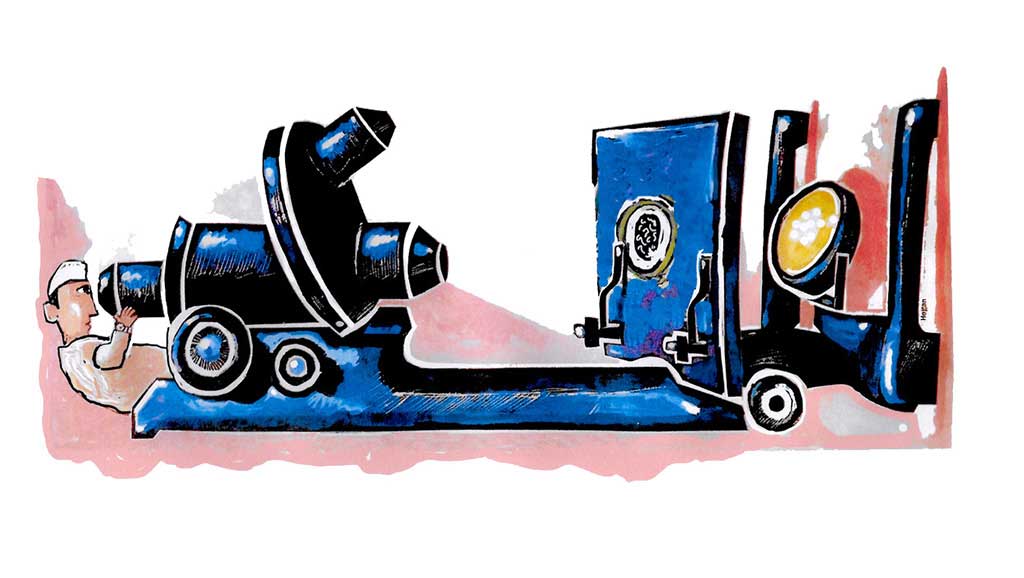 Since its inception, the field of neuroscience has relied on animal models, from fruit flies to macaque monkeys, to better understand the behavior and inner workings of neurons. But while these models have led to remarkable insights about the brain in both health and in disease, they do have limitations. The very genetic differences that place us in different species also make the translation of neurobiological findings in animals to humans challenging—if not outright impossible.

“We’ve now cured Alzheimer’s disease a dozen times over in mice, but we haven’t cured it in human patients,” said Matthew Blurton-James, Ph.D., a neurobiologist at the University of California, Irvine. “There’s clearly a big species difference in how this disease develops, which means our current animal models can’t get us the answers we’re searching for.”

In the past few years, however, advances in technology have led to the development of innovative models to study the activity of human neurons—and how they communicate with one another. Such models, which include ex vivo tissue harvested from living human donors, organoids, and chimeric models (animal tissue modified with human genes or cells), are enabling scientists to investigate processes in ways that were previously unthinkable.

“These new technologies, including those that use induced pluripotent stem cells (iPSCs), are really quite striking,” said Walter Koroshetz, M.D., director of the National Institute of Neurological Disorders and Stroke. “And the real advantage of these is that they offer us a new way to study human brain cells, particularly when it comes to developmental processes, that is incredibly valuable.”

Despite that value, there are numerous concerns, both practical and ethical, surrounding the use of such models—concerns that experts say should be addressed now before the technologies that support the development of models dramatically outpace scientific policy and oversight regarding their use.

What do you imagine when you hear the term, “brain in a dish?” Or “human brain experimental model”? It may conjure an image straight out of a science fiction movie—a full-size, pulsating brain in a jar of fluid that can think and feel, even without a body. At first glance, said Jonathan Ting, Ph.D., a researcher at the Allen Institute, most people wouldn’t even realize that most of these new experimental models are made of human brain tissue. His own laboratory is using sugar cube-sized samples of ex vivo tissue—actual brain tissue harvested from consenting patients undergoing brain surgery—to better catalogue the variety of cell types found in the human cortex. “We now have the ability to collect tissue from the operating room and then transport it to our lab by ambulance and keep it alive with oxygen for a few days,” he explained. “That allows us to gain a deep understanding of the composition of the brain in different regions, including how many different cell types reside there, and what their defining molecular, morphological, and anatomical properties are. It gives us a strong foundation to understand the component parts of the brain – and use that as a jumping off point to understand what may go wrong in disease.”

Yet Ting’s tissue models, taken from adults, can tell us little about the developing brain. Hence researchers like Paola Arlotta, Ph.D., chair of the Department of Stem Cell and Regenerative Biology at Harvard University, are using organoids, or so-called “mini-brains,” three-dimensional, self-organizing tissue cultures derived from human iPSCs, to study how brain cells come together as the brain grows. Arlotta said most people have no idea what organoids look like—instead of life-sized, fully functioning brains, they are actually 4-to-5-millimeter pieces of tissue that resemble potato gnocchi rather than any bodily organ.

But despite their small stature, Arlotta said, these assemblages of cells allow scientists like her to investigate both brain development and the genetic aspects of disease in a very precise manner.

“You don’t have to be a neuroscientist to know that an animal model is different than a human,” she said. “While animal models have been essential, there’s only so much we can learn. And as we have no access to actual human brain development and how different genes contribute to that, since so much occurs in utero, we have not been able to experimentally study it. Organoids, as primitive as they are, offer us the opportunity to ask new questions and do some of those experiments.”

Finally, researchers like Blurton-James are utilizing chimeric models of the brain, or experimental models where an animal’s brain has been “humanized” with the addition of human genes or cell types. His own work is looking at how microglia, a special type of neural support cell, are affected in Alzheimer’s disease.

“We study microglia and how they contribute to different brain disorders,” Blurton-James explained. “Before, we would isolate microglia in a dish and study them. Yet, when we cultured these cells, we saw that their gene expression changes. In fact, the longer they culture, the [greater the change]. So we put two and two together and realized that we needed to put these stem cells in a brain—in our case, a mouse brain—and what we found is gene expression very similar to what we see in cells we’ve just taken out of the human brain. By using this type of model, we’ve dramatically reduced the differences we saw in microglia in a dish.”

The Scientific Limitations – and Ethical Concerns

Over the last few years, scientists have used these different models to make discoveries about how different genes contribute to both brain development and disease—discoveries they would have been unable to make without them. Researchers working with these approaches said they are not meant to replace animal models in full, but rather to offer new insights they would be unable to investigate otherwise. As organoid models appear to mimic the rich diversity of cell types found in the human cortex, Arlotta said, it gives scientists a rare opportunity to access some aspects of human development.

“It’s exciting, even as primitive and reductionist as these models are, to look at what is happening in the brain during this time,” she said. “We can answer questions about how different genes are affecting brain development – and with that, we have hope that we can one day understand what may start different brain disorders.”

Yet these models do have their limitations. First and foremost, they are limited by size and development. Organoids, to date, max out at the 4-5-millimeter size, even after months of development. And without vital vasculature and other bodily support, the brain cells contained within those models cannot reproduce normal developmental patterns of cell organization and architecture. Arnold Kriegstein, M.D., Ph.D., a researcher at the University of California, San Francisco, agreed with Arlotta that organoids can produce a variety of different cell types, but single cell RNA-sequencing comparisons of organoid cells show that they lack the “cellular and structural complexity” of cells found in a normally developing brain.

“Our genetic analysis is showing that the organoid cells lack specificity. It’s almost as if their identity is a bit confused,” said Kriegstein. “Compared to normally developing cells, the organoids are relatively impoverished in terms of diversity…and they don’t mature according to the development programs that you see in normally developing brain tissue. Both cell identity and maturation are important in the study of human disease and these are not faithfully reproduced in current organoid models.”

Several laboratories are hard at work to create new paradigms to improve each of these models—techniques that can extend the amount of time ex vivo tissue donations can survive outside the body as well as technologies to improve the ability of organoid and chimeric models to better mimic normal development. As they do, neuroethicists say it is vital that scientists discuss the potential consequences of such advances. Could scientists inadvertently create a super-mouse, à la The Secrets of NIMH? Could more sophisticated organoids start to learn or perhaps feel pain? While Joshua Gordon, M.D., Ph.D., director of the National Institute of Mental Health, stated that these models remain quite basic today, he agrees that scientists, scientific agencies, policy makers, and other science stakeholders should be talking about the future now.

“We don’t take for granted that these models will stay this simple,” he said. “That’s why we’ve had several workshops specifically looking at the question of what we need to think about as organoid preparations and other models get more complex.”

He said a few themes have emerged from those discussions, including the need for scientists to appropriately educate and patients who donate tissue and gain their consent about how that tissue will be used, as well as the need to monitor these models to check for more advanced brain activity. Arlotta agreed—but cautioned that it’s important to make sure these discussions are grounded in facts.

“We have to constantly consider these issues within the context of the science,” she said. “It doesn’t do us much good to discuss things without relating them to the actual biology of the systems we’re studying. These models offer us a way to study things we have never had access to before. Today, they are so reductionist that I think there is little ethical concern. But as we make advances, it is absolutely necessary that every conversation is strongly rooted in the science or it does us little good in the end.”