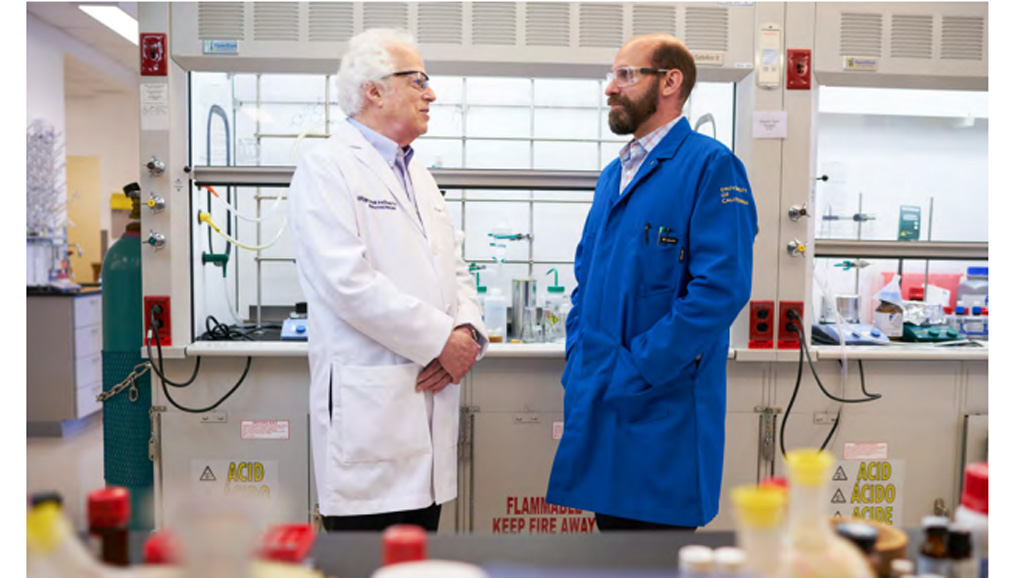 Stanley Prusiner in his lab, with fellow researcher Nick Paras

In summer 2017, a team of Boston University researchers made headlines when their JAMA study noted that the donated brains of 110 out of 111 former National Football League players showed signs of chronic traumatic encephalopathy (CTE) during post-mortem analysis. CTE, a progressive neurodegenerative disorder triggered by repeated trauma to the head, is caused by the accumulation of tau prions, misfolded proteins that aggregate and propagate, leading to cell death. To date, as with other neurodegenerative disorders, there is no treatment for CTE. Stanley Prusiner, M.D., a neurologist at the University of California San Francisco (UCSF) School of Medicine, won the Nobel Prize in 1997 for identifying prions as the infectious agent responsible for mad cow and Creutzfeldt-Jakob diseases. He is now working on developing animal models to better evaluate drugs directed at eliminating tau prions. 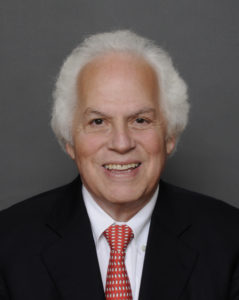 I have been interested in prions and their role in neurodegenerative disease for some time. We see tau problems in Alzheimer’s disease, Pick’s disease, progressive supranuclear palsy, and corticobasal degeneration—the list goes on.

Tau is a very interesting protein because there are a variety of insults to the brain that cause tau to become pathogenic and form tangles filled with tau prions resulting in brain dysfunction.

Studies show that CTE is caused by the tau protein. In November 2016, we took samples of brains from people who had been diagnosed with CTE. We were able to transmit the disease into new cells, which showed us that the tau proteins in these patients had become prions. This offers us a new way to think about potential treatments.

Tell me more about prions.

Prions might be called an oddity in medicine. Beginning in the mid-1940s with the discovery of DNA as the genetic material of life, scientists focused on showing that the instructions for progeny cells to multiply are carried within the genetic code. This code is universal, from viruses to bacteria to mammals. In fact, there is a wonderful saying: “What’s true for bacteria is true for an elephant.” In the late 1970s, when scientists began to take seriously the idea that the pathologic agents causing brain degeneration in sheep, in a disease called scrapie, could be caused by something other than a DNA-containing pathogen, there was great disbelief.

When I entered the field in 1974, there was the feeling that the possibility of some other causative agent was remote, if not, impossible. To make sense of all of the impossibilities, people began to use the phrase “unconventional virus.” But no one knew what an unconventional virus was. In fact, scrapie researcher, I.H. Pattison, commented, “To explain findings that did not fit with a virus hypothesis, [virologists] had rechristened the causal agent an ‘unconventional virus’. Use of this ingenious cover-up for uncertainty made ‘virus’ meaningless—for is not a cottage an unconventional castle?”

Following exhaustive studies, we were unable to find in prions any DNA or the cousin of DNA called RNA; therefore, we were dealing with a pathogen that replicated in the absence of a gene. This was considered heresy. From there, we isolated the protein, which we called PrP, and found that it could undergo self-propagation in terms of converting a normal form of the protein to the prion form.

As the work on scrapie prions progressed, people began to investigate the possibility of other neurodegenerative diseases being caused by prions. At first, there was a large resistance to this idea, but with time more people began to think about this as a possibility.

Over the past dozen years, there has been an increasing amount of evidence arguing for this view and more and more data supporting the proposition that many different neurodegenerative diseases are caused by prions. Some of these diseases are caused by Ab and tau prions (Alzheimer’s), others by tau prions alone (CTE and progressive supranuclear palsy) and still others by a-synuclein prions (Parkinson’s and multiple system atrophy). These findings have been game-changing in the effort to find effective therapeutics to treat these disorders.

What are the challenges involved with finding a treatment for CTE?

To say that developing a treatment for CTE and other tauopathies has been challenging is a gross understatement. First of all, we don’t have an in-depth understanding of the process by which head trauma produces tau prions. With that said, we have been unable to develop animal models that begin with trauma and eventually lead to CTE in the brain. Nevertheless, advances in the study of tauopathies have made it reasonable to begin thinking about how to discover effective drugs

Our approach has been to genetically engineer mice—and we’ve gone through numerous iterations—to create a substantially improved model. The work has been unbelievably laborious. We started with an animal model called PS-19. But some animals would look great and others would have brains that were falling apart; there was too much variability. So we moved to a different mouse model, one that we call 2541. There, we can see more synchrony. All these animals die around 200 days of age, which is an immense improvement.

Your work has uncovered a potential therapeutic protein for CTE called sortilin. Tell me more.

It was a surprise—no one thought sortilin was related to prion biology. While there was an increasing interest in sortilin with respect to Ab pathology, I was unaware of this relationship. However, when we looked at the 2541 mouse, we found that when we cut the brains of these animals sagittally, right down the midline, there are very few tau prions in the forebrain but many in the hindbrain. We didn’t understand why, but obviously something was going on. Something was permissive in the hindbrain or something was suppressing in the forebrain.

I worked on this with my colleague, Noah Johnson. We started by asking, “What is the difference between the forebrain and the hindbrain?” We looked to the literature and saw that 15 years ago, there were various tau transgenic mice that showed the same differences in the forebrain and hindbrain, but people didn’t think too much of it. I thought there had to be an explanation.

Then I happened to be looking at a recent paper on PrP scrapie prions and saw that sortilin prolonged the lives of mice injected with scrapie prions. It was like a lightbulb went off. So we got some antibodies to sortilin, did the experiments, and found that sortilin was also a potent regulator of tau prion levels in the brain. It was quite unexpected.

Currently, we are studying what sortilin does and examining the possibility that a small molecule might activate sortilin and make it more potent. Such a small chemical or drug might be a terrific inhibitor of prion formation—an entirely new approach for a neurodegenerative therapy that we never dreamed possible.

What do you hope this line of research will lead to?

New drugs! It’s really all about treatments. That’s the only thing that matters now. Scientists have uncovered all this information about the process of neurodegeneration, spent hundreds of millions, if not billions, of dollars on all that work, but still don’t have a single drug that slows or stops neurodegeneration. When we find one that actually works, the whole field will explode.

You’ve had the kind of prolific career that young investigators dream of having. What advice would you give the newest generation of researchers?

We have a large number of young investigators all over the world, but we don’t have enough money to fund all the people at the level that we should. It’s not easy to sell a career in science to young people—particularly basic science and basic translational medicine—because they don’t have the financial support that they need to be successful. I worry that we’re starting to kill off future generations of scientists. And there are still so many diseases out there to study. We need to create medicines to treat all those diseases—and it’s far cheaper to do science than it is to pay for all the medical bills for an increasing number of patients.

With that said, science is a gigantic privilege. People who can have a career in science are extremely lucky. And if they get really lucky, like me, and fall into something that turns out to be incredibly different than anyone ever expected, nothing could better. What has happened to me over the years has been wonderful. When you have the opportunity to truly discover something unique, something that people didn’t even suspect existed, it’s a phenomenal experience. I hope that today’s investigators, despite the challenges in science, see that potential.

A novel vector for transgenesis in the rat CNS

β-Amyloid prions and the pathobiology of Alzheimer’s disease

Mouse models for studying the formation and propagation of prions