Back to Parent Page
HomeArticlesCould the Cerebellum Help Drive Creativity? 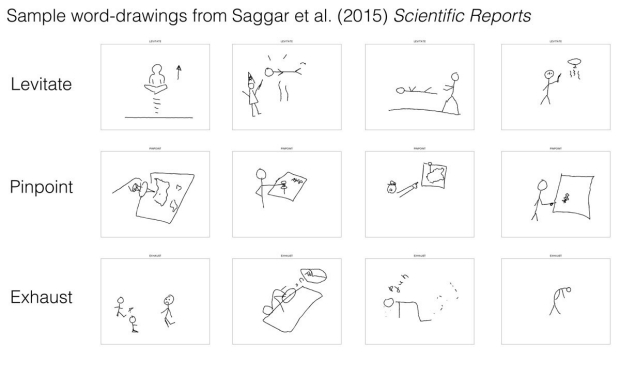 Participants in a study of creativity had their brain activity recorded while drawing words, examples of which can be seen above, or a zigzag line. [Courtesy of the Reiss lab]

Translated from the Latin, the word cerebellum means “little brain.”  And as you observe this particular brain region’s singular structure, with its finely-spaced, accordion-like grooves, you can see why early anatomists might have considered it to be completely separate from the cerebral cortex. But, the cerebellum, nestled under the cerebral hemispheres, boasts strong reciprocal connections across the rest of the brain. Scientists are learning that it acts as a coordinator, helping to facilitate balance, motor control, and directed movement. And now, a new study from Stanford University suggests that the cerebellum may also help direct creative processing.

People with cerebellar damage often have obvious trouble with the timing or coordination of their movements, but over the past twenty years, neuroimaging work has also suggested that the cerebellum’s contribution may extend far beyond movement. This brain region is active during cognitive tasks that involve mental imagery, attention, and language. The cerebellum is tightly interconnected with the brain’s prefrontal association areas, regions of the brain responsible for abstract thinking, planning, and constructing meaningful perceptual experiences. Allan Reiss, director of the Center for Interdisciplinary Brain Sciences Research at the Stanford University School of Medicine, says that if the cerebellum were only involved in movement, it would be a waste of valuable brain real estate.

“The reason that the cerebellum is so good at helping us learn and coordinate motor movement is because it has these amazing connections with the rest of the brain. Those connections allow it to emulate motor action, unconsciously most times, and that then helps us learn and practice movements,” says Reiss, also a member of the Dana Alliance for Brain Initiatives. “So we started to think, since the cerebellum helps synthesize these movements, it might be involved with similar types of coordinated harmonious activity. So maybe this amazing synergistic processor is doing something similar with ideas and creativity.”

To test the idea, Reiss and colleague Manish Saggar took a page from the popular game Pictionary. In the game, players have to represent a word by drawing a simple illustration, and teammates need to guess the word by that drawing alone.

“We wanted a task where we weren’t explicitly instructing participants to be creative, because there can be a lot of anxiety in that which can actually get in the way of creative production,” says Saggar. “We wanted a task that could be fun and expressive. And we kept searching for a task and coming up short. Then, one night, I was playing Pictionary with my friends and I had an ‘a-ha’ moment. It’s exactly what we needed.”

Reiss and Saggar recruited 30 people to lie in a functional magnetic resonance imaging (fMRI) scanner and draw pictures to represent words like vote, cry, and salute. There were no explicit instructions to be creative, just to represent the word to the best of their ability in 30 seconds. There was also a control condition where participants drew a zigzag line for the 30 seconds instead.

The word drawings, captured on a special tablet, were then independently rated for creativity by two professors at Stanford’s illustrious Institute of Design; two individuals, as Reiss put it, who have jobs that are “centered around the construct of creativity.”

“Each drawing was evaluated on different dimensions, like how well it depicted the word, how original it was, and how elaborate it was,” says Saggar. “And we combined those scores together to create one creativity score.”

Reiss, Saggar, and colleagues found that drawings with high creativity scores were significantly associated with higher cerebellar activation and lower pre-frontal cortex activation. Lower creativity, on the other hand, was associated with the opposite activation trends. The study was published last month in Scientific Reports.

Reiss says that these findings fit nicely with other studies that show reduced pre-frontal activation during musical improvisation. Charles Limb, the otolaryngologist and brain researcher who spearheaded that work, says Reiss’ findings are interesting, but it may hard to pinpoint the exact contribution of the cerebellum to the creative process because of the control task used.

“The zig zag line condition was important but there should also be a higher level motoric control condition—one that adequately reflects the motoric requirements of drawing a complex picture,” he says. “Some of the findings may be directly attributable to the lack of this kind of control. But no single study is perfect—and, in the aggregate, we are starting the understand more about the complex nature of how creativity is implemented in the brain.”

While Reiss agrees that another control task may have been warranted, he says that this study does provide strong evidence that cerebellum is involved when we are processing ideas—that is, “stringing them together, matching them up, and creating new correlations.”  He and Saggar hope to do more studies in this vein to better understand the cerebellum’s role in a variety of creative tasks.

“We can now do more studies, across different areas of creativity, and look at what the cerebellum might be doing in each,” he says. “If it is indeed the case that the cerebellum is the coordination engine that can facilitate all these amazing ideas, it’s possible that it’s a common denominator in the human creative process. And if that’s the case, we might be able to train people to utilize those circuits more efficiently with real-time feedback.”

But, in the meantime, Saggar says there is one piece of advice that he is already taking away from this study. “If you want to come up with something creative, it’s better not to overthink it,” he says. “Because if you are trying too hard to be creative, trying too hard to evaluate as you go, you may actually get in the way of what you’re trying to accomplish.”