Back to Parent Page
HomeBriefingsCRISPR and the Brain 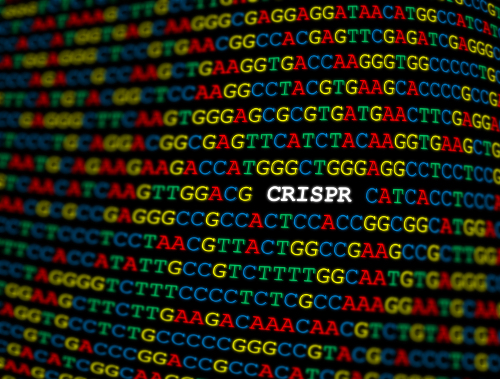 With recent headlines including, “Restoring the extinct woolly mammoth to life ;” “Genetically engineered ‘super’ dogs with increased muscle volume;” “Malaria-resistant mosquitoes ;” and “Crops re-tooled to naturally repel pests and insects ;” it’s likely you have but just aren’t aware of it.

While these news titles may sound like science fiction stories come to life, they highlight real scientific studies that are utilizing a pioneering gene editing technique known as CRISPR Cas-9. But this new method isn’t all about de-extinction or naturally occurring insect repellents, it also offers great promise to the field of neuroscience—both as a research tool and, potentially, a treatment for brain-related disorders.

“This is an incredibly powerful technique that allows geneticists to do what nature has done—to introduce variation into the DNA, whether it’s inactivating a particular gene or simply changing the genetic sequence,” says James Gusella, Ph.D., former director of the Center for Human Genetic Research at Massachusetts General Hospital and a member of the Dana Alliance for Brain Initiatives. “This type of gene editing offers tremendous opportunities for research, but also, ultimately, for therapeutics. It really has a remarkable number of applications.”

Researchers in the fields of neuroscience and neurobiology also hope CRISPR can further our understanding of the brain and its role in disease and behavior, and one day offer treatments for a range of neurodevelopmental and neuropsychiatric disorders.

How Does CRISPR Work?

Jennifer Doudna, Ph.D., a biochemist at the University of California, Berkeley, was one of the creators of the CRISPR gene editing technique. At the 2017 Aspen Ideas Festival , she described the method in this way:

“I like to use the analogy of word processing because [CRISPR] is very analogous to that. Think of the DNA code like the text of a document. CRISPR is like the scissors that allow you to cut out text and change it. The cell takes over after the DNA is broken and makes a precise change at the site of the repair.”

Dana Foss, a postdoctoral fellow in both Doudna’s lab at Berkeley and Ross Wilson’s laboratory at the Innovative Genomics Institute, explains that our DNA is made up of what amounts to a genetic alphabet, containing the specific nucleotides adenine (A), cytosine (C), guanine (G), and thymine (T) that make up our genes.

“Some of those genes may cause disease,” she says. “If we want to change the sequence associated with a gene of interest, we first have to know the sequence of the alphabet in that particular place. If we know that, we can then go in and change it with CRISPR.”

Simply put, this method involves two key molecules that can target and then cut a sequence of genetic alphabet. Scientists can design a specific piece of ribonucleic acid (RNA), the molecular messenger that carries the instructions from the DNA to the cell, to find and then bind to a specific DNA sequence. Cas9, an enzyme, works with the guide RNA (gRNA) to cleave both strands of DNA. Once the Cas9 does its job, the cell’s own programming will recognize that the sequence is damaged and go in to repair the breach.

“This technique allows you to easily make permanent genetic changes at the site being targeted,” says Sam Sternberg, Ph.D., an assistant professor in the department of biochemistry and molecular biophysics at Columbia University, and co-author, with Doudna, of A Crack in Creation: Gene Editing and the Unthinkable Power to Control Evolution . “For the development of human therapeutics, scientists can use CRISPR to repair a gene with a mutation that is associated with disease. Alternatively, CRISPR can be harnessed to introduce site-specific mutations, enabling the study of how diseases progress in the first place.”

If CRISPR is so easy, why isn’t it being used to treat disease already? Foss says one challenge is that we don’t always have a thorough understanding of the genetics of a given disease to know where and how to make changes.

“A lot of research has to be done to understand what gene is related to what disease. Is it one gene? Is it many? If it is many, what is the specific contribution of a single gene to that disease?” she says. “Unless we have a comprehensive understanding of the genetic underpinnings of a specific condition, it’s hard to know where it’s appropriate to use CRISPR.”

A second issue, Sternberg says, is a problem of specificity. In theory, the programmed gRNAs used in CRISPR should only bind with specific sequences, but they can sometimes end up off-target.

“In the context of a three billion letter genome, there is the possibility that Cas9 might accidentally target and cut the wrong sequence,” he says. “This is a big concern as the changes you make with CRISPR are permanent—and you don’t want to introduce mutations to other places in the genome and cause lasting effects that you never intended to cause.”

There is also what scientists refer to as the delivery problem. How can researchers make sure they are getting CRISPR enzymes into the specific cells they want to edit? How can they make sure that Cas9 is editing dopaminergic neurons in the brain’s substantia nigra and not, say, other cells in the pancreas?

“These molecules need to get to the target cells to do their job and, ideally, not get into other cells that you don’t want to introduce changes to. This is a big challenge when we talk about using CRISPR in the brain. How do we get the enzymes to those cells without causing damage or accidentally affecting other cells?” says Foss. “The first treatments using CRISPR will likely be in blood cells because those cells are really easy to access. You draw some blood, make changes, and then inject the blood back into the body. It isn’t as straightforward when you are looking at other organs or tissue.”

Finally, Sternberg says that relying on the cell’s natural abilities to mend DNA after CRISPR enzymes make their cuts also requires more study before CRISPR can be used in a clinical context.

“As it turns out, the cutting part is fairly easy to control, but the repair part remains a challenge,” he says. “The ways that cells repair DNA breaks are quite heterogenous—and those variations we see in how the cells fix those breaks may have clinical relevance. There’s a huge amount of work going on right now to understand the cellular host factors, or the proteins that are present in cells that are involved with the repair process, and how we can better control the different possible repair pathways.”

In addition, laboratories continue to add to the CRISPR toolbox, identifying new “cutting” enzymes and molecules beyond the original Cas9 to make the different kinds of genetic edits.

Yet, despite these complicated issues, Foss is optimistic that scientists can find ways to overcome these challenges and bring CRISPR from the bench to the bedside in the future.

“The first clinical trials for CRISPR are beginning this year,” she says. “A lot of eyes are going to be on those clinical trials—to see the results as well as other potential problems we didn’t foresee. CRISPR may not be applicable to every single disease. But this is a tool that shows great promise for future therapies. This is definitely a tool we will eventually see used in the clinic.”

CRISPR and the Brain

While the so-called delivery problem makes CRISPR’s use in the brain a challenge, initial studies have already shown CRISPR’s promise in treating some brain-related disorders. Niren Murthy, a professor of biomedical engineering at Berkeley, published a study in the June 25, 2018 issue of Nature Biomedical Engineering, demonstrating that CRISPR could help treat certain symptoms of Fragile X syndrome, a genetic condition known for developmental issues, cognitive impairment, and hyperactivity—namely the disorder’s hallmark exaggerated repetitive movements.

“Therapeutic gene editing in the brain is possible,” he says. “So many neurological disorders are just impossible to treat. CRISPR offers a host of therapeutic applications that simply weren’t available before.”

Gusella agrees. He and his colleagues published a study in 2016 inactivating the single disease mutation that causes Huntington’s disease, a debilitating neurodegenerative disorder, in cells from a patient. He believes that for disorders like Huntington’s, which is “100% genetic and 100% caused by one gene,” we will likely see CRISPR-based therapeutics within the next 10 years. For more complex brain disorders, he says that CRISPR can help researchers better understand the underlying genetic mechanisms of disease.

“In the past, you could knock out a gene or introduce a specific mutation in a cell or animal model—but it was laborious work,” he says. “You can do these things with CRISPR quite easily, and even make much more subtle changes to the sequence or to a gene’s regulation. With multigenic disorders, it gives you the ability to explore the system in much finer detail, to not only understand the magnitude of a particular gene’s contribution, but what specific process that particular gene may be contributing to.”

While CRISPR may once have seemed like the stuff of science fiction—and may even sometimes seem so today—it’s clear that it will offer science much more than revived woolly mammoths and muscle-rich “super dogs.” It is and will continue to be an important tool to help scientists study the brain—and perhaps even treat brain-related disorders—in the future.

“I don’t think the explanation of the actual technique will be easy for many people to understand—but, essentially, CRISPR is a game changer in the sense that it gives scientists new and exciting technological capabilities to go in and make changes to genes,” Gusella says. “Research using this technique can lead to a far greater understanding of, well, everything. It’s really quite tremendous.”