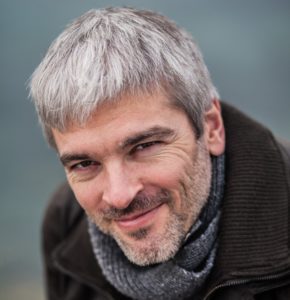 Grega Repovš is the Associate Professor in Cognitive Psychology in the Mind Brain Lab, Department of Psychology at the University of Ljubljana, Slovenia. He is a committee member and past president of SiNAPSA (Slovenian Neuroscience Association). Professor Repovš was named a FENS-KAVLI Scholar 2014-2018.

Your research focuses on cognitive processes and neurophysiological mechanisms underlying working memory, attention, cognitive control, and decision making. What are you currently working on and what are your research goals?

A second focus is on flexible cognitive control, the ability to smoothly switch between different task sets that can engage and depend upon very different cognitive systems and the underlying brain networks. Our specific questions relate to mechanisms that support such switching, which we see at its core as a connectivity challenge. Our main interest and methodological efforts are therefore directed towards the study of functional brain connectivity. To address the open questions effectively, an important part of the work effort is devoted to development and validation of preprocessing and analytical methods of fMRI functional connectivity.

As the only cognitive neuroscience lab at the University of Ljubljana, tightly integrated with psychology and cognitive science programs and unique competences in functional neuroimaging, the lab is also engaged in a number of other projects, ranging from experiencing and responding to music, to neuroeconomy.

We collaborate with both Yale and Washington University in Saint Louis and together have a joint vision to build a bridge that, with the help of computational modelling, relate cellular, system, and behavioral levels of observation in explaining both healthy cognition, and mechanisms that give rise to different psychopathology.

Much of your research involves the utilization of neuroimaging tools and computational sciences. Where do you think we will be in the next decade in terms of advances or refinements of these and new technologies and systems?

Predicting the future is risky. We can look to the past, however, and might unexpectedly identify insights and breakthroughs, which have been missed. Recent experience has shown us that we can expect significant further refinements in theories and models of brain and cognition. Novel advancements in technology will allow us to alter and observe the neuronal system at different levels with even finer specificity, spatial and temporal resolution. Advancements in analytical and computational methods will enable us to make better sense of the huge amounts of data we are collecting, and build ever more accurate and detailed models of the nervous system.

I believe that transformational advancement will come from integrating the three lines of progress, to enable us to connect the dots and see a whole clear picture, with tools that would allow us to build it, which we lack at the moment. We hold very detailed pieces of the puzzle in our hands, but don’t yet know how to fit them together. They may tell very different and apparently incongruent stories. I think that efforts to build an integrated understanding will bring the next breakthrough. I see computational modelling playing an important part in creating recurrent loops between empirical studies and theoretical understanding. But the true advancement will depend on our ability to build our own mental models and intuitive understanding of our subject of research.

Another strong trend I see is translation of basic findings into practical use. The pressure is mounting from the health challenges we face – businesses looking for the next profitable opportunity – requirements now embedded in many large (EU) grants. But, there is a danger of over-promising and missing fundamental scientific insights due to the pressure of not only publish-or-perish, but also monetize-or-dwindle ideology

You have been honored as a FENS-KAVLI Scholar 2014-2018. What challenges do you face as a neuroscientist still early in your career? What have you learned from your fellow scholars? Could you tell us about some of the activities planned for the FENS Forum 2016?

Many of the biggest challenges I face are neither unique to neuroscience nor common with research colleagues from western Europe and northern America, but specific to science in Slovenia. First, the system is slow. There are very few opportunities for (financial) independence for young scientists fresh from graduate school, and the path to an independent career is long. A qualified Ph.D. or a postdoc with her own lab and startup funds is unheard of. Sadly, the only way to advance quickly is to be a part of the “brain drain,” flowing to established western organizations. Those that remain are often considered incapable.

Second, the community is small. Though it enables close collaborations and tightly knit teams, the lack of peer reference and support is real. Whereas at the Washington University in Saint Louis, where I did my post-doc, you could walk up and down the hall and find top researchers from many fields of cognition or neuroscience and pop in for a discussion, such opportunities are scarce in Ljubljana. One crucially depends on foreign collaborators, and I was lucky to have developed these relationships during my post-doc.

Third, because of the lack of funding, dedicated research positions in neuroscience and psychology are few and far between. Researchers are, to a large extent, also full time teachers or clinicians, some of them both. Teaching and resolving administrative issues, in the face of reduced university funding, takes a serious toll on time and energy needed for research, and often relegates it to an after-hours “hobby.”

These are the challenges that to a large degree are not shared by other members of the FENS-Kavli Network. Interestingly, the common solution we see for our disparate problems is better accessibility of EU grants for individual researchers. The statistics, though, are not encouraging. The 13 countries that joined EU in or after 2004 won only two percent of the flagship ERC Advanced Grants given to individual Ph.Ds. It seems that the specific issues we face reduce our competitiveness, but there might also be a difference in attitude. What I have learnt, or hope to learn, from my colleagues in the Network, is the daring to reach outside of perceived limits and my comfort zone and have the confidence to take risks and tackle big issues.

The Network hopes to promote some of those sentiments at a number of events organized during FENS forum. It will announce the recipients of the best Ph.D. and best mentor prize in neuroscience for the years 2014-2016 and take part in a “Your Guide to Independence: Building a Successful Career in Neuroscience” social hosted by the European Journal of Neuroscience. Some of the activities will also be aimed at sharing our fascination with the brain and showcasing the most interesting areas of neuroscience to lay audiences. Events included evening pub talks, “science speed dating,” and “Blending science and cooking: a complete sensory experience.”

You were a founding member, secretary, and later president of SiNAPSA, the Slovenian Neuroscience Association. What goals did you have during your term as president, and were you able to accomplish them? How has SiNAPSA changed since its inception in 2003?

In 2003, SiNAPSA was borne out of the desire of a small group of individuals to create a neuroscience community that would foster an exchange of ideas, facilitate research collaboration, share its enthusiasm and findings about the brain with the public, and advocate for better support of research efforts. With support from IBRO and FENS our initial successes were impressive. Within a year of inception we organized a most successful international Cognitive Neuroscience Summer School on Working Memory, our first international neuroscience meeting, and inspirational and memorable Brain Awareness Week activities, with an accompanying web portal that garnered interest from the public.

The initial successes were brought about by a small group of highly motivated and dedicated individuals. The challenge that we faced, which became the focus of my term as president, was to show that we are not just a lovely shooting star that burns out with the initial enthusiasm, but that we can transform into a stable organization that reliably fulfills its mission in the long run. Not an easy task for a budding specialized professional society in a small nation of two million (roughly the population of Baltimore or Stockholm), without stable income and in the middle of a severe economic crisis.

During my term, we were successful in establishing SiNAPSA Neuroscience Conference as a regular biennial meeting, bringing together neuroscientists from a wider region, hosting established scholars in the field, as well as providing a forum for advanced students and young scientists. These efforts were rewarded with a successful bid for the 2011 FENS Featured Regional Meeting.

Next, we managed to build a small team, affectionately named “Gube” (pronounced  “gubeə” and roughly translated as “folds” or “wrinkles,” alluding to brain gyri and sulci), which took over the organization of BAW activities. Though membership constantly evolves, each year Gube attracts a collaboration of psychology, cognitive science, and medical students, as well as numerous outside partners from all corners of Slovenia. Together, they prepare innovative events that attract public interest and bring neuroscience closer to the people.

In 2008, we restructured a number of separate websites, devoted to individual projects, into a comprehensive web portal with news tidbits, short popular science articles, an events calendar, BAW materials, event archives, an email newsletter, and more. The site serves both neuroscientists as well as the wider public interested in the brain and neuroscience.

In 2011, we established eSiNAPSA, a web journal for scientists, professionals, and neuroscience enthusiasts. The biannual journal publishes peer-reviewed papers, book reviews, event reports, and popular science articles with the hope of fostering the development of our small Slovenian neuroscience community.

Along with participation in FENS and IBRO activities, as well as EDAB initiatives, SiNAPSA has started the transition towards a mature society. With its slowly evolving “enthusiast/renegade” perception, it still has a way to go, and is crucially dependent on dedicated individual volunteers.

You and your fellow Alliance member Maja Bresjanac have been instrumental in advocating for public education and outreach about the brain and brain research. Due to efforts led by the Slovenian Neuroscience Association (SiNAPSA), the Slovenian government declared National Brain Day on March 16, 2016. Please talk about the importance of this, in particular for Slovenia.

The initiative to declare National Brain Day was part of wider neuroscience advocacy efforts to raise awareness about the challenges we face, both as individuals and as a society, with the increasing incidence of brain related diseases. We educate the public about the progress, current issues, and obstacles in neuroscience in addressing those challenges. We provide information and opportunities for individuals and organizations to get actively involved.

Our previous efforts in organizing Brain Awareness Week (this was our 13th year) have shown that the lay public is genuinely interested in understanding the brain, both in health and disease. We hoped that establishing a National Brain Day would provide additional legitimacy to the cause, and much needed acknowledgment by the government of Slovenia, about the importance of issues we face.

We also hope that a declaration of a National Brain Day would provide a much needed impetus for many professional and patient organizations, which individually do amazing work, to coordinate their efforts and activities, and more efficiently address common goals and challenges.
With the first National Brain Day, we started that process and the response from media, general public, and governmental agencies was promising.