Back to Parent Page
HomeArticlesDiamond in the Rough World of Neuroscience 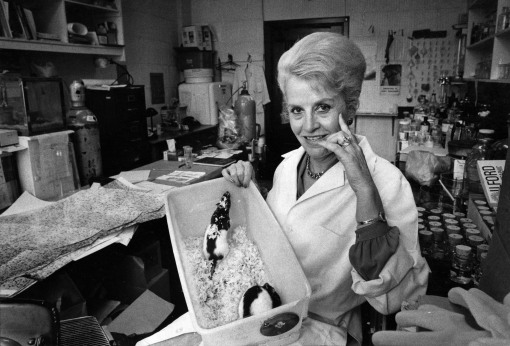 Dr. Marian Diamond, a brain researcher at the University of California at Berkeley with laboratory rats in 1983. Diamond is a professor of anatomy at the University of California, Berkeley, who has published research into the neuroanatomy of the forebrain, notably the discovery of the impact of the environment on brain development, the differences between the cerebral cortex of male and female rats, and the likely link between positive thinking and immune health. (Eric Luse/San Francisco Chronicle/Polaris)

We have the ability to change our brains. Throughout life, even into old age, new neural connections can be formed. However, the idea the brain can change, called brain plasticity, is relatively new. Before 1963, scientists theorized that the brain remained static after birth and environment played no role in its potential.

The woman who changed the conversation around brain plasticity, Marian Diamond, professor emerita of integrative biology, University of California, Berkeley, was the subject of “My Love Affair with the Brain: The Life and Science of Dr. Marian Diamond,” a documentary that aired this week on PBS.

Diamond focused on proving that the brain is shaped by environment, not just genetics. She performed an experiment where one group of rats were kept in enriched cages, with toys and other rats to socialize with, while another group lived in impoverished cages, with no other rats or objects to interact with. Rats housed in enriched cages had brains that were six percent larger than the rats in impoverished cages. She reacted to this finding by running across the campus to tell her research partner the results. “This will change science,” he told her. And it did.

The experiment was initially met with criticism, doubt, and even anger. Not only was Diamond challenging the universally accepted understanding of the brain, she was also one of a few women in a male dominated field. When presenting her research at the American Association of Anatomists, an attendee stood and shouted, “Young lady, the brain cannot change!” to which she replied, “I’m sorry sir, but we had an initial experiment and a duplicate experiment that showed it could.”

Plasticity is now integral to our understanding of the brain. Follow up studies by other neuroscientists not only reaffirmed Diamond’s work, but also identified types of enrichment techniques that help the brain, such as exercise, meditation, and bilingualism, and factors that can impair it, such as isolation, sleep deprivation, and low socioeconomic status. Diamond advised that a good diet, exercise, challenges, newness, and love were all important for a healthy brain. “Use it or lose it,” she famously said.

Diamond’s groundbreaking work from the 1960s changed our understanding of the brain and fueled further accomplishments in neuroscience and public service. She was the first to publish studies on Albert Einstein’s brain and conducted humanitarian work utilizing enriched environments to help impoverished children in Cambodia. The documentary pointed out that she may have inspired as many as 60,000 students in her years teaching at UC Berkeley and others across the globe with the second most watched college course on YouTube.

To learn more about Diamond’s incredible life and research, check out “My Love Affair with the Brain: The Life and Science of Dr. Marian Diamond,” which can be viewed on PBS or ordered as a DVD.