May-Britt Moser and Edvard I. Moser

British-American researcher John O’Keefe and Norwegian researchers May-Britt Moser and Edvard I. Moser were awarded this year’s Nobel Prize in Physiology or Medicine for discovering “an inner GPS, in the brain,” that makes navigation possible for virtually all creatures. The Mosers, members of the European Dana Alliance for the Brain, wrote on their research for Cerebrum in March: “Mapping Your Every Move.” Here’s Cerebrum editor Bill Glovin’s post on the essay from then:

Earlier this week, a study published in the journal Neurology reported that Alzheimer’s disease may be killing more than 500,000 people in the U.S. each year, making it possibly the third leading killer behind heart disease and cancer. As Brain Awareness Week (March 10-16) approaches, it’s as good a time as any to take stock of whether neuroscience is getting closer to finding a treatment for Alzheimer’s disease. 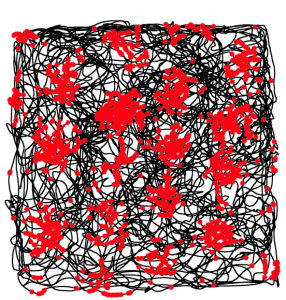 While the Obama administration’s $100 million Brain Initiative and the European Union’s $1 billion Human Brain Project give us reasons to hope for the future, the research outlined in “Mapping Your Every Move,” Cerebrum’s March feature, provides reason for optimism right now. Authors Edvard Moser, Ph.D., and May-Britt Moser, Ph.D. of the Kavli Institute in Norway are among a determined group of researchers worldwide who are making slow but steady progress in research that could lead to Alzheimer’s treatment.

In their article, they write about the discovery of what they call a grid cell, a type of neuron that is central to how the brain calculates location and navigation. Grid cells—first found in the brain’s entorhinal cortex in 2005—“create a regular, triangular grid by firing when an animal passes over equally spaced locations,” write the authors. “The grid looks very much like the pattern on a Chinese checkers board.”

In 2008, the Mosers and another lab simultaneously reported the existence of yet another type of neuron, called a border cell, which fires when an animal is near its environment’s border, such as a wall or an edge.

Ongoing research hopes to reveal how the grid-cell navigation system communicates with neighboring place cells, border cells, and head direction cells in the hippocampus, a part of the brain critical in forming memories.  All of these cells affect spatial awareness, memory, and decision-making. The role of other cells in the hippocampus and entorhinal cortex isn’t as clear: “What is the role of the cells that are not actually part of the sense of direction?” ask the authors. “They send signals to place cells, but what do they actually do? This remains a mystery.”

The Mosers, who were inspired to become neuroscientists long before Brain Awareness Week was first introduced in 1995, are second-generation college students from remote islands on the outer west coast of Norway. After meeting in a psychology course at the University of Oslo in 1980s, they were encouraged by a professor and moved by a collection of articles in a special issue about the brain published in Scientific American in 1979. Their ascent as neuroscientists helped them establish the Kavli Institute for Systems Neuroscience and the Centre for Neural Computation at the Norwegian University of Science and Technology. In 2013, they were awarded Columbia University’s Louisa Gross Horwitz Prize. Of the 91 Horwitz Prize winners to date, 43 have gone on to win Nobel prizes.

The Mosers hope to inspire other young people to neuroscience through their work and their institute, which collaborates with Kavli Institutes at Yale and Columbia universities and UC-San Diego.  Their institute offers lectures and a Kavli Prize; their website includes an interactive game and articles and videos about their research that have appeared in the New York Times, Science Magazine, and Scientific American.

Their Cerebrum article concludes optimistically:  “Slowly but surely, we and other researchers are expanding our understanding of other parts of the brain to figure out how everything is connected. And because everything is connected, we are hopeful that as we and others make ever more detailed maps of neural networks, we become more and more likely to find clues that will help prevent and cure brain diseases in the future.”