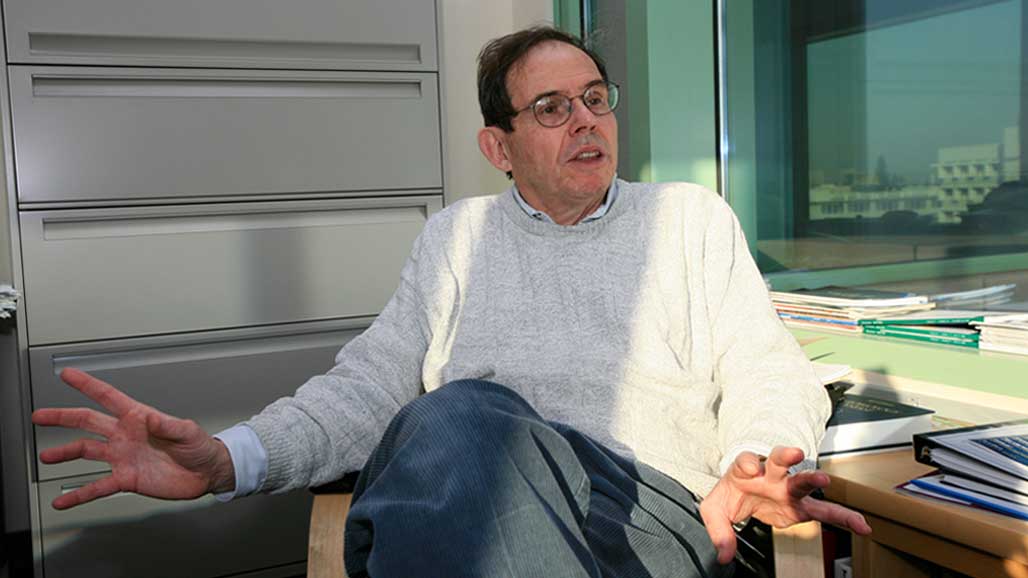 
Canavan disease is a rare neurological disorder that begins in infancy and progresses rapidly: Affected infants do not develop muscle strength, cannot keep their heads up, and have trouble eating; most die in infancy or early childhood. Although Canavan disease is rare, it is prevalent among Ashkenazi Jews—about one in 60 people of this background carry a mutation causing the disease. The mutation inactivates an enzyme that is needed to break down the amino acid NAA. NAA then builds up in the brain, where it destroys the brain’s white matter. Currently, there is no therapy for children with Canavan disease. Researchers have attempted to “correct” the faulty gene—but without much success.

David Pleasure, M.D., distinguished professor of neurology and pediatrics at the University of California—Davis and director of research at the Institute for Pediatric Regenerative Medicine, has been working on a different approach. Here, Pleasure discusses recent success in a mouse model of the disease and what it would take to transfer such an approach to people.

How did you become interested in studying Canavan disease?

I’m an adult and pediatric neurologist and have been interested in disorders of myelination in the brain—that is, disorders that affect the insulation in the brain that protects signal passage. Canavan disease is listed as a classic demyelinating disorder. A chain of reactions is important for how Canavan disease arises, and how it can be treated: The enzyme NAT8L is needed to make the amino acid N-acetylaspartate (NAA), while the enzyme aspartoacylase cuts NAA to make other products. In patients with Canavan disease, mutations prevent the action of aspartoacylase; because NAA is no longer being cut it builds up in the brain to levels vastly higher than normal. I look at what effects this higher level of NAA has on the brain. Originally, I became interested in Canavan disease because it has some peculiar features that didn’t seem classic for myelin sheath disorders. For example, although the mutations causing Canavan disease affect a gene carried by glial cells called oligodendrocytes, the disease predominantly affects astrocytes, another type of glial cells.

What are you trying to achieve with this work?

At this point, there’s no effective therapy for infants and children with Canavan disease. People have tried various manipulations, including giving lithium citrate. The most promising trial tried to replace the mutant aspartoacylase gene, using a viral vector to deliver a functional aspartoacylase gene into the brain. This would give patients a working enzyme that could cut NAA. Several laboratories have shown that this approach works in mice, but there’s a problem:  The human brain is so much bigger than the mouse brain and we don’t have an effective viral vector to deliver the aspartoacylase gene. Unfortunately, this promising study, which tried to deliver the aspartoacylase gene to the brain of infants and children with Canavan disease, was not successful. I then thought about another approach. My hypothesis was that the massively higher levels of the amino acid NAA, usually broken down by aspartoacylase in healthy brains, might have something to do with the brain degeneration in Canavan.

What’s the evidence for this hypothesis?

There are a couple of hints. One is that the brain is enlarged in infants with Canavan disease: Both astrocytes and the myelin sheaths of neurons swell. This swelling suggests that the build-up of NAA has a harmful effect on brain salt-water homeostasis. If that were the case, then by inhibiting the production of NAA, you might have an innovative therapy that would be more effective than the gene therapy targeting cutting of NAA via aspartoacylase.

So while the previous approach tried to replace the faulty gene, your approach would be to stop the excess production of NAA?

Yes. NAA is synthesized by the enzyme NAT8L and broken down by aspartoacylase, the gene that is inactive in Canavan disease. We try to inhibit the production of this pathological metabolic intermediate, NAA. By modifying the gene that codes for NAT8L, needed to make NAA, only a small amount of the amino acid would be produced; this could limit the build-up of toxic NAA.

What is the function of NAA?

NAA was thought to be essential for brain myelination. The idea was that neurons make NAA and then export it to oligodendrocytes. In healthy brains, the oligodendrocytes then cut NAA using aspartoacylase to make acetate, which would be necessary for myelination. If that were the case, by inhibiting the production of NAA you might cause the brain not to myelinate properly. But we made a line of mice that could not make NAA—and those mice myelinated pretty normally. This suggests that it is not true that NAA is essential for brain myelination.

How do high levels of NAA then affect the brain?

How did you develop a potential therapeutic approach?

Our next step was to try and see whether we could develop a therapy that might be applicable to infants with Canavan disease. Initially, we developed a viral vector mediated knockdown of the enzyme that makes NAA, so of NAT8L. But it turns out that while this approach works well for knocking down gene products in newborn mice, it doesn’t work very well in older animals. This leaves us with a practical problem: Canavan disease is often not diagnosed until later in a baby’s development. At diagnosis, babies would then already be suppressed in their psychomotor development. So we asked two questions: Could we develop a method applicable to older animals with Canavan disease? And secondly, when a mouse has already developed the neuropathologic changes of Canavan disease, or the baby has developed astroglial swelling and demyelination, can you reverse these damages?

Were you able to reverse symptoms in your most recent study?

What are the next steps for getting this possible therapy to babies and infants with Canavan disease?

We are addressing a couple of additional questions. One question is, can you prolong the therapeutic response by giving these GapmeRs every few months? This works in spinal muscular atrophy and we’re trying to see whether it works in mice with Canavan disease. Second, the human and the mouse NAT8L enzymes have become different during evolution. The antisense oligonucleotide that turns off NAT8L in mice therefore does not turn off NAT8L in humans. We’re now revising the antisense oligonucleotide so it would be effective in humans. This would be the next step toward potential use in babies with Canavan disease, and is work ongoing now. A third challenge is that the human brain is a lot bigger than the mouse brain. We would very much like to have a large animal model for Canavan disease, to show the efficacy of using the GapmeR approach before we test safety in humans. But Canavan disease is, of course, a rare disease, and developing a large animal model is very expensive. Our lab also focuses on understanding exactly how NAA causes toxicity in the brain, again with a view toward developing an effective therapy.

How do you think treatment for Canavan disease will develop in future?

The standard intervention, at this point, for Canavan disease is genetic counseling. But since Canavan disease occurs in all populations and genetic identification of carriers is not standard in most countries, babies are still being born with the disease. One would like not only to treat these babies before they develop the disease, but also to reverse the disease in infants who have already developed symptoms. The ultimate goal would be to correct the mutant enzyme, but that’s a long way off, I think. What may happen is that suppressing NAA synthesis, which we are working on, will be an intermediary step toward the eventual development of an effective gene therapy targeting the mutant enzyme. Sometime in the next ten to 20 years, such a gene therapy probably will work.