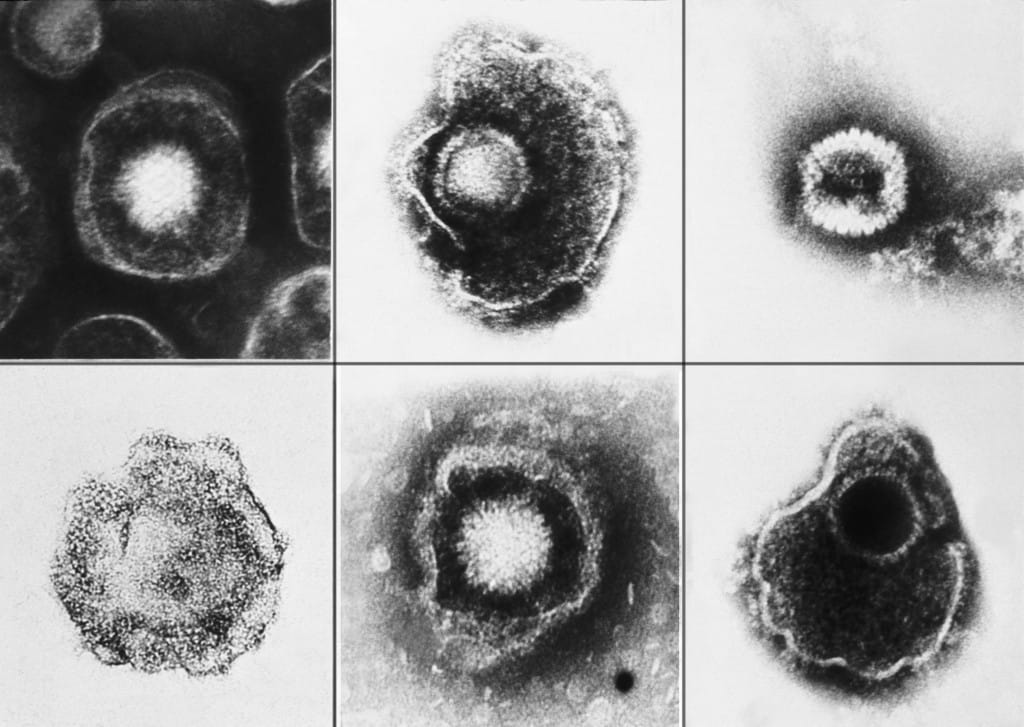 Suddenly, it seems, Alzheimer’s research is crawling with microbes.

An outlandish metaphor, perhaps, but the growing attention to viruses (and to a lesser extent bacteria) in the search for the origins of Alzheimer’s disease (AD) is hard to ignore. On the cellular, molecular, and population level, recent research has aroused excitement. Clinical trials are underway.

The concept is not new. More than a century ago, Alois Alzheimer considered a role for infection in the disease that bears his name. In the 1990s, Ruth Itzhaki of Oxford and University of Manchester in Britain demonstrated the presence of herpesvirus DNA in the post-mortem brains of the elderly and of people with AD, especially around amyloid deposits.

Other investigators have found evidence implicating bacteria, particularly spirochetes (including the pathogen responsible for Lyme disease) and chlamydia pneumoniae. One recent paper suggested a pathogen involved in chronic gum disease plays a role.

Still, “Everyone laughed at the idea or was hostile,” says Itzhaki. “It’s been a constant battle for over 25 years.”

Researchers have resisted the challenge to the long-dominant amyloid cascade hypothesis of AD because it questions their own work, she believes. “And most don’t know much about viruses, particularly the concept of viral latency—that people can be infected but not affected.”

Such latency is evident in herpesviruses, the microbes for which AD-link evidence is strongest. Almost everyone is infected with HSV1, which is responsible for cold sores,  and the virus is present in normal as well as AD brains. The difference, Itzhaki conjectures, lies in periodic reactivation due to stress or immunosuppression, which allows HSV to kill brain cells. “Damage accumulates,” she says, “and leads to AD.” Carriers of ApoE4, the strongest genetic risk factor for AD, seem particularly prone to HSV1 reactivation, she observes.

Lately, however, “far more people have come into the field [of microbe-AD research],” Itzhaki says. “It started happening about eight years ago, and the number of researchers has increased gradually.” In 2017 and 2018, papers from Taiwan provided “the first population-level evidence for a link between herpes infection and senile dementia,” she wrote in a commentary in the Journal of Alzheimer’s Disease. “And last June, two papers that augment some of our data caught the public eye.”

Neuroscientists whose AD research is unrelated to microbes see a similar trajectory. “I remember hearing about this work back in the late 1990s,” recalls Robert Vassar, professor of cellular and molecular biology at Northwestern University and a member of the Dana Alliance for Brain Initiatives (DABI). “I didn’t think much of it at the time. It seemed farfetched.”

More recent research, he says, is “pretty compelling…. In retrospect, if you look at the progression of these studies, there’s certainly a lot of circumstantial evidence supporting the microbial hypothesis.” Although much more research needs to be done, “it’s paradigm-shifting work,” he says.

To DABI member  Eliezer Masliah, director of the division of neuroscience at the National Institute of Aging (NIA), growing interest in microbes reflects, in part, “more intense questioning of traditional amyloid-tau cascade hypotheses. There’s a search for alternatives.”

There is also “new, very provocative data coming out in recent years, which has contributed to heightened interest,” he says. He, like Itzhaki, points to two papers published in Neuron in July 2018.

“All the other studies were more correlational, descriptive, equivocal,” says Masliah. “These are looking at the issue in a more mechanistic way.”

In one paper, which was funded by the NIA, researchers at Icahn School of Medicine at Mt. Sinai and at Arizona State University analyzed genomic, transcriptomic, proteomic, and histopathological data from postmortem brains of people with signs of AD and others without. Applying advanced computation methods to tissue from three large brain banks, they explored the interaction of viral DNA and RNA fragments with neuronal molecular systems.

They found that human herpesviruses 6 and 7(HHV6,7) were more common in brains that had signs of AD than in non-AD brains, and that viral levels correlated with the severity of dementia. These viruses, moreover, appeared to have an effect on molecular processes in neurons. In particular, they altered the expression of genes that have been implicated in AD, and influenced pathways involved in amyloid production.

Of note, points out Mack Mackiewicz of NIA, the investigators used an “unbiased approach”: they were not testing a hypothesis involving a specific virus, but looking more widely for clues to molecular processes underlying AD neuropathology that might suggest  new drug targets. The HHV6-7 connection emerged from the data.

Studies reported in the other paper demonstrated that introducing herpesviruses into lab dishes of neurons and into the brains of genetically modified mice triggers the formation and deposition of beta-amyloid (Aβ), in forms resembling the characteristic plaques of AD.

Additional experiments described the subcellular process by which Aβ protected the mice against HSV1-related encephalitis and inhibited viral growth in cell culture.

The study came out of the Harvard laboratories of Rudolph Tanzi and Robert Moir, adding a new chapter to 10 years of research that gave rise to what they call the antimicrobial protection hypothesis of Alzheimer’s disease.

Tanzi and Moir have accumulated evidence that Aβ, long thought to be a “functionless” protein, is actually an antimicrobial peptide (AMP), one of a class of molecules important in innate immunity. Against certain pathogens, “Aβ is more powerful than penicillin,” says Tanzi, professor of neurology at Harvard and also a member of the Dana Alliance.

AMPs, “the most primitive, ancient immune host response,” protect against unwelcome organisms and substances by forming extracellular traps to bind and sequester them. “That’s what plaques are in the brain,” he says.

The hypothesis accords microbes a key if limited role in AD; their presence triggers the generation of beta amyloid as a defensive measure. Amyloid induces the production of neurofibrillary tangles, which kill neurons and activate microglia. As neuroinflammation gathers steam, neurons die. “Amyloid is the match, tangles are brush fires, neuroinflammation is a forest fire,” says Tanzi. “Microbes are what’s lighting the match.”

In this formulation, says Tanzi, AD is an “auto-innate immune disorder,” in which amyloid takes the place of antibodies in conventional autoimmune disorders.

The 2018 Neuron paper provides a clear, graphic instance of the “seeding” process that begins the cascade.

The theory can account for the fact that a broad spectrum of bacteria and viruses have emerged as possible AD factors. “We don’t have a favorite microbe; we’re saying a bunch of different ones may be involved,” Tanzi says. There’s a place for the amyloid cascade hypothesis as well, as one step along the road to AD. Since innate immunity is a general reaction to foreign material, the theory suggests a mechanism by which other factors might raise AD risk, such as fine particulate air pollution. (see “Air Pollution Linked to Higher Risk of Dementia”)

Even as the evidence for an AD-microbe link grows stronger, “we are still struggling with ideas of cause and effect,” cautions Mackiewicz. “It is not known whether microbes are causative or a passenger of the AD process.” Long-dormant viruses may be activated by a disease process already underway, in other words, rather than a factor in initiating it.

The role of viruses and other microbes, ultimately, must be understood in the context of other factors, Masliah says. “Aging, neuropathology, the amyloid cascade, certain genotypes—what we’ve learned is that all things leading to the pathogenic process of AD are synergistic; that multiple hits, multiple steps are involved in an interactive process.”

That said, microbe-AD research has progressed far enough to generate novel treatment approaches, and clinical trials of drugs already approved for other uses have begun. An NIA-funded proof-of-concept trial at Columbia University has randomized 130 HSV-positive people with AD to receive the antiviral valacyclovir or placebo. Participants will be followed for 18 months, with tests of cognitive function, and PET scans and CSF studies to assess amyloid and tau accumulation.

Looking further, Ruth Itzhaki would like to see a trial of vaccination. “The earlier the treatment the better,” she says, “and prevention is much better than cure.”