Back to Parent Page
HomeArticlesGet Up, Stand Up: NYU Panel Examines Policy 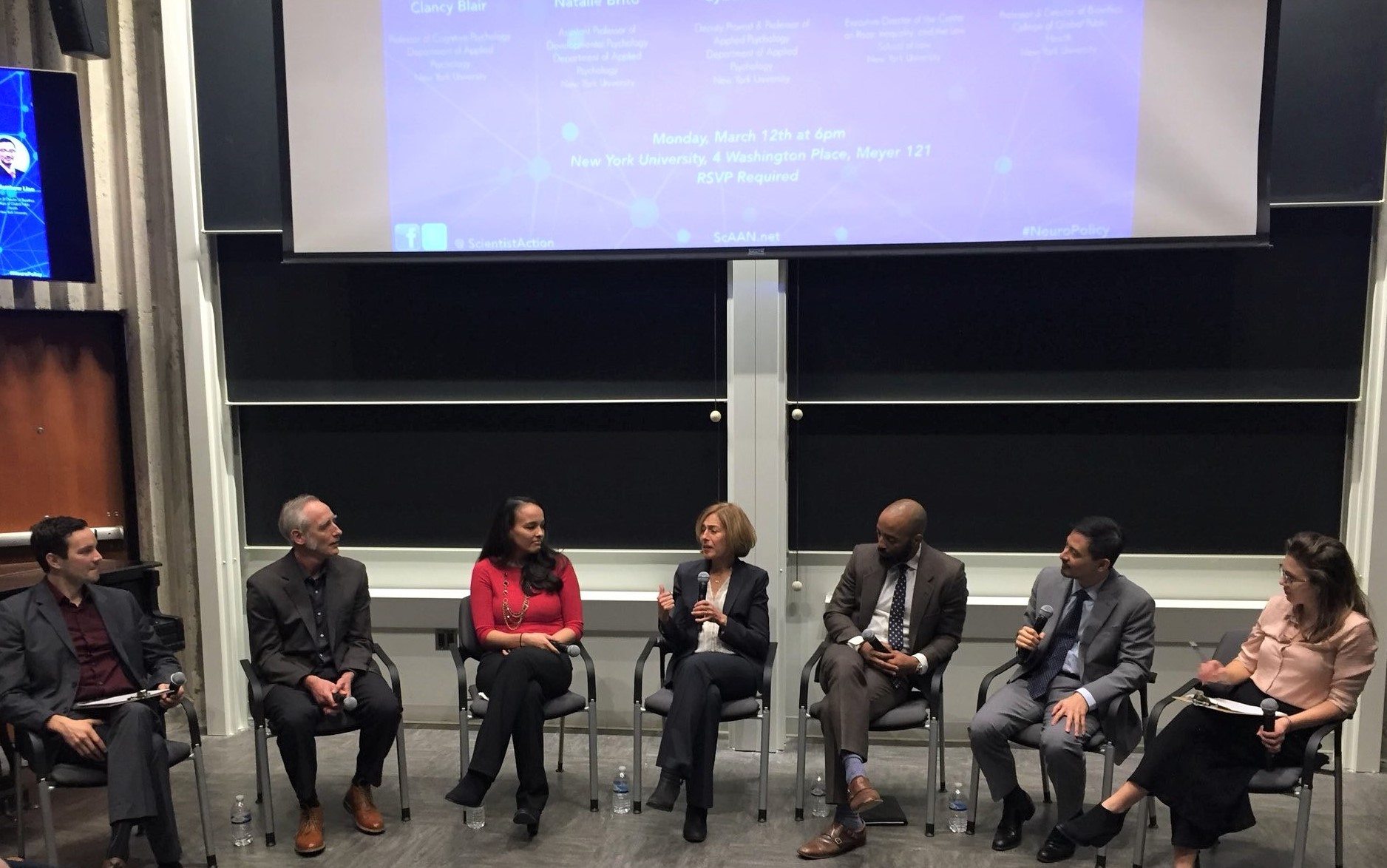 Scientists should advocate for what they believe in—and bring their values to work. “Get up, get into it, be involved,”

Scientists should advocate for what they believe in—and bring their values to work. “Get up, get into it, be involved,” said Clancy Blair, professor of cognitive psychology at New York University. “Be the change you want to see.”

Blair was on an NYU faculty panel at a Brain Awareness Week event, “Neuroscience, Inequality & Social Policy,” organized by the Scientist Action and Advocacy Network (ScAAN) a group of students and researchers who aim “to bridge the gap between science and society, and make science a force for social change,” according to moderator and doctoral student and ScAAN member Stephen Braren.

To the panelists, this clearly and passionately meant fostering social and economic justice.

“Neuroscience has a huge role to play in closing the gaps of inequality,” said Vincent Southerland, executive director of the law school’s center on race, inequality, and the law.

“As scientists, we’re trained to think we’re unbiased,” said developmental psychologist Natalie Brito. Many fear if they take an activist stance, their science will be perceived as compromised. “But it does not bias your research,” she maintained. “You still have to do good, reproducible work. By going at social issues head on, you’ll find new value in your work.”

Working to promote social change through science is not for the impatient or faint of heart, panelists agreed. “The law is incredibly slow to change,” Southerland said. “It’s built on precedent, on maintaining power. There’s resistance to incorporating science into decision making.”

But there are successes, said panelists, offering examples of how neuroscience has moved public policy. Raising the age of criminal responsibility in New York, from 16 to 18, drew on findings that brain areas that temper impulsivity and strengthen executive function are still maturing in adolescence. Brain research provided evidence for legislative reform of the use of solitary confinement—and for universal pre-K.

S. Matthew Liao, professor of bioethics, proposed that neuroscience can strengthen moral arguments. “When I wrote a book defending children’s right to be loved, neuroscience was essential to my argument, with evidence that those who grew up in impoverished homes, with inaccessible carers, had smaller hippocampi, and much higher stress levels that affected their development.”

The discussion turned to practical matters. When findings have social and political resonance, the press often takes a lively interest, and “scientists sometimes have a hard time getting the big picture across,” said Brito. “Explaining science to the media, making sure they interpret studies correctly, is key.”

She described research, in which she had taken part, that examined over 1,000 brain scans and found socioeconomic factors and education to have an impact on brain structure. “They were small effects, and we weren’t making huge claims,” she said. “The press was awful. ‘Poverty shrinks the brain.’ ‘Poor kids have small brains.’”

Cybele Raver, professor of applied psychology, offered another example of good data gone astray, in hearings on early education interventions and child-care subsidies. “As neuroscientists, we lay out all this evidence suggesting these not only serve ethical goals, but are cost-effective. But it turns out a senator’s chief of staff has a relative who runs a for-profit day care center, and her family tale trumps science. We need better practice at telling our story.”

Enlisting community members to speak of their lives is a good strategy, she suggested. “It’s hard to deny their experience,” Sutherland added. “Backed up by science, it’s the most ironclad argument.”

Going a step further, “listening to the communities we’re studying will have a huge impact.” She described a study regarding an intervention to increase the quality of language interaction in low income families, to get them to talk more to their children, to have more activities with them. Results were disappointing.

“Then we met with the moms, and found a lot of them weren’t implementing the activities and strategies we were promoting because they’d felt discriminated against for using Spanish, and tried to switch to English with their kids. Once we added socio-linguistic pride to our intervention, their use of it increased. The families felt, “maybe this can help.’ We’d never have tried this if we hadn’t had open-ended conversations with our demographic.”