Back to Parent Page
HomeArticlesHow Do You Measure Moral Wounds of War? 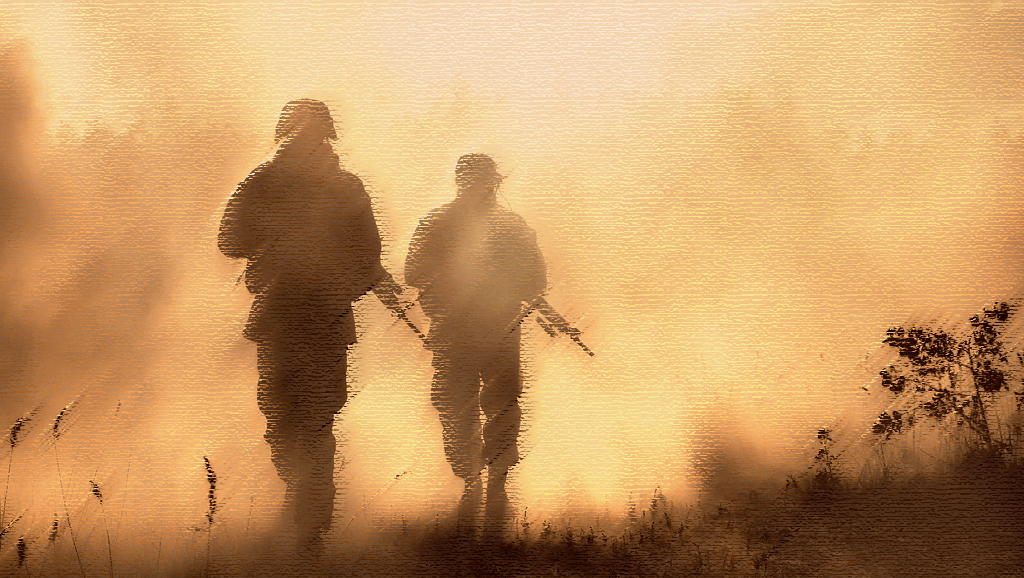 Many war wounds are bloodless but devastating: witness the flashbacks, nightmares, and emotional wreckage of post-traumatic stress disorder (PTSD).

Such injuries are not limited to the terrors of battle. Soldiers kill—it’s the nature of war— sometimes the enemy, but sometimes innocent civilians. The life-and-death stakes of war demand absolute obedience to authority, an obedience that may be abused.

The psychic legacy of war’s deep ethical disruptions—what has come to be called moral injury—has been a growing concern of those who seek to understand trauma. Papers on the subject have increased dramatically over the last decade. A full issue of the Journal of Traumatic Stress was devoted to it last year.

“We’ve known about PTSD for a long time,” says Delin Sun, of Duke University’s PTSD and TBI imaging lab. “But a prerequisite of PTSD is the experience of a life-threatening event, and some patients who had no such exposure experience the same kind of disorder,” with similar symptoms.

More specifically, “researchers and clinicians are recognizing the need to expand their knowledge about veterans’ mental health, especially about those coming back from conflicts that involved civilians, and had witnessed or were involved in atrocities or other events that were morally questionable to them,” says Yuval Neria, director of trauma and PTSD at New York State Psychiatric Institute.

“We’ve been seeing those patients for years and years, especially after Vietnam,” he says. “But now there seems to be more openness to expand the narrow definition of PTSD to include dimensions of moral injury.”

Personal transgressions aren’t the only source of harm, Neria says. “A sense that your country, your commander, your fellow combatants will take care of you… that together you will achieve your goal” is essential in the military. “When that is replaced by lies and selfishness, it leads to a deep feeling of betrayal.”

The first application of the term “moral injury” to the combat context—a 1994 book, Achilles in Vietnam, by psychiatrist Jonathan Shay —is about such betrayal. In a recent interview, he compared its effect on veterans he treated over several decades to the “wrecking ball” of severe childhood abuse. “Many of these individuals expect harm and exploitation in the way other people will come at them. It’s a horrible way to live.”

Moral injury occurs in civilian life as well, says Brett Litz, professor of psychiatry and psychology at Boston University. “The possibilities are endless: a motor vehicle accident where brakes give out and your family dies but you survive—and find out corporate malfeasance and poor government oversight were to blame. [Or] You drive while intoxicated and kill your best friend.”

Ethical infractions per se are commonplace, says Litz. “Guilt and remorse are part of the human condition, not a clinical phenomenon. There’s a continuum of moral stressors, which differ in magnitude, impact, and prevalence.” Moral injury represents the far end of the spectrum, where normal, adaptive responses—guilt and shame that promote adherence to social norms—are amplified into pathology.

A key question for those who study moral injury is its relationship to PTSD: “whether PTSD already includes moral injury symptoms or the two are separate conditions,” says Neria. “If they are [distinct], the next hypothesis will be that they share very little in underlying mechanisms; if there is overlap, it will [suggest] that mechanisms are shared, at least partially. All that is important in regard to treatment—whether we need to develop completely new treatments to address the moral dimension of psychological injury, or not.”

Clinically, the two have different causes.  According to the National Center for PTSD, that condition “develops after experiencing or witnessing a life-threatening event, like combat, a natural disaster, a car accident, or sexual assault.” The precipitating event for moral injury, on the other hand, involves a “a betrayal of what’s right,” in Shay’s terms. As for symptoms, moral injury shares three of the four criteria used for PTSD diagnosis—intrusive thoughts and re-experiencing (such as flashbacks), avoidance of situations or  people that may bring the precipitating event to mind, and negative changes in beliefs and feelings, like depression, guilt, or increased anger. But while people with PTSD are subject to hyperarousal—constant vigilance for signs of danger, and a heightened startle response—those with moral injury are not.

Are these differences enough to justify to make moral injury a separate diagnosis, rather than a variant of PTSD?  “We don’t know yet,” Litz says. Part of the problem is a fundamental uncertainty about the former, he explains. “We don’t have a consensus definition or way of measuring moral injury—so it’s still a construct, a hypothetical idea. I tend to doubt that moral injury is a subtype of PTSD, but I can’t give an answer until we’re measuring something we can call a syndrome.”

Enabling such measurement is a current research focus. Litz is part of an international consortium of investigators who are gathering data from veterans, active members of the military, and clinicians about the lasting impact of morally injurious events, from which to generate operational definitions and a reliable scale.

Current uncertainties notwithstanding, there is ample evidence that moral infractions amplify the severity and persistence of PTSD symptoms, “The association between self-reports of atrocities and [very chronic] PTSD is considerably stronger than global reports of combat exposure and PTSD,” Litz and coauthors wrote in their seminal 2009 paper on moral injury.

Even the prescribed duties of war carry risk. Studies of veterans of Vietnam and the Iraq war found killing anyone—including enemy combatants—to be a significant predictor of PTSD symptoms, functional impairment, suicidal thoughts, and violent behavior.

The same can be said of betrayal. “Moral injury is an essential part of any combat trauma that leads to psychological injury,” writes Jonathan Shay. “Veterans can usually recover from horror, fear, and grief once they return to civilian life, so long as ‘what’s right’ has not also been violated.”

The neurobiology of moral injury might provide powerful insights, but research in this area is scant. The uncertainty factor cited above is partly to blame, says Litz. “You can’t do good science until you’re agreed on the boundaries of the problem and, more important, how to measure it.”

“I think it has to do with cultural divisions within our field,” adds Rajendra Morey, of the Duke Institute for Brain Sciences at Duke University. “People who do research on moral injury tend not to be much into the study of the neural basis of psychiatric conditions, and I think there’s a bit of dismissiveness [of moral injury] among people who do research on the biology of behavior.”

One study analyzed brain metabolism in 35 active-duty soldiers diagnosed with PTSD, comparing patterns in those whose combat-related traumas were and were not based on threats to life. Using PET scans, the researchers found differences in brain areas including the amygdala and anterior cingulate cortex, which are implicated in fear processing, and the precuneus, part of the default mode network (DMN) involved in introspection and moral cognition.

“Non-threat” traumas approximated, but did not map onto moral injury: they included committing or witnessing transgressions, but also seeing the aftermath of battle or the deaths of others.

The first neuroimaging study that explicitly investigated moral injury appeared last year, in Depression and Anxiety. Here, 26 combat veterans of the wars in Afghanistan and Iraq underwent functional MRI (fMRI). They were also evaluated with a scale that assessed exposure to morally injurious experiences and associated distress, and one measuring symptoms of PTSD. The researchers found patterns of regional activation and functional connectivity that varied differently with scores on the two scales.

“What’s important here is the suggestion that moral injury is distinguished from PTSD in its neural presentation,” said Neria, commenting on the paper.

The differences were particularly marked in one area, the left inferior parietal lobe (LIPL): activity increased with MIES scores, but was unrelated to CAPS. “This area is part of the DMN, which appears involved in moral perception,” says Delin Sun, first author of the paper. “Other groups have found [areas activated by] shame and guilt overlap with the DMN.”

The LIPL is also important for “theory of mind,” the ability to imagine other people’s experience. Activity in this region was positively associated with scores on the MIES subscale that measures the “transgression” aspect of moral injury, but negatively with scores for “betrayal.”

This dissociation was not terribly surprising, says Morey, who was senior author. “Transgression means I did something wrong; betrayal, someone else failed me. I think transgression involves the further step of trying to put oneself in another’s place… if you commit a transgression, you think about what it’s like to be the victim, and what others think about you. Betrayal is more about myself.”

In sum, the authors propose that their study, “significantly enhance[s] our understanding of the neural correlates of moral injury” and “document[s] the neural differences between moral injury events and PTSD,” but caution that these findings are suggestive only. “I don’t want to overinterpret their implications,” says Sun. “This is only a first step.”

The researchers plan further investigations into these neural patterns, including comparing more defined subgroups, and measure brain activity while participants perform tasks that involve moral decision-making and activate emotions like guilt and shame. Ultimately, such research could have practical therapeutic applications.

In particular, says Morey, “because some brain areas like the LIPL, important in guilt, shame, and moral injury, are relatively superficial, they may be more accessible to treatments like transcranial magnetic stimulation (TMS) than deeper structures.

“For patients in whom moral injury is exacerbating PTSD, this could have a lot of clinical value.”