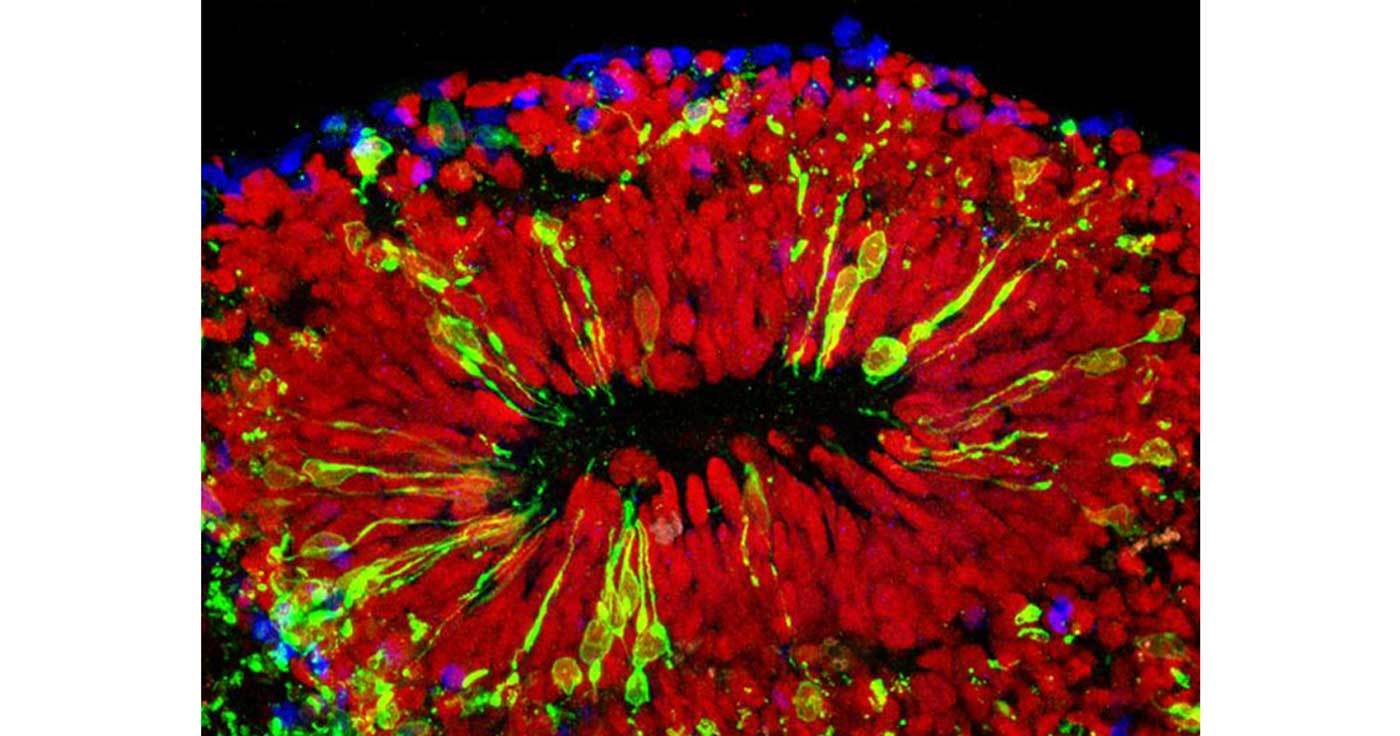 Following the outbreak of Zika virus in Brazil last year, the World Health Organization has declared that Zika constitutes a public health emergency of international concern, and the US Centers for Disease Control and Prevention has confirmed that the virus causes severe birth defects. As of the end of April 2016, confirmed cases have been reported in 49 countries, and researchers estimate that nearly 2.2 billion people in tropical and subtropical regions of the world are now at risk of infection.

Zika virus, transmitted by mosquitoes, was first identified in Uganda in 1947. For most people, infection causes a harmless illness with symptoms such as fever, mild skin rash, joint pain, and conjunctivitis. The virus can cross the placenta, however, so infection during pregnancy can cause a severe birth defect called microcephaly. Two new studies have determined the molecular and cellular events that link infection to this defect.

During the earliest stages of embryonic development, the nervous system consists of a hollow tube packed with stem cells called radial glia. As their name suggests, radial glia have fine processes that span the radius of the neural tube; their cell bodies, located in the inner lining of the tube, divide to produce immature nerve cells, which attach to their parent cell’s radially aligned fiber and then crawl along it towards the tube’s outer lining.

Immature nerve cells migrate along radial glial fibers in waves to generate the six layers of the cerebral cortex; each successive wave migrates past the previous one—the layers are formed ‘inside-out.’ Microcephaly, characterised primarily by an abnormally small brain, is believed to occur due to the depletion of neural stem cells in the developing brain.

They found that a protein called AXL is expressed in various cell types, and is particularly enriched in radial glial cells and the endothelial cells that make up the lining of blood capillaries. AXL is a cell surface receptor that drives cell growth, proliferation, and survival, and has been implicated in the growth of malignant gliomas, the most common and most aggressive brain tumors.

The researchers then used antibody staining to examine the distribution of AXL protein in intact fetal brain tissue. This showed that AXL is present throughout the developing cortex, particularly in the region containing dividing radial glial cells, along the lateral ventricle, and also in brain capillaries.

Closer examination revealed that the protein is localized within the end-feet of the radial glial cells, which come into contact with the inner and outer linings of the neural tube. Levels of the protein remain high in radial glia and brain capillaries throughout the developmental period when brain cells are being formed.

Previous research has shown that Zika virus uses the AXL cell surface receptor to infect human skin cells, and these new results suggest that it uses the receptor to gain entry into neural stem cells in the developing brain, too.

The second study used cerebral organoids, to model Zika virus infection at different stages of brain development; it shows that Zika not only infects neural stem cells, but also inhibits their growth and increases cell death.

The forebrain organoids grew to form six-layered structures containing all the cell types found in the cortex. Those exposed to Zika virus for just one day during the earlier stages of growth showed exhibited reduced proliferation, as well as increased cell death, of neural stem cells. As a result, they were significantly smaller than those which were not exposed, and had thinner cell layers as well as larger ventricles—features that mimic microcephaly in humans.

The experiments also showed that limited exposure to a very low dose of Zika virus led to an increase in the number of infected cells with time. Even transient exposure to the virus can have severe detrimental effects, and helps to explain why infections that occur during the first trimester of pregnancy are the most dangerous.

Together, these results seem to explain why the developing brain is particularly vulnerable to Zika virus infection, and how infection during pregnancy might cause microcephaly: After crossing the placenta, the virus could enter the brain via the bloodstream or the cerebrospinal fluid, both of which are contacted by radial glial end-feet. Once it has infiltrated the brain, the virus preferentially destroys the radial glia, the ‘founder’ cell population that normally generates all the cell types in the cortex, leading to microcephaly.

More research is needed to determine how the virus crosses the placenta, and how it triggers the death of neural stem cells, but cerebral organoid systems may allow researchers to gain a better understanding of the mechanism of infection.