Back to Parent Page
HomeArticlesKeeping a Close Eye on Organoids 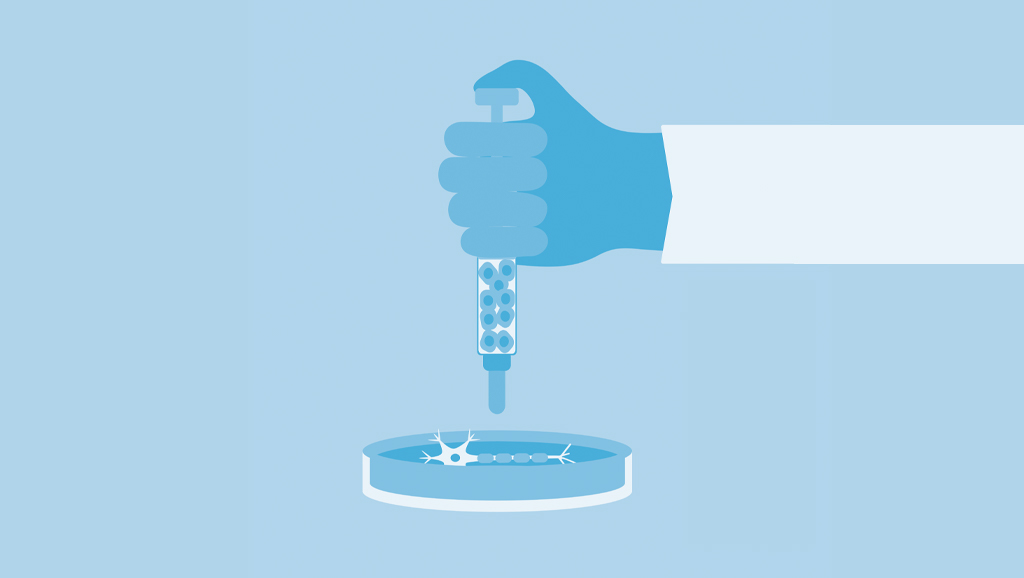 I was astonished to learn while writing a column on the brain-computer interface in 2019 that patients with amyotrophic lateral sclerosis (ALS), whose brain signals were fed into a computer, could control a complex robotic arm, having it pick up a pitcher and pour water into a glass, just by thinking about it.

So you can imagine my surprise when I learned that scientists have achieved comparably difficult tasks—not with signals from a human brain—but simply from a clump of stem calls in a Petri dish.

The achievement is clearly described in Alan Alda’s Clear+Vivid podcast featuring Alysson Muotri, a Brazilian citizen who is director of the stem cell program at University of California, San Diego, where much of this pioneering work was performed. The podcast is a useful complement to a more comprehensive report issued on April 8 by the National Academies of Sciences, Engineering, and Medicine.

As Alda’s introduction explains, Muotri uses factors that drive skin cells to revert to stem cells and then become brain tissues that self-organize, forming “brain organoids in a dish. Muotri, who has a personal interest because he has a son with autism, hopes to learn how early brain development can change course in conditions like autism and epilepsy—and how our brains differ from those of our evolutionary? cousins, the Neanderthals.

Although some people call what he has created “brains” or “mini-brains” in a dish, Muotri is more circumspect, describing them as “brain organoids.” The entity, he says, is a miniaturized version of some of the tissue of the brain (containing 2.5 million neurons, the equivalent of a bee brain) that in some aspects behaves like the human brain. As the organoids become more complex, you can see the brain cells oscillate in unison as they start communicating with each other and generate electrical signals that mimic human neural development.

Muotri’s other main focus is to study how the brains of Neanderthals differ from the more complex brains of modern humans, or Homo sapiens. He postulates that if we can understand how this complexity arose, we might understand why our human brain is so susceptible to developmental conditions such as autism.

Evolutionary biologists have identified 61 genes that are different between us, the Neanderthals, and all other species. Muotri and his colleagues have focused on one of those, called NOVA 1, which regulates hundreds of downstream genes, so “if you’ve messed with that one, there are hundreds of other genes that will change as well.” He suggests that species carrying an archaic form of that gene may have earlier gestation or maturation times akin to chimpanzees, whereas humans who have a mutated form of that gene take much longer to mature.

In a feat I found astonishing, Muotri’s team stuck a probe in a Petri dish to generate signals from an organoid that controlled the movements of a tiny robot. Electrical signals generated in the Petri dish were fed into a computer that told the four-legged robot how to move. The robot had infrared detectors that told when it was getting close to a wall. It sent a signal back to the organoid which then sent a second message to the robot to walk back. Eventually, Muotri anticipates that the organoid will do much of this spontaneously in what might be considered learning.

The biggest risk of all these ventures, Muotri says, is that someday an organoid might reach a point of consciousness or self-awareness. His team has ethicists and philosophers watching how the research develops.

The National Academies report, entitled “The Emerging Field of Human Neural Organoids, Transplants, and Chimeras: Science, Ethics, and Governance” and partially sponsored by the Dana Foundation, found strong moral arguments in favor of research on these laboratory entities, namely the potential for new knowledge to relieve human suffering and mortality caused by brain disorders, provided that certain ethical protections are in place.

The report’s committee also deems it “extremely unlikely that in the foreseeable future” organoids would possess capacities that would be recognized as awareness, consciousness, emotion, or the experience of pain. “Thus, it appears at present that neural organoids have no more moral standing than other in vitro human neural tissues or cultures.” That could change in the future of course, but for now, as one leading researcher told a reporter from Science magazine, the public and funding agencies can be “reassured that nobody is tromping on any ethical boundaries or lines at the moment.”

There is always concern that organizations dedicated to advancing science—as the National Academies surely are—will give short shrift to ethical constraints. But the committee seems to have conscientiously kept ethics front and center. By my count, 5 of the 11 committee members were experts in ethical or legal issues. The committee also heard from a wide range of ethicists, religious scholars, and legal experts.

There is no doubt that the research is potentially valuable. Each year tens of millions of individuals suffer from neurological and psychiatric disorders for which treatments are often completely lacking or only partially effective. These include neurodegenerative diseases such as Alzheimer’s and Parkinson’s and neurodevelopmental disorders such as autism spectrum disorder, depression, and schizophrenia.

The dearth of treatments is due, in large part, to the difficulty of conducting research on an organ containing roughly 86 billion neurons interconnected by trillions of synaptic connections in intricate circuits. Unfortunately, the tools for studying such complex circuits are limited. While research using animal models has advanced understanding, their brains are very different in key respects from the brains of humans, which helps explain why disease treatments that show promise in animals often fail to work in humans.

Direct studies of the human brain are seldom feasible for technical, legal, and ethical reasons, so researchers in recent years have developed new models to study the human brain. The three models evaluated in the Academies’ report are:

(1) Human neural organoids, which are tiny three-dimensional aggregates of human neural cells, no more than four millimeters in diameter, grown in the laboratory from stem cells. They are useful research tools because they exhibit some developmental, cellular, and molecular features seen in portions of fetal human brains.

(2) Human neural transplants, which insert human stem cells into the brains of nonhuman animals. These transplants enable the study of human neurons, glia, and other brain cells in the context of the behavior of a whole nonhuman animal.

(3) Human neural chimeras, which are a special case of transplants in which stem cells are injected into a nonhuman animal very early in embryonic development. They intermingle with the host cells that form the brain. To date, chimeras that develop to fetal stages have only been generated using rodent stem cells put into rodent hosts. But research is advancing rapidly, and it is possible that viable chimeras could one day be generated from human cells injected into the blastocyst of nonhuman primates.

The hope is that these new models may yield insights into brain development and function, disease mechanisms, new therapeutic targets, and better screening of potential new treatments. But as the power of the models advances, so do the ethical concerns they raise. These include the blurring of distinctions between human beings and other animals, the welfare and rights of research animals, and consent from the people whose cells are used for this research, among other issues.

One paramount concern is that an organoid comprised of human cells might somehow achieve consciousness and experience pain or distress. How to prevent that from happening would require a much broader inquiry with lots of public input, the committee said. It believes that current oversight mechanisms, such as institutional review boards, will suffice for the near-term but that additional oversight may be needed in the future.

This article first appeared in the Summer 2021 issue of our Cerebrum magazine. Click the cover for the full e-magazine.