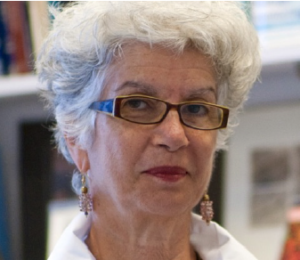 Carol Ann Mason, Ph.D., is a professor of pathology and cell biology, neuroscience, and ophthalmic science
at Columbia University, as well as the
co-director of the Doctoral Program in Neurobiology. She is the president of the Society for Neuroscience.

You’ve written about the importance of getting young people interested in neuroscience. What are some strategies?

The most popular activity is to take the brain to the classroom, particularly in underserved schools. Even one-time visits are incredibly popular and memorable for the students.
It is also important when female scientists are leading the visit, to defend the idea that women, too, can be scientists.

Teaching and mentoring on a longer time scale are additional ways to engage young people in science. For example, the highly competitive Science Honors Program at Co-lumbia offers Saturday morning enrichment classes across the sciences for students from all socioeconomic classes. The BRAINYAC (Brain Research Apprenticeships in New York at Columbia) program allows underserved or minority high school students to perform authentic mentored research in our neuroscience labs. Supported by Columbia’s new Zuckerman Mind Brain Behavior Institute and the Pinkerton Foundation, the students train in the winter for a full-time, five-week lab experience in the summer. Columbia invites high school biology teachers to participate in research projects during the summer. In all of these efforts, our graduate students and postdocs teach and mentor and they too receive invaluable experience. These activities occur year-round.

What about the rest of the public? What are some programs for them?

The Brain Bee, after-school science fairs, and the World Science Festival expose neuroscience to families; many parents are newly fascinated and amazed by the wonders of science. I am personally very grateful to the Dana Alliance for their support of many of these activities. Its co-sponsorship of BraiNY, the New York City-wide Brain Awareness Week activities, stands as an outstanding model of what can be done in outreach to the public.

An important but often underused way to reach the lay public is through lectures by scientists. Rockefeller University has sponsored didactic lectures for the adult public and Columbia is starting a series through the Zuckerman Institute.

The Society for Neuroscience encourages its local chapters to mount public outreach activities and advocacy events in addition to the usual scientific symposia. These can be combined, for example, in a public symposium on a disease topic, with local lawmakers invited as guests.

Other effective ways to communicate with the public include visits to Capitol Hill to speak to legislators and inviting local legislators to tour a lab. The Society for Neuroscience provides superb training on how to speak to members of Congress and their staffers on the value of fundamental research and how to argue that sustained funding is important for our economy and the health and cures for disease of our citizens. A recently posted SfN webinar explains why advocacy is important and how to convince your faculty (or if you are a student, your mentors) that it is vital for us all to engage the public.

Writing op-ed or informational pieces in lay language newspapers is another route to communicating with the public. This year for the first time, SfN and its Public Education and Communication Committee is sponsoring a symposium on communicating science, and scientists who have written for the popular press and science writers will make presentations.

Throughout your career, what has changed with respect to women in the neuroscience ﬁeld? Have these changes been positive or negative?

In my generation (the 60-70 age group), more women hold faculty positions than when we started out. We continue to see an equal number of women entering graduate school, but subsequently, more women seek other science-allied careers than men, and fewer go on to do a postdoc. Women especially don’t see how they can handle running a lab or get funding to do so, all while juggling a family and life. As in other fields, the generation following us has been more worried than we were about family, career, and the economy. We set them up to think they could have it all. We know now that you can juggle a lot, but it takes patience, good mentoring, and luck to succeed. Two arenas that have not changed are the number of women at the top—always less than 20 percent over the last two decades—as full professors, deans, and department chairs. And we seem to be at a standstill in providing good childcare at the institutional level, making life for young families all the more difficult.

On the brighter side, SfN’s iWIN project has changed the way recruitment is progressing. Funded by the National Science Foundation, this project has exposed the issue of gender bias in men and women, and workshops for neuroscience department chairs have brought recruitment of women into focus. This training seems to be working, because several women candidates we’ve interviewed have each had 15 interviews for faculty positions; the down-side is that 14 of the institutions recruiting them may have lost their only woman candidate because there are so few to draw from.

What can still be done to increase the number?

We need to continually increase awareness of bias and the low numbers cited above. Many of my male colleagues think we’ve done well in the last years in promoting women. So we need to campaign more and more and remind others of gender imbalances before every meeting for recruitment, promotion, and selection of award winners.

For the ﬁrst time ever, both SfN and FENS have a woman as president. Is that of special signiﬁcance to you?

Yes. I am the ninth woman SfN president out of 45 since 1969, but for FENS, this is a first. Even though the Europeans have made strides in childcare, they are less successful in selecting and promoting women. A recent flurry of articles on the dearth of women in high places in many fields of endeavor, and on gender bias and equality, mirrors heightened interest in the topic. Inspired by my days in Berkeley during the Women’s Lib movement, I have written a call for action for women in neuroscience, and will soon be writing about career choices for young trainees. FENS president [and EDAB member] Marian Joels and I have banded together to campaign against the stalling of progress and to expose the challenges ahead for women in neuroscience. We have written an article, “A Tale of Two Sexes,” for the journal Neuron, and we will both speak at a symposium on Women in Neuroscience at the FENS meeting in July in Milan.

Can you tell me about your current research?

For all my life, I have worked on visualizing neuronal form in fine detail, through embryonic and postnatal development into adult-hood. I moved from insects to the vertebrate brain during my postdoc, and for many years worked on both the cerebellum and visual system. At the end of the ’90s, we and others in the field turned to the fruits of molecular biology to understand how specific patterns of growth and connectivity arise.

In the last three decades, I have focused on the development of the visual system during the guidance of retinal ganglion cell axons to their target regions. We have asked how fibers from each eye grow to the brain to lay down the circuit for binocular vision. We started out visualizing growth cones of these two populations in fixed and live embryonic brain, as they cross through or turn away from the midline at the optic chiasm. We then identified a mulecular program of a receptor in the retina and ligand at the midline that mediates the repulsion of the chiasm midline by the uncrossed or ipsilateral fibers, including a transcription factor directing expression of that receptor.

Some years later we worked out the receptor system for retinal axons crossing the midline and we are currently identifying the genes that control the expression of these receptors. Instead of one receptor-one ligand to implement this behavior, a consortium of receptors and ensemble of ligands at the midline orchestrate midline crossing. Such synergistic molecular activities are emerging as the rule for axon guidance scenarios elsewhere in the nervous system.

In recent years, we continue to parse the developmental and molecular hallmarks of retinal ganglion cells that grow ipsi- and contralaterally. First, we have asked how fibers from the same and opposite eye converge in their targets and end in segregated synaptic zones. We observed that if retinal axons do not properly cross or remain ipsilateral, as in mice lacking certain guidance molecules, targeting is also aberrant. This work then led us to discover that the fibers from each eye were also distinctly segregated in the tracts leading to the target. We are currently deter-mining how this segregation is molecularly implemented and whether tract segregation is necessary for the formation of a segregated pattern of synaptic terminations.

In decoding how the visual pathway from eye to brain forms, we hope to understand how to make these axons better regenerate. Our findings on the distinct genetic makeup of the two populations could help to stimulate stem cells to develop into retinal ganglion cells.
Throughout my career, I have been fortunate to have many students and postdocs who creatively attacked these questions.