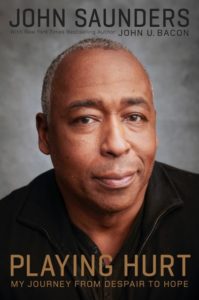 In the introduction to Playing Hurt: My Journey from Despair to Hope, Saunders writes that he wanted “to reach out to the millions of people, especially men, who think they’re alone and can’t ask for help.” As a black man and a former athlete, Saunders, who appeared on ESPN and ABC in various roles from 1986 until his death in August of 2016, was a member of several cohorts often hesitant to admit mental health problems.

He, too, was resistant for many years but eventually sought out help from therapists and psychiatrists. The book chronicles those visits. “I still have bad days and even bad weeks,” he writes of his depression. But with the help of a combination of therapies, “bit by bit, day by day, I’m getting better and better.” He died, at 61, after collapsing in his home. An autopsy determined the cause of death was a combination of an enlarged heart, complications from diabetes, and dysautonomia, an autonomic nervous system disorder.

Playing Hurt, co-written by John U. Bacon, was nearly finished before Saunders’ death. With the help of Saunders’ family, friends, and physicians, Bacon completed the book, released last month. He says he has already heard from “dozens if not hundreds” of readers grateful that a prominent figure shed light on an important but often private topic. Of the book’s potential readers, it was those suffering from mental health issues and their families that Saunders most wanted to reach, Bacon said.

That desire comes across clearly in the book, as Saunders provides specific details about his mood, medications, and doctor visits. He doesn’t dance around painful memories. We get inside his head when he has suicidal thoughts, and Saunders is refreshingly honest when describing depression.

Sometimes my depression is so bad that I’m reduced to a point where happiness is nonexistent. Nothing can cheer me up. The good things in life can’t reach me because I’m too far down. It’s like the world used to be in color, and now it’s black and white. Everything still looks the same, but nothing feels the same. There’s no color, no joy.

He writes about the “cruel realization” that neither money, success, nor the love of his family can protect him from the disease. Saunders, whose sister also suffered from depression and died from an overdose of antidepressant medication at 41, did have a supportive family. But their well-intentioned encouragement wasn’t always helpful. His brother or wife telling him to attack the day with a positive attitude undermined the seriousness of his condition.

“It’s not simply a matter of bucking up,” Saunders writes. “You’re not just ‘bummed out.’ It’s like you’ve been poisoned, and you just want someone to give you the antidote.”

There is a stigma associated with mental illness that doesn’t apply to someone with more-visible trauma. “This is one of the central problems, I think, people with depression have to face: the inability to explain your situation to people you meet who can’t see what you’re dealing with. … With depression no one sees your wheelchair. So they think you’re fine, and if you try to tell them you’re not, you come off as a whiner. So you learn to keep your mouth shut, which probably doesn’t help things either.”

Staying silent, which Saunders did for too long, didn’t improve his condition, but therapy did. Skeptical at first, he even found group sessions effective (“Some of the best help we received came from each other.”) There is plenty of other practical advice for people coping with mental illness and their families, such as the importance of keeping track of medications and asking questions about their purpose.

He writes positively about his cognitive therapy sessions with a psychoneurologist who suggested he assign a number, 1 through 10, to his mood throughout a day. Sanders noted his depression level was a 10 when he woke up and remained there as he stayed in bed for an hour. It improved to an 8 when he went downstairs and used his computer. When he presented his log at a subsequent meeting, the doctor chimed in.

“Okay, what do we know, right now? Those two things—lying in bed and sitting on the edge of the bed—those don’t work. Getting out of bed will not solve all your problems, but it will help.”

Saunders began getting out of bed as soon as he woke up to prevent himself from starting the day with a depression spiral. And he maintained regular appointments.

“Depression is a medical issue that warrants treatment,” says Richard Dopp, a clinical assistant professor at the University of Michigan and a member of the school’s depression center. “Everyone has ups and downs in their mood, but there’s times when that dip starts to interfere with how we’re functioning. Once we’re not functioning at our best, it’s time to do something about it.”

Dopp provided feedback on a manuscript of the book and understood Saunders’—and others’—reluctance, at times, to act. “I think in the current and former athlete group, and even in others, there’s the ‘keep your head down, keep grinding, keep pushing through’ mentality. But that gets old after a while.”

In 2013, Saunders wrote and recorded a two-minute video commentary on mental health awareness for a White House campaign. No one affiliated with the campaign was aware Saunders suffered from depression. In the video, he references his sister and begs listeners who need help to get it. At the time, he was not ready to go public with his illness. With Playing Hurt, he was.

“Don’t hide behind a mask that allows others to believe everything is fine,” he tells the camera. “Talking about your issues will relieve the isolation and allow your support system to grow. … Not only should you talk about it, you need to talk about it.”