Back to Parent Page
HomeArticles‘Mini-Brains’ in the Works 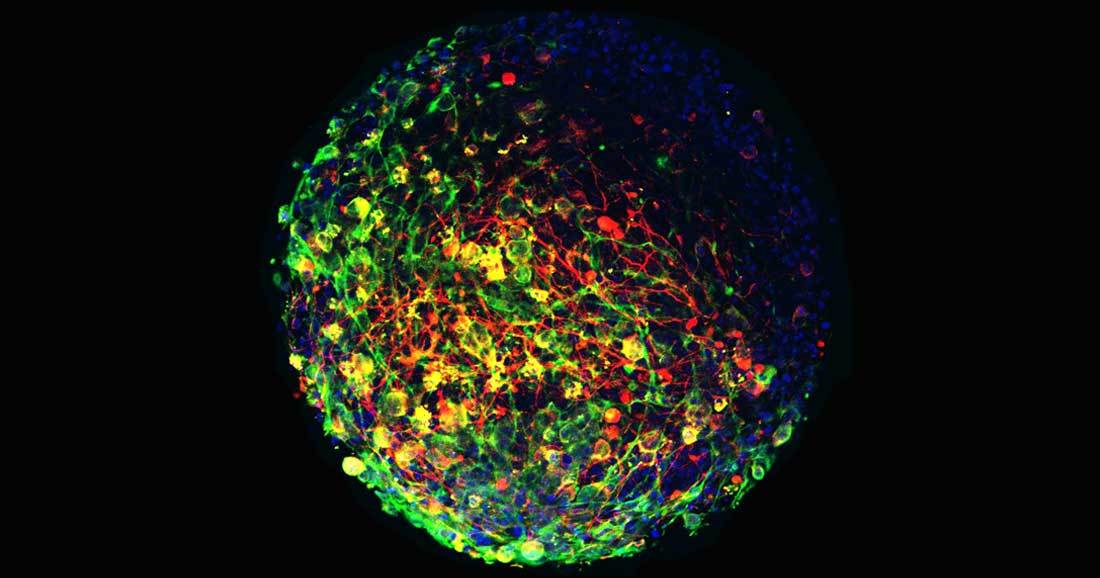 Brain research is moving into a new dimension, thanks to a cluster of cells the size of a fly’s eye. This is the organoid, a tiny organ-like structure derived from human adult stem cells to replicate some of the basic properties of a living brain. As a system that promises advantages over both neuronal cell cultures and animal models, the so-called “mini-brain” is currently being tried out in studies of everything from addiction to Zika virus.

An organoid differs from the standard neuronal cell culture in two ways, Thomas Hartung of Johns Hopkins University, one of the principal investigators, explained at the AAAS annual meeting in February. First, because it develops from stem cells, it includes not just one but several of the different types of cells found in a brain, with each type carrying out its own distinct functions. Second, because the organoid takes shape as a three-dimensional clump, it offers a closer approximation to the real organ inside the human skull than does the single layer of cells that can be grown by standard in vitro techniques. In the growing organoid, many more cells come into contact with one another than with the surface of the cell plate, Hartung said, adding, “The cells have a much greater chance of finding partners. They are starting to exchange electric signals spontaneously, and I think this is why we see circuits forming,” in the same way that signaling pathways form in the living brain.

For scientists who must keep each step of their experiments as standardized as possible so that colleagues in other labs have the possibility of replicating their results, one of the most appealing features of organoids is that all of them in a given batch represent identical samples. Each organoid in a batch carries the same genome and has been developed in the same environment.

Hartung’s recipe for organoids starts out with human skin cells, reprogramming them into neural progenitor cells that then differentiate into signal-transmitting neurons and several kinds of support cells. Because the progenitor cells continue to differentiate into more specific cell types as they mature, the organoids must be made available for research at just the right stage of development. This will be the business of the newly incorporated company Organome, which Hartung has formed under a license agreement with Johns Hopkins University while he continues in his academic capacity as chair for evidence-based toxicology at the university’s Bloomberg School of Public Health.

Large numbers of identical organoids could be especially useful in the field of neurotoxicity, helping researchers determine whether exposure to certain chemical compounds are harmful to the brain at particular stages of development. For example, the Environmental Protection Agency (EPA) has shown interest in using organoids to test for neurotoxins in pesticides. Disease agents, too, can be investigated by this means: Hartung’s lab has recently joined an international consortium studying the effects of Zika virus on the developing brain. Other possible applications include getting a close-up look at the effects of stroke or other trauma.

Wilson Compton, deputy director of the National Institute on Drug Abuse (NIDA), hopes that research using organoids will shed some light on the developmental nature of addiction. “Mini-brains derived from different genetic backgrounds might be used to test for differential responses to drugs of abuse,” he says. In addition, because many substance-abuse disorders emerge during adolescence—a critical period in the development of the brain—it might be possible to use custom-developed organoids as a rough facsimile in which to test new approaches to treatment or intervention.

The prospect of organoids in the lab isn’t altogether a surprise to Compton. “People have been working on these organoid models for several years,” he observes. Shortly after international research teams had come up with three-dimensional cultures of human skin, lung, and liver, Madeline Lancaster and Juergen Knoblich in Austria published the first accounts of a cerebral organoid in 2013. In the United States, research along these lines is supported by the National Institutes of Health (NIH); last year, for example, Tariq Rana of the University of California-San Diego received a five-year grant for his research using organoids to study the effects of the human immunodeficiency virus and methamphetamines on the developing brain.

While research with organoids continues to gain momentum, some experts are sounding a note of caution to keep expectations in check. The term “mini-brain” is useful as a kind of lab shorthand, but a cerebral organoid is not really a small version of a real brain. This assortment of neurons has no blood vessels to supply nutrients and oxygen, and it cannot organize itself into the many specialized units needed in the brain of a living animal: one group of cells to regulate appetite, another group responsible for moving muscles in the limbs, and so on.

On one benefit of using organoids in research there is wide agreement: It could significantly reduce the need to use animals for testing. Hartung, with his research background in toxicology, is particularly aware of this boon—in fact it supplies a central motive for his work, including his role at Johns Hopkins as director of the Center for Alternatives to Animal Testing. The humane appeal of this work is recognized in Europe as well: for instance, Madeline Lancaster has recently received a prestigious award from the UK’s National Centre for the Replacement, Refinement and Reduction of Animals in Research for her research with Knoblich that produced the first cerebral organoid.

For all the potential value of this versatile new means of research,  or some areas of neuroscience will likely remain beyond the scope of what can effectively be studied by means of such a model. In the study and treatment of mood disorders such as depression, for example, organoids may be of limited use because these ailments affect signaling circuits that extend to so many areas of the brain, encompassing not only thoughts, memories, and feelings but also physiological functions such as sleep and appetite. Yet even here organoids could make some contribution, replacing animal models for the testing of new candidate drugs to reveal likely side effects. “In and of themselves, mini-brains are a tool” rather than a complete solution, says Compton. “They’re not going to take the place of clinical trials, but they may be able to get you to clinical trials much sooner.”