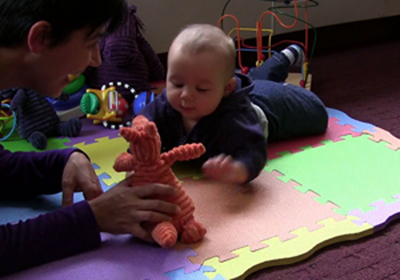 You and colleagues recently published a study in PLOS One that failed to find a causal effect of music training on particular cognitive functions, which has been widely reported in the popular press as a debunking of the so-called “Mozart effect,” the idea that music makes you smarter. Have the media reports fairly represented this new research?

Elizabeth S. Spelke: The negative findings we reported in that article generated a surprising amount of interest, but I don’t think of our research as debunking any claims.  I believe the conclusions we can draw (and did draw) from that study are quite modest. We tested for effects of six weeks of music classes on preschool children’s numerical and spatial abilities. An initial study provided evidence for such effects, but the evidence was weak, so we replicated the study on a new sample of children. That second study failed to provide any evidence for positive effects of music instruction on any of our cognitive measures; neither did analyses of the two studies combined. There are limits to the positive conclusions that can be drawn from these findings, and so our primary conclusion was negative. We found no evidence that the music classes we provided enhanced children’s mathematical abilities.

What does this say about the scientific process and the importance of replication?

If you’re studying something important—and I think music classes are important—you need to make sure that your findings are robust enough to be replicable. I’m very glad that we repeated our original experiment before publishing any findings. Such replications are not always available for studies that get a lot of media attention. As a result, media coverage sometimes leads to conclusions that are premature, because initial findings are trumpeted before anyone has had a chance to assess their robustness or probe their significance in depth.

In any event, when we attempted to replicate our first study, we were unable to do so. I think our PLOS One paper makes clear that the conclusions one can draw from this failure are limited. We did not conclude that music instruction has no cognitive benefits for preschool children, because there may be benefits that our study failed to reveal. We simply reported that we tested for such benefits and failed to find them consistently.

The media response to this paper is indicative of the huge amount of public interest in the potential effects of music learning on cognition. A lot of assumptions have been made, but little solid evidence exists. Can you speak to that?

I agree with the main points that Sam Mehr, the lead author on this research, made in addressing the media that covered this story. First, the direct evidence in favor of the effects of music instruction on cognitive abilities was never terribly strong; there was reason to raise questions about those effects quite independently of our research. Second, music and the other arts have their own intrinsic rewards. Public discussion of arts education should focus first and foremost on its inherent benefits, rather than on extrinsic benefits such as enhanced mathematical ability.

Can you expand on this idea of “intrinsic reward.” Has that been a convincing argument for the folks who are trying to promote arts and music in the schools?

One point that Sam Mehr made is that the alternative argument—that one should keep music in schools or bring it back into schools because it makes you better at math—has not been terribly effective at keeping arts in the schools either. This argument has been promoted for a while now, and it has not produced an increase in the presence of music and art instruction in public schools. A better argument for arts instruction, Sam suggested, is that a well-rounded education embraces multiple disciplines and doesn’t simply attempt to teach a limited number of skills to which tests are geared.

Human cognition is multifaceted: it covers many domains and gives rise to many skills. Educational systems should embrace this richness and diversity. I think that’s a better argument for arts instruction than any promised benefit in particular domains like mathematics.

There seems to be a sense among researchers who study arts and cognition that there are inherent benefits, but we just haven’t been very good at nailing them down scientifically. What are the next steps in this line of research?

We’ve seen one benefit in our laboratory that I’m excited about, but it needs to be studied much, much more. We have reason to believe that music has social benefits that enhance children’s learning from other people. One striking aspect of human knowledge is that most of what we know comes not from our direct experience but from our interactions with others. We learn language and many skills from our individual social partners; we learn many other things from other people indirectly, through their writings and other media. There is some evidence that shared musical experiences enhance children’s receptiveness to these kinds of socially transmitted information. I’m intrigued by that evidence, but our studies are at a very early point.

Are you suggesting that one way arts and music training may be beneficial is by making children more receptive to learning in a socially interactive environment?

This is the current focus of my research with Sam Mehr. We are engaged in a series of studies in which we teach songs to parents and they in turn sing the songs to their infants. Then we bring the infants into the lab to see how they interact with other people who sing the same songs as well as other, unfamiliar songs. We hypothesize that music attunes infants’ social attention to other people, and therefore enhances their ability to learn from other people. If that hypothesis is supported by our initial, lab-based research, we hope to test whether this is also true of children who are learning in group settings like preschools and schools. Children’s learning may be richest and most enduring in environments where children can share with others a panoply of human interests and activities, including music. Our studies in this vein are ongoing; we hope to soon have findings that we can discuss publicly.

What’s the bigger picture that you see emerging from science’s ongoing efforts to study the brain effects of music and arts?

Music and visual arts are universal across human cultures, and also unique to humans. These simple facts raise wonderful questions for brain science. Human brains function similarly to the brains of other animals; yet, our species takes these shared biological capacities in dramatically new directions. We have a lot to learn about ourselves from research that probes what goes on in our brains when we experience or create music or visual arts—and what goes on in the brains of our children when we share arts experiences with them. I think these are much more important questions than the question of whether a child will gain a few IQ or SAT points by taking music classes. By focusing on the latter question, we miss the richness of human experience and essential importance of the arts in human learning.

As a scientist, do you think it matters that (as surveys suggest) more than 80 percent of people think that music makes you smarter when the scientific evidence is not there to back it up?

I think questions such as whether music should be taught in schools—and more broadly, whether human societies would be poorer if music were neglected—are important questions. We don’t know the answers yet. I wouldn’t say that people who believe that music makes you smarter are wrong or right. We just simply don’t know enough about the human mind at this point to be able to specify the cognitive impacts of music, or of any of the other activities that people universally engage in. Among all our uniquely human capacities, is there a subset of capacities that are especially important, amid a larger sea of less important ones? My hunch is that all our culturally universal, species-unique capacities for creating knowledge are important, and all should be imparted to our children. But I don’t think science yet bears on this belief.

So I stand by the modest conclusions of our PLoS ONE paper. Our findings don’t debunk any beliefs and they shouldn’t close off research in any area. Quite the contrary: we need more research on arts, cognition and the brain. The arts are a central product of the human mind and a central aspect of human experience. By studying how our minds create them, we’ll gain insight into ourselves.