Back to Parent Page
HomeArticlesNeuroscience and Society: Autism

When we’re trying to help people who have troubles due to autism spectrum disorders, one of the first challenges is definition: What does “autism” mean?

“Autism was and is still currently defined by behaviors,” Dana Alliance member Barry Gordon said, as researchers haven’t yet found solid biomarkers or other internal signals to identify it. “Whenever you read about autism, you might want to dig into what definitions they go into,” he said during a recent discussion at the American Academy for the Advancement of Sciences (AAAS) in Washington, DC. 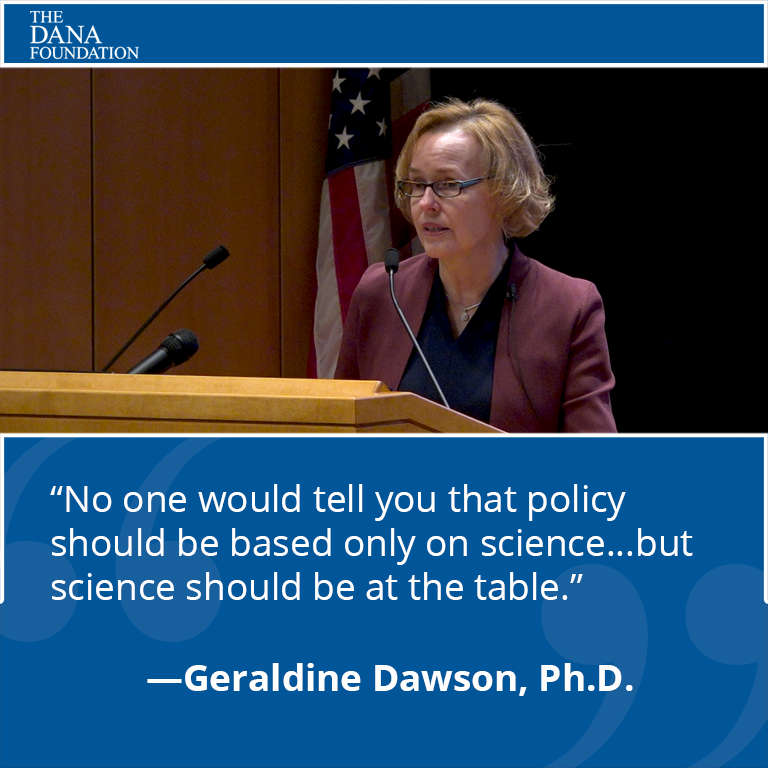 Even definitions by behavior vary. For example, fellow presenter Daniel Geschwind said, problems with language used to be part of the diagnosis, but now doctors and other caregivers usually only count differences in social behavior and the presence of “repetitive-restrictive” behavior (like hand-flapping or always needing to do activities in the same order).

Geschwind, at University of California, Los Angeles, and others are seeking genetic markers that could point to people at risk for autism spectrum disorders (ASD). They have to look at a lot of data: “Autism risk is a combination, in the population, of rare and common variation, and that variation is different for each person.”

We can currently identify around 20 percent of genetic mutations that contribute to ASD risk, he said, but none of them account for more than a tiny fraction of cases: “The top 10 found in genome sequencing don’t account for more than 1 percent,” he said. In addition, these genes don’t just affect autism, but many other behaviors as well. “ASD is on a continuum with normal variation to some degree and overlaps with other neurodevelopmental disorders,” he said. Like a teeter-totter, enough genetic modifications may tip a person into spectrum behavior, shallowly or deeply. “If I have 100 cases of autism, I may have 100 different forms [of it],” he said.

So why bundle all these folks together? “I think it does make sense to have this umbrella term, at least at this point in the science,” said Janine LaSalle, of University of California, Davis. People on the spectrum share common social impairments, if varied, due to a shared range of brain changes. “Those same neural circuits are involved; there is some commonality,” she said. When we reach the stage with autism where we can say for sure what the causes are in each individual case, as we can with problems in other organs like the lungs, our definitions will surely sharpen.

LaSalle and others are investigating gene-environment interactions (epigenetics) that can increase or decrease the risk of problem behaviors. She focuses on our first environment: the womb, saying, “The 4-letter code [DNA] may only make sense when interpreted within the context of the maternal environment.”

So far, they’ve found that ovulation-inducing drugs and ultrasounds do not increase autism risk, but “if a mother gets rubella, it increases risk of autism 50 times over.” There’s not much of a risk of contracting rubella now in the US, but for mothers who didn’t get MMR vaccines as children, it may again be a risk for our next generations. (Many rigorously conducted scientific studies, including an epidemiological study of more than 14 million children, have failed to find a significant association between MMR vaccination or thimerosal and autism risk.) Besides rubella, significant risk factors include gestational diabetes, shorter time between births, maternal and paternal age, air pollution, some pesticides, and flame-retardant chemicals, she said.

Things that are known to be protective include taking prenatal vitamins, such as folic acid and iron (which also help avoid neural-tube defects), and breastfeeding. As a society, she said, we should “value that period before and just after pregnancy as the most important time.”

LaSalle is part of the MARBLES project, which recruits and follows pregnant women who already have a biological child diagnosed with ASD before and after their next child is born. The project aims to pinpoint genetic and environmental causes to help identify other children as young as possible who may be at risk.

Earlier is better, said fellow panelist Geraldine Dawson, of Duke University. The kinds of repetitive and non-social behavior we see in a child as young as two may be “the downstream effect of a child not paying attention to the physical world” for all that time, she said. Interventions to help children navigate their world at this age can result in large improvements in daily life – and great savings in reduced need for special services for a lifetime. One estimate, based on results of a study finished in 2012, estimated the savings at $19,000/year, or roughly $1.2 million in a lifetime. This and other studies use forms of an intensive, repetitive one-on-one training program often called naturalistic developmental behavioral interventions.

Other avenues to help the youngest children include coaching parents to devote extra time to providing extra social stimulation, such as rehearsing responses to faces. Further in the future, Duke is conducting clinical trials on the possible use of oxytocin, inflammation reducers, and even umbilical-cord blood to enhance social interaction skills.

In addition to their very first years, some children with ASD will need a lot of help transitioning into adult status, when they “age out” of many programs targeted to children. Starting these transitions when they are 12 and 13 really helps, she said. For example, preparing for and holding a part-time job in high school can help them practice social skills that can take all of us quite a while to learn.

The good news is that autism often comes with great strengths, LaSalle said: 60 percent of people diagnosed as being on the spectrum are found to be especially strong at some skill that average people find challenging. “There is so much heterogeneity in autism,” she said: It could refer to a person with no language, needing 24/7 care, or it could be the students on the spectrum that she sees thriving at Duke.

This program, held on October 4, was part of the Neuroscience and Society series, supported by AAAS and the Dana Foundation.