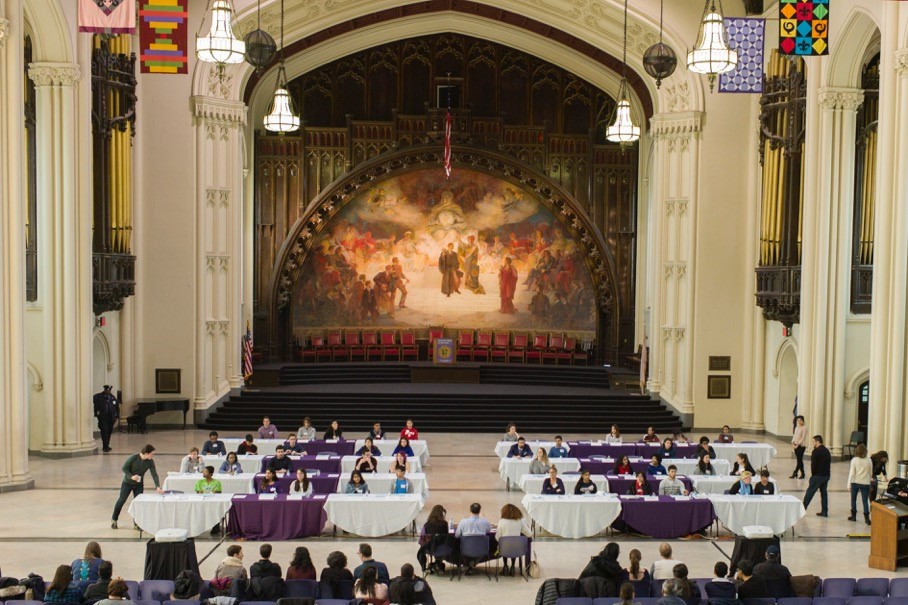 The battle of the best and brightest of brainiacs from New York City’s greater metropolitan area high schools came to its conclusion this Saturday at the 2018 Regional Brain Bee, held in the Great Hall at the City College of New York.

The annual neuroscience competition offers curious young minds the opportunity to flex their gray matter know-how, learn about the latest in brain research, and lets them jump at the chance to get “hands-on” with humanity’s most precious organ—a human brain, in the flesh.

First-place glory and a $500 prize were awarded to Ryan Bose-Roy, 15, a sophomore at Hunter College High School in Manhattan. His path to victory began a little over a year ago, when he competed in the previous Regional Brain Bee and won third place.

“I changed my strategy,” said Bose-Roy when asked about his recipe for success in this year’s competition. His new strategy involved making flash cards based on the official reading material. “I realized that was kind of an effective way for me to just think up questions and then answer them.”

Second-place went to Albert Tan, 17, who is in his senior year at Stuyvesant High School in Manhattan. Third-place was awarded to Amalia Korniyenko, 15, a sophomore of Leon M. Goldstein High School in Brooklyn. Both finalists left with prizes of $300 and $200, respectively.

The competition, in its 16th iteration courtesy of the Dana Alliance for Brain Initiatives, tests the neuroscience knowledge of high school students from New York City’s five boroughs and Westchester County.  Forty competitors from 26 high schools gathered for the event, all vying to win the prize money and an all-expenses paid trip for two to the USA National Brain Bee Championship to be held in Maryland during Brain Awareness Week (BAW) in March.

“A special emphasis is placed on the classroom,” said Kathleen Roina, director of the BAW Campaign at the Dana Foundation, in her welcoming remarks. “And it is hoped that activities such as the Brain Bee will motivate students to learn more about the brain and inspire them to pursue careers in neuroscience.

” Keynote speaker Edmund Au, Ph.D., assistant professor in the Department of Pathology and Cell Biology at Columbia University, served the young competitors food for thought prior to the competition by comparing skyscrapers and city skylines to structures of the brain. “You can almost think of the brain as a city,” said Au, explaining that certain “skyscrapers” in the brain are involved in movement, while others are involved in sensory processing, memory, and emotions.

Bose-Roy credits his visit as a third grader to the Sackler lab at the Natural History Museum for sparking his passion for brain science. He was fascinated and inspired by neuroscientists speaking about their work that day.

Reflecting on competing as New York City’s regional winner in the upcoming USA National Brain Bee, Bose-Roy said, “I’m a little nervous. I know I’ll have to study a lot harder.” If he approaches his studying as he does his finances (he plans on saving the prize money for college) he should do just fine.