Back to Parent Page
HomeBriefingsOxytocin: the Molecule of Love, Trust, Morality, and Sociality? 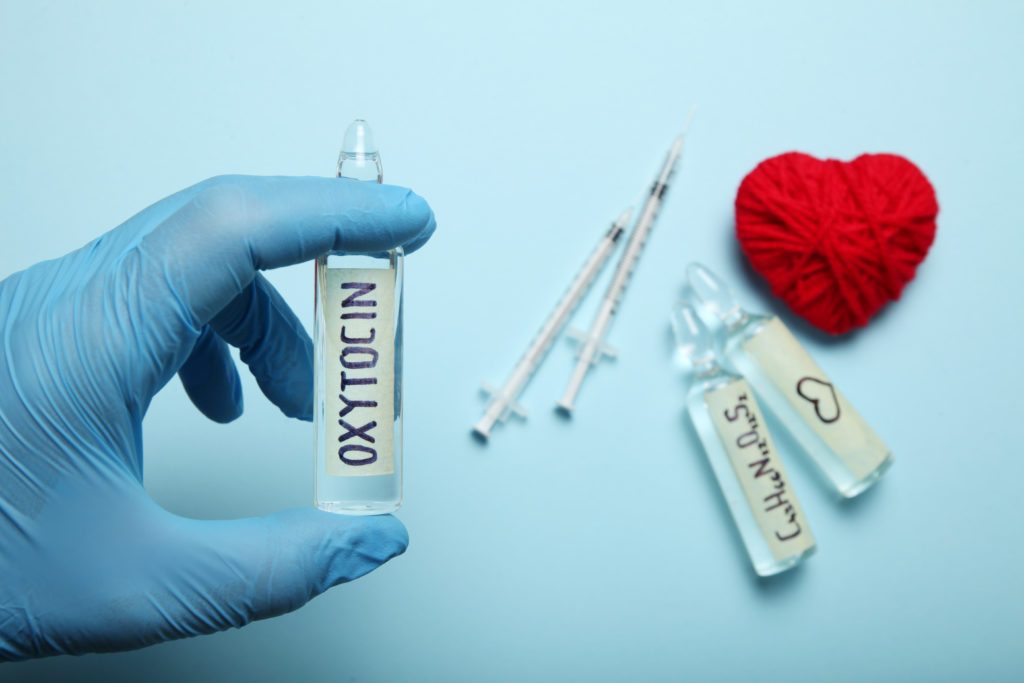 Oxytocin (not to be confused with OxyContin, the painkiller at the center of the opioid epidemic) has been called the “love chemical,” the “hug hormone,” the “elixir of trust,” and even the “moral molecule,” among other monikers. If one is to believe the popular perceptions surrounding this ubiquitous neuropeptide, which has become the darling of press and public alike, one might think it is the cure-all to everything from adulterous spouses and lonely singles to serious psychiatric disorders.

“There is a lot of hype out there,” says Dana Alliance member Martha Farah, Ph.D., a neuroethicist and director of the Center for Neuroscience & Society at the University of Pennsylvania, lamenting the snake-oil salesmanship rampant in a shady industry of sprays, balms, and elixirs claiming to harness the power of oxytocin to win friends, lovers, and clients. Still, Farah is quick to add: “Oxytocin research does deserve the attention it’s been getting, because it represents a beautiful example of how neuroscience can illuminate important aspects of psychology and even what one might call the ‘human experience.’”

Farah’s cautious enthusiasm about oxytocin is warranted. Research on oxytocin exploded in recent years, fueled by the promise of a spate of early studies suggesting a critical regulatory role in prosocial behaviors like trust, generosity, and altruism. A search on clinicaltrials.gov brings up more than 700 clinical trials investigating oxytocin as a potential treatment for a range of behavioral and psychiatric disorders–up from about 40 six years ago. The scientific literature on oxytocin numbers is in the tens of thousands, touching on virtually every aspect of human behavior.

The intense interest in oxytocin has been a double-edged sword. While science tries to sort out the nuances of what the hormone does and how, the popular press and the public have run wild with the concept of a feel-good hormone that could seemingly right society’s wrongs. Some even suggest that serious psychiatric disorders such as depression might be addressed merely by petting a dog, for example.

“There’s been a lot of ‘neurojunk’ around oxytocin,” says Dana Alliance member Patricia Churchland, Ph.D., a neurophilosopher and professor emeritus at the University of California-San Diego. “There has been this misperception that by increasing levels of oxytocin, you make people more pro-social, more altruistic, nicer, kinder, and so forth. The evidence for that is really shockingly thin.”

Like many popular myths, there are grains of truth behind the misconceptions around oxytocin. The problem is when the nuances of science are ignored and huge leaps are made from the “shockingly thin” layer of solid research to broad generalizations that even the deepest digs into the literature can’t support.

What is clear is that oxytocin plays important roles in reproduction, childbirth, and maternal bonding, roles that have been studied extensively since the 1960’s and 1970’s. (Oxytocin was discovered and synthesized in the early 1950’s, work that earned Vincent du Vigneaud, Ph.D., the 1955 Nobel Prize in Chemistry.) Oxytocin released by the mother during labor opens the birth canal to enable the baby’s head to pass through–a biological imperative that may have been crucial to the evolution of the large human brain, argues behavioral neuroendocrinologist Sue Carter, Ph.D., director of Indiana University’s Kinsey Institute and a leading expert on the physiology of oxytocin. Endogenous oxytocin is also released in both infant and mother during post-birth skin contact and suckling, which seems to play a critical role in mother-infant bonding and may have long-lasting effects on both parties.

In the 1990’s, Carter’s research added mate bonding to the list of oxytocin roles. She and others have studied prairie voles, a rodent species that is unusual because it pairs for life. Prairie voles, it turns out, have exceedingly high levels of endogenous oxytocin compared to other vole species that are promiscuous. Blocking oxytocin erases voles’ monogamous character trait.

These findings helped set off a wave of research aimed at explaining oxytocin’s role in mating behavior. It is likely what earned the neurochemical its nickname as the “love chemical” and set up oxytocin’s reputation as the keeper of marital fidelity, even though the findings in voles have never been extended to humans.

Public attention to oxytocin was fanned further around 2005, when a group of researchers led by Swiss neuroeconomist Ernst Fehr, Ph.D., published a paper in Nature showing that people who received a sniff of oxytocin nasal spray were more trusting. Specifically, they were willing to entrust significantly more money to strangers in a role-playing game. Thus came the “trust molecule” moniker. A new wave of research followed from all corners of the earth, and within a few years it seemed as if all manner of prosocial behaviors were being elicited by a puff of oxytocin from a nasal spray.

Not everyone was convinced. Some researchers were skeptical of the burgeoning results and called for caution. In 2010, a Belgian team led by Moira Mikolajczak, Ph.D., of the Catholic University of Louvain, published an eloquent, brief report that called into question the trust findings. The paper, titled “Oxytocin Makes People Trusting, Not Gullible,” found that context was key: when people were given clues suggesting a social partner was untrustworthy, oxytocin had no effect on their willingness to trust. The report was the first to demonstrate in humans that oxytocin’s effects were dependent upon the social context, findings in line with rodent research showing context mattered greatly to animal response after oxytocin administration.

“Oxytocin is not the magical ‘trust elixir’ described in the news, on the Internet, or even by some influential researchers,” Mikolajczak wrote, in a not-so-subtle allusion to the earlier trust findings.

Still, the hype surrounding oxytocin persisted. It may have reached a peak around 2012, coinciding with the publication of a book by one of Fehr’s co-authors on the trust paper, economist Paul Zak, Ph.D. Driven by a lavish marketing campaign complete with a media blitz, Ted Talk, and pop-psychology blog, The Moral Molecule quickly became a bestseller, further feeding the public’s fascination. Zak’s book was originally subtitled “The Source of Love and Prosperity.” A subsequent edition proclaimed it “The New Science of What Makes Us Good or Evil.” Oxytocin was firmly established in pop culture, elevated to near-mystical status with skillful marketing by a mediagenic personality.

How Much Oxytocin Is Just Right?

Hyperbole aside, as more researchers dove into oxytocin research, warning bells rang louder. Mikolajczak’s work underscored the increasingly obvious fact that oxytocin has widely varying effects depending on the social context and on individual differences that remain, to this day, poorly understood. That oxytocin has been shown both to promote trust and aggravate mistrust, to increase generosity and cooperation in some cases and to incite aggressive behavior in others, demonstrates how difficult it is to predict its effects.

Churchland calls it the “Goldilocks phenomenon.” With oxytocin, it seems, “too little is not so great, and too much is not so great; it has to be just right. The problem is, we don’t really know what ‘just right’ is,” she says.

It’s clear that a lot of different variables affect the “just right” amount. Context is certainly one piece of the puzzle. Untangling oxytocin’s role in human social behavior is further complicated because it interacts in complex, largely unknown ways with myriad other hormones and biochemicals that modulate neuronal behavior.

At the individual level, genetic differences may make one person’s response to a single dose of oxytocin very distinct from another’s. At least 20 different genetic variations of oxytocin receptors have been identified, and it’s not clear how these differ in distribution throughout the brain and elsewhere, nor how they vary in density or sensitivity from one person to the next. Moreover, oxytocin sometimes has opposite effects in men vs. women, depending on where in the brain researchers look and what behavior is investigated. In short, it’s complicated.

Recent work by Yunzhe Liu, Ph.D., and colleagues in Beijing and London also suggest a role for personality traits. Their research found that intranasally administered oxytocin increased prosocial behavior (measured by relative generosity in a wealth-sharing game) in people deemed by personality questionnaire to be more self-centered, but had no effect on inherently prosocial people. Oxytocin moved the needle on altruism only for selfish people.

In an archival review of oxytocin research published last year, China-based neuroinformatics researcher Keith Kendrick, Ph.D. and colleagues underscored the profound complexity of oxytocin’s effects on human behavior and how difficult it has been to sort out those effects in order to effectively apply them therapeutically. Psychiatric disorders in which social deficits are prominent–notably autism and schizophrenia–are prime targets, yet clinical trials to date have produced mixed results, in part because of the many unknowns.

“It’s really important to separate the hype from the science, because the real complexity that’s involved in all of the roles oxytocin seems to play has not been entirely researched yet,” says Churchland. “There is so much we don’t know.”

Even with so many unanswered questions, it’s clear that oxytocin is an important molecule–maybe even a critical linchpin–in the complicated neurobiology of social behaviors. What’s also clear is that it doesn’t act in a vacuum but interacts with many other hormones and peptides to exert its effects in the brain and body.

“Neurochemicals can’t do anything on their own,” Churchland says. “They depend on the right kind of neurons and the right kind of circuits to achieve certain kinds of effects. It’s not a story of oxytocin alone.”