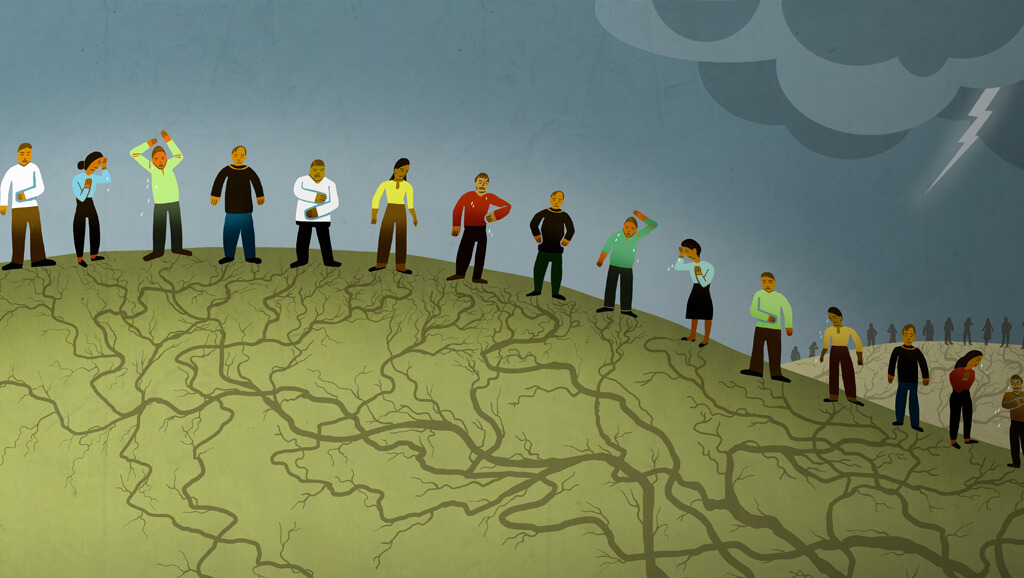 In record numbers, Americans are anxious, worried, sleep-deprived, distracted, and depressed. The Covid-19 pandemic’s triple whammy of an invisible and omnipresent threat (coronavirus infection), profound disruptions in daily life, and uncertainty for the future has thrust many people into a chronic, high-stress state that is, let’s just say, less than optimal for rational thinking or any other sort of higher-order cognitive functioning.

While the Covid-19 pandemic rages on worldwide, the immediate mental health impact of this collective trauma is coming into focus even as the outlook for long-term psychological effects remains considerably fuzzier.

Are we experiencing a pandemic of mental illness? Much has been reported about the ill-termed “mental health pandemic” that seems to be surging through the U.S. and other countries in lockstep with lockdowns and the death, societal disruption, and economic devastation of the viral pandemic. Many experts have sounded the alarm for an approaching tsunami of psychological maladies that could sink an already overburdened mental healthcare system.

A growing cache of data seems to bear out those fears. One of the most recent, a population survey conducted in April and May, found a three-fold increase in depression since the pandemic began. The researchers examined mental health problems relative to 13 pandemic-specific stressors, including loss of a job, death of someone close to you due to Covid-19, and financial problems (see box for full list). The more stressors people reported, the more likely they were to also report symptoms of anxiety and depression.

Other studies show similar rises. From April to June, the Census Bureau tracked anxiety and depression symptoms among Americans in weekly emergency surveys, finding a sharp rise in both. In a Kaiser Family Foundation Health Tracking Survey conducted in July, more than half of U.S. adults (53 percent) said worry and stress related to coronavirus has had a negative impact on their mental health, up from 39 percent in May. 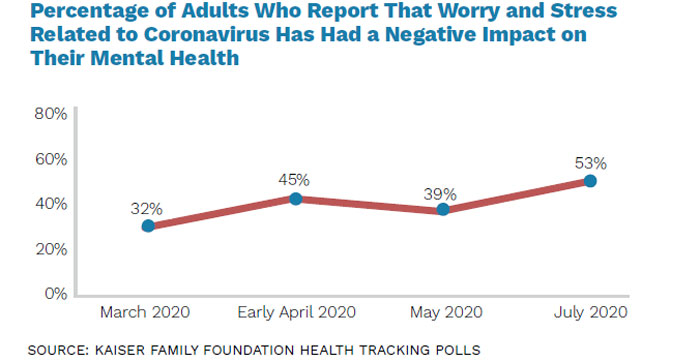 A key question is whether, and to what degree, pandemic-related symptoms of anxiety and depression will progress into serious mental illness and increased rates of suicide and addiction, or if all this angst and gloom is more accurately seen as a normal adaptive response to the amped-up stress that many people are experiencing during Covid.

The evolving field of disaster mental health requires that practitioners (clinicians and indigenous helpers) work with individuals and whole communities in the field rather than in an office. Among the lessons it has taught us is that large-scale traumatic events such as 9/11 or Hurricane Katrina trigger immediate and persistent psychological symptoms in large swaths of the affected population. It tells us that stressors generally have a cumulative effect both during and after disasters: the more life stressors people experience, the more likely they are to have persistent symptoms of depression and anxiety, and/or suffer consequences years later in the form of cardiovascular problems or other stress-related diseases. And it tells us that not everyone reacts the same to the same event, and that many factors—environmental, social, cultural, as well as an individual’s personality traits—interact to determine how each person responds.

Media exposure seems to play a critical role, with greater exposure to coverage of a disaster consistently linked to higher stress levels. In one study of the Boston Marathon bombing, people who watched the most news about the event also had the highest stress levels, higher even than people who directly experienced the traumatic event. This can create a “self-perpetuating cycle of distress,” the authors noted, with people seeking out more news as their anxiety increases.

Data from a population survey by Sondro Galea of Boston University and colleagues suggests that the impact of the Covid-19 pandemic on Americans may be substantially larger than that of previous large-scale events—a reflection, the authors speculated, of its ubiquity. “The reason is probably that this is not one event,” Catherine Ettman, the paper’s lead author, wrote in an email. “This is both Covid, and the fear and anxiety around Covid, as well as the dramatic economic consequences. Evidence for that comes, in particular, from the disproportionate burden of depression on people with fewer resources.”

A greater burden of deleterious effects is consistently seen in predictably vulnerable populations, such as those who have directly suffered financial loss, are at direct risk of harm, or have lost a loved one. Women, minorities, the elderly, and the poor have historically been hit the hardest by large-scale collective traumas. The Covid data so far echo and amplify these trends, with one interesting exception: younger adults are reporting more stress than older adults in the current crisis.

Clearly, the mere presence of stress-related psychological symptoms does not by itself signal mental illness. In its guidebook, Protecting Mental Health During Epidemics, the Pan American Health Organization (PAHO) notes that the majority of psychological and social problems that occur during an epidemic are “normal reactions to an abnormal situation” rather than diseases. Signs that differentiate a “normal” reaction from a potentially pathological one, PAHO says, are prolonged or intense suffering, the presence of associated complications such as suicidal behavior, and problems that significantly impact an individual’s routine and social functioning.

Only time—and research—will tell where the lines are drawn between “normal” and “pathological” mental health responses to a global pandemic. In September, six months into lockdown in the U.S., the National Institute of Mental Health started enrolling volunteers in a large-scale clinical trial to assess mental health outcomes over time, and to identify risk and resilience factors. Ten thousand participants, including healthy volunteers and people with a history of mood or anxiety disorders, will self-track their psychological symptoms online every two weeks for six months. The study will examine how Covid stressors relate to mental health symptoms and distress, and how pre-existing mental health concerns affect this relationship.

Moriah Thomason, Ph.D., a developmental neuroscientist at NYU Langone, is extending this inquiry into the next generation, asking what effect today’s stress will have on babies born in the midst of the pandemic. Her team has recruited 1,000 women in New York City to be part of a longitudinal study, the so-called Coronavirus Outbreak Psychological Outcomes study, examining the relationship between a mother’s Covid-related stress during pregnancy and the neurodevelopmental health of her children. Initial unpublished data from 679 new and expecting mothers finds that the vast majority—78 percent—reported an increase in stress during Covid; financial woes, personal health, and the impact of Covid-19 on their communities were the top three sources (see “COPE Study” graphic at end of this story).

The study’s first babies were born in late summer, and Thomason hopes to begin doing magnetic resonance imaging scans of the infants’ brains by the end of the year—pandemic permitting. Researchers will track brain development in the babies and how that relates to the mother’s stress levels and resilience-oriented behaviors during pregnancy. One of the things she is particularly interested in is the toll of stress related to the uncertainty surrounding Covid.

The late Bruce McEwen of Rockefeller University, an expert on the physiological consequences of stress, argued that what we call “stress” is really the brain’s effort to resolve uncertainty. The brain operates by making predictions about the world based on what it can ascertain through the senses. When it can’t resolve the uncertainty, it has to work harder to find a resolution. This makes uncertainty stress “bioenergetically expensive,” says Thomason. The brain is a greedy organ—it gobbles up 20 percent of the body’s overall metabolic energy and prioritizes its own needs at the expense of other organ systems. If the brain is “always on” to figure out an uncertainty, it is constantly pulling energetic resources from the body. Physically, this can result in fatigue, sleep disruptions, fluctuations in overall energy levels—the kinds of things that are hallmarks of chronic stress.

The brain is well equipped to deal with acute stress, having evolved to flee the tiger or fight the foe in order to survive. Under threat, the amygdala kicks off a well-characterized stress response, releasing cortisol and other powerful hormones that activate the autonomic nervous system.

Heart rate speeds up, breathing quickens, and blood flows to muscles and limbs. Organs unneeded for the immediate response, like the gastrointestinal tract, are put on hold. When the stressor has passed, the whole system relaxes, returning to its balanced baseline performance.

It’s when the stressor doesn’t pass that things can get ugly. Or when it keeps rearing its head, or is compounded by other stressors. Then the system can’t return to baseline. Stress hormones keep pouring out. The brain stays in a hypervigilant, energy-hogging, toxin-producing state.

That’s because repeated exposure to cortisol, the stress hormone, can be toxic to nerve cells. One of its effects is to cause changes in ion channels that regulate neuronal firing in the prefrontal cortex, the thinking part of the brain. The prefrontal cortex exerts inhibitory control over more evolutionarily primitive circuits like the amygdala and basal ganglia, which govern instincts, habits, and emotions. Animal research in Amy Arnsten’s laboratory at Yale has shown how synaptic connections in the prefrontal cortex first weaken and eventually wither away under conditions of chronic stress, unleashing the primitive, instinctual brain from its executive overseer.

“Without this top-down regulation by the prefrontal cortex, the amygdala and basal ganglia are free to act in these more primitive ways, so you become more irritable or impulsive, acting in a habitual rather than a thoughtful way,” she says. Arnsten recently released a YouTube video that describes this biological effect, with the hope of helping people understand the neural events behind their behaviors. Says Arnsten, “When you understand the neurobiology, it helps you be compassionate with yourself, instead of getting into a vicious cycle where you blame yourself for your cognitive and emotional errors.”

For more findings about effects of the COVID-19 pandemic on mental health, visit the KFF website.

This article first appeared in the Fall 2020 issue of our Cerebrum magazine. Click the cover for the full e-magazine.