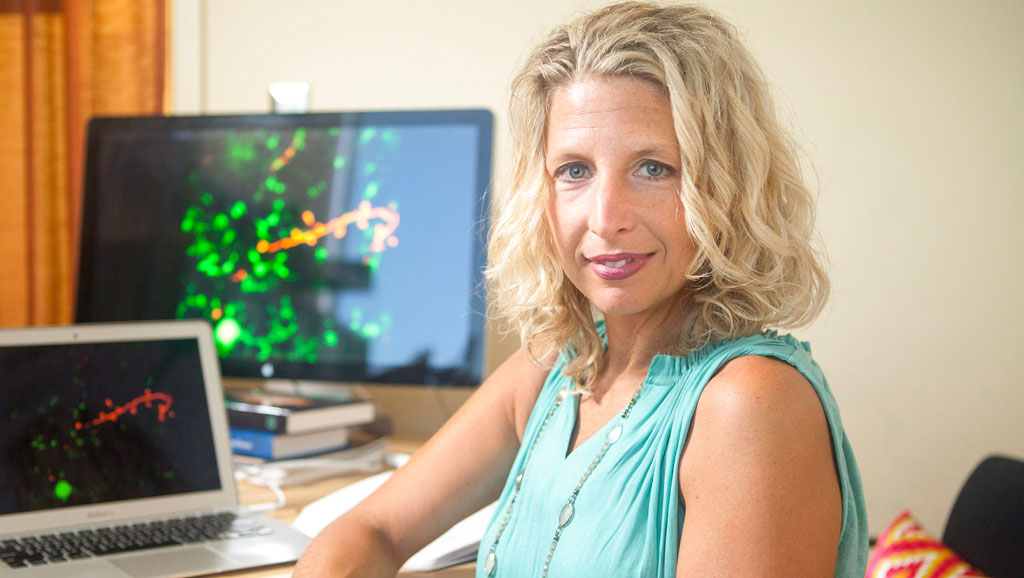 You have focused your research on understanding synaptic “pruning,” how the brain systematically eliminates less active synapses. This is one of the most fundamental tenets of brain development, yet very little is known about how it works. Why has this been such a difficult puzzle to solve?

Beth Stevens: In graduate school, I can remember Jeff Lichtman’s elegant imaging studies at the neuromuscular junction. Synapse elimination is critical for normal synapse development in the peripheral nervous system. Yet here we are 20 years later and so many questions remain regarding molecular mechanisms.

Trying to study this process in the brain has been a lot harder, for many reasons. One is that there are so many more synapses in the brain, and they are so tiny compared to those in the periphery, so it’s not easy to capture this in live imaging, as has been possible in the periphery. It’s been particularly challenging to understand the molecules and mechanisms that determine which synapses are preserved and which are pruned.

What led you to focus on this area of neuroscience?

Because synapse pruning is so important to normal brain development, understanding these mechanisms is a fundamental question. If pruning doesn’t happen correctly you can have a lot of long-term consequences in terms of brain wiring and behavioral problems. We think it may play a role in autism, schizophrenia, and other neurodevelopmental disorders.

It is also important in adult diseases, especially neurodegenerative disorders such as Alzheimer’s disease, where synapse loss is thought to be a hallmark. If we can better understand the pathways and molecules that normally drive synaptic pruning, that might give us some insight about how to manipulate and protect synapses in disease.

You have zeroed in on microglia, the resident immune cells in the brain, and so-called complement molecules, which tag unwanted matter in the body for removal by the immune system’s garbage clean-up cells (macrophages). Why?

We identified a role for complement molecules in synaptic pruning when I was a post-doc at Stanford with Ben Barres, where we showed for the first time that the same pathway that, in the immune system, helps clear pathogens or apoptotic (cell-death) debris from the body, acts in a similar way to clear synapses in normal brain development. In the immune system, complement proteins tag pathogens or apoptotic cells with a kind of “eat me” signal that the macrophages recognize and zero in on. In the healthy brain, microglia are the only cells that express receptors for complement proteins. That got us interested in microglia.

Around the same time, a number of pioneering imaging studies were asking what microglia are doing in a healthy brain. It was known that these cells were important in disease, but nothing was known about their role in health. My colleague Axel Nimmerjahn (now at the Salk Institute) was really the first to show that even in health, microglia are constantly surveying the environment of the brain with their fine processes and dynamically interacting with synapses. These two sets of findings led us to hypothesize that microglia are pruning or eating these extra synapses in the healthy brain.

What approach did you use to explore that hypothesis?

A post-doc in my lab, Dorothy Schafer, came up with a really cool way to study this in the visual system of mice in vivo. By labeling axons and synapses with one color of fluorescent dye and microglia with a different color, she found that microglia are indeed engulfing lots of synaptic inputs during normal development. That’s part of their job. 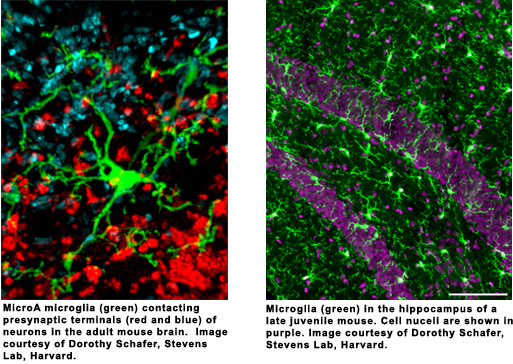 The second question was how do they do this? To test the idea that complements are involved, we used genetically engineered mice that no longer have receptors for complement proteins—they can’t recognize complement—and asked whether the microglia could still engulf synapses. She discovered that they don’t; when you get rid of the complement proteins on these cells, they are less efficient at pruning synapses. These findings were published in the journal Neuron in 2012 (Schafer et al. 2012).

Complement is one of the ways that they prune, but we know there are other molecules (i.e. fractalkine) yet to be discovered that also help microglia do this. We are actively exploring this with a series of projects in our lab aimed at determining what those other pathways are.

So we have an immune system process playing a key role in normal healthy brain development? How unusual is that?

BS: This is among many different examples of immune-related proteins expressed in the brain that have normal functions that we didn’t know about a decade ago. Carla Shatz was the first to discover that another group of immune molecules, MHC class 1, play a similar pruning role in the healthy brain. More and more of these immune-like molecules are being discovered that we as neurobiologists sort of ignored until rather recently.

The cool thing is that these immune molecules have multiple roles; in some cases they play different roles in the immune system vs. the brain. In the case of complement it’s actually a strikingly similar mechanism that is used slightly differently (i.e. clearing unwanted cells and synapses). It has opened up a whole new niche in neuroscience of neural-immune interactions. People are starting to rethink how the nervous system and the immune system are interacting and what role these interactions play in the normal brain. More and more researchers are getting involved in this area of science. We’re just at the very beginning in some ways, but it’s really starting to gain traction.

What have you discovered about other mechanisms that might be at play here?

BS: We’re starting to think about how this process is being regulated both positively and negatively during development and in disease models. The complement proteins—the “eat me” molecules—are positively driving pruning. But other molecules in the immune system are protective; they prevent macrophages from engulfing something. We wonder if there are similar protection molecules in the brain that prevent microglia from eating certain synapses or from eating too many synapses. We are now searching for those.

The other major question we’re focused on is how microglia are able to sense which synapses to go after. This seems to be regulated by neuronal activity. We reported in our Neuron paper that microglia preferentially engulf axons that are less active. This is consistent with what we know about synapse elimination being a competitive process—that the synapse that drives activity in the post-synaptic cell wins the competition at the expense of its less active neighbor—and it raises all sorts of interesting questions. How do microglia know that? How are they being regulated by activity? How are they sensing that one synapse is weak and one is strong?

Now that we have developed ways to study this in real time, we can really start to tease out what those molecules are that signal microglia to eliminate a certain synapse or protect another one, and to understand how microglia know that a given synapse or axon is more active than another one. This is where our research is going over the next several years.

You’re also looking at how these mechanisms might play a role in certain neurodevelopmental and neurodegenerative diseases. Where are you at with this research?

We are examining this now in a few different disease models, including Alzheimer’s disease, in collaboration with our colleagues who work on these disorders. So far the data are very intriguing and suggest that this may be a pathway that is re-activated early in these diseases to drive synapse loss.

We’re also looking at some neurodevelopmental disorders. We are actively testing the idea that microglia pruning processes might be disrupted in Rett syndrome, an autism spectrum disorder characterized by developmental and synaptic regression. Another big question that we’re pursuing is whether pruning and microglial cells are disrupted in autism and if so, which pathways and when.

You have published data in glaucoma. What did you find and how has that affected the direction of your research?

In collaboration with Simon John and Gareth Howell at Jackson Laboratories, we showed that this complement pathway is aberrantly upregulated early in a genetic mouse model of glaucoma, erroneously tagging retinal ganglion cells (the neurons that are vulnerable in glaucoma) for removal. We also found that if we block C1q, the first protein of the complement cascade, we can rescue the death of these cells and arrest the progression of the disease to some extent (Howell et al., JCI).

Glaucoma was the first example where this pruning hypothesis was tested in a disease model and shown to be relevant. This was a very exciting finding. Whether or not the same process mediates synapse loss remains to be seen, but this has been the foundation and motivation for us to move into other diseases and ask how global this phenomenon is.