A crucial new frontier in neuroscience is a better understanding of how proteins such as PrP, amyloid beta, tau, and others aggregate and spread, and kill brain cells. In this month’s Cerebrum article, “The Malignant Protein Puzzle,” two scientists who have collaborated for 30 years to identify the pathogenesis of Alzheimer’s disease and comprehend the role of abnormal proteins in neurodegeneration write about the latest advances in an area that has the potential to make a difference in helping people with dementia, Parkinson’s, CTE, ALS, and other neurodegenerative disorders.  One of the authors, Lary C. Walker, Ph.D., associate director of the Alzheimer’s Disease Research Center at Emory University, elaborates on their collaboration and some of the science in their article. 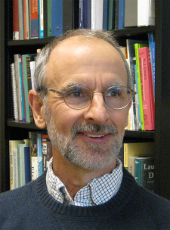 What inspired you and Mathias Jucker to work together?

I was at Johns Hopkins and Mathias was a fellow across town at the National Institute on Aging. We had a common interest in the aging brain and we met through seminars that took place in Baltimore. Through various discussions, we developed a strong common interest in the underpinnings of Alzheimer’s disease, one that has taken us to this day with our collaborations.

Does the fact that you now work in Atlanta and Dr. Jucker in Germany impact your collaboration?

It would have mattered 30 years ago, but it’s so much easier now to communicate. We converse mainly by email, and we speak on the phone regularly. It’s really not that different from having a colleague on the other side of campus.

Can you explain in simple terms what a prion is?

A prion is basically a form of a normally produced protein that misfolds. In other words, the protein (called the prion protein) folds into the wrong shape and, in that shape, has completely different properties than the normal protein. Prions are able to compel other prion protein molecules to misfold, which is the most important property for disease. They also become sticky in this state, which causes them to bind to one another. That’s why, with prion disease (and many other neurodegenerative diseases), you often see characteristic clumps of sticky, misfolded proteins in the brain.

What is the difference between plaques and tangles?

Plaques and tangles are made of different proteins; plaques are extracellular clumps of amyloid beta protein (Aβ), whereas the tangles consist of intracellular assemblies of the tau protein. In both cases the proteins are misfolded, in which state they aggregate into long polymers that, in large numbers, constitute the plaques and tangles that we see under the microscope.

You write that “the exact mechanisms by which nervous tissues are damaged in prion diseases remain incompletely understood—and that poses a challenge for future research.” Can you articulate this misunderstanding?

This is true for all diseases that involve protein aggregation. Protein aggregation is telling us that there is a disease process happening. But exactly which form of the aggregated protein is causing cells to die remains uncertain at this point. One of the things that has happened in the field in the last 15 years or so is the realization that these lesions – deposits of protein we can see with the light microscope – may just be a sign that the proteins are abnormal. The actual toxic forms may, in fact, be much smaller, perhaps as few as two or three molecules of amyloid beta or tau or prion protein bound together into tiny assemblies called oligomers. Those oligomers can bind to membranes or to transmitter receptors on neurons and disrupt the function of the cells. We think that oligomers may be an important toxic form, but there is evidence that different manifestations of aggregated proteins can, probably in different ways, interfere with brain function. As one example, the relatively big clumps of protein in plaques are linked to an inflammatory reaction in the surrounding brain tissue.

Why is it more likely that malignant proteins seem to misfold and aggregate and cause dementias more as people age?

That’s the $64,000 question. Aging is the major risk factor for virtually all of these diseases. We don’t know the reason for sure, but one possibility is that, as we age, the cellular mechanisms that control the production and the disposal of proteins become compromised. As a result, the cells are no longer able to get rid of abnormal proteins. Because of this, the odds go up that misfolded proteins will persist and then seed the continued aggregation of other protein molecules. Which disease develops may depend, to some extent, on which particular misfolded protein happens to gain a foothold in the brain first.

CTE (Chronic Traumatic Encephalopathy), one of the diseases linked to malignant proteins, has so far only been diagnosed in the brains of people who have died. Why is CTE so difficult to detect in the brains of the living?

The principal pathological feature of CTE is the accumulation of tau protein in neurofibrillary tangles.  In recent years, new imaging agents have been developed that are able to detect tau protein in the brain. These will be applied more and more to patients who are suspected of having CTE, allowing physicians to determine, with reasonable certainty, that bona fide CTE exists in the brain. Rapid strides are being made in the development of selective agents that can detect various aggregated proteins in living patients. Meanwhile, microscopic examination of brain tissue is still the definitive test for CTE.

Beyond CTE, specific imaging agents are helping us also to understand various aspects of Alzheimer’s disease. There are now several sensitive ligands that can detect Abeta protein levels in the central nervous system in order to facilitate the diagnosis of Alzheimer’s disease. In addition, tests that measure the levels of Abeta and tau in spinal fluid are helpful for diagnosis.  The ideal biomarker, though, would be one that doesn’t require radiation or a spinal tap; we are not there yet, but many talented researchers are seeking better ways to diagnose CTE, Alzheimer’s, and other neurodegenerative diseases.

TIME magazine recently featured “The Alzheimer’s Pill” on its cover in a series of articles on longevity. Essentially, it talks about LM11A-31, a drug developed by Dr. Frank Longo at Stanford and now in the human clinical trial phase. What do you think about its prospects?

I am skeptical of any claim that a pill will prevent or cure Alzheimer’s disease, and this is no exception. One of the problems with Alzheimer’s disease (and this is probably true of most chronic neurodegenerative diseases) is that it develops in the brain over a long, drawn out period. We now know that that the aggregation of proteins in the Alzheimer’s brain begins as much as 20 years or more before the patient shows up in the doctor’s office and says, ‘ I’m not remembering so well.’ Many in the field now recognize the need to stop this process very early on—long before signs of dementia first appear. And that’s going to require nipping the proteopathic cascade in the bud.  Although there are many promising drugs and drug leads, not one has come along yet that has been shown to actually slow or reverse this process.

Developing new drugs to destroy malignant proteins represents the next frontier for neuroscience. Besides the difficulty in conducting clinical trials because of such obstacles as long lead time and large control groups, why, from a research standpoint, has this proved so difficult?

Until we have a validated biomarker of disease progression, any trial that is going to show a significant, disease-modifying effect on Alzheimer’s disease must play out over a fairly long period of time. Such long-term trials are risky and expensive. It’s not like an infection, where we can give an antibiotic and then see a response within 24 hours.  If it’s true that we need to intervene early in order to prevent or delay the onset of Alzheimer’s, then we’re talking about a decade-long trial in some instances. So from a drug development standpoint, it’s still a challenge to determine whether a given intervention will actually change the course of the disease.

In this regard, there are clinical trials in progress where the idea is to study people with genetic mutations that will, without doubt, cause them to develop Alzheimer’s disease as they get older. The researchers know from the subjects’ family histories the approximate age when the signs of dementia will appear. By treating at-risk people in these families with potential therapeutic agents well before the onset of dementia, it is hoped that the onset of the disease will be delayed. We should know within the next few years whether early intervention is successful in these cases. I am hopeful.

You write that John Griffith once prophetically described how “a protein-only agent might multiply using the host’s genetic machinery to generate more protein.”

Many of our articles talk about genetics as our best chance to defeat various neurobiological disorders. A few months ago a group of scientists meeting in Washington called for a moratorium on making inheritable changes to the human genome. What are your thoughts on tinkering with the DNA of embryos to reduce the risk of mental disorders such as Alzheimer’s?

There is no question that the use of our knowledge of genetics to reduce human suffering is a worthwhile goal. CRISPR/Cas9 and related technologies have made the direct manipulation of genes much simpler. The problem is that we just don’t know enough about potential off-target effects of such gene manipulation to determine whether an intervention that prevents disease might inadvertently interfere with the function of other genes.  Then there’s also the possibility that this technology might be used just to change certain common traits in the offspring—make someone taller or give them blue eyes, for example. Who will decide how this technology will be used? It’s a proverbial slippery slope with significant implications for society.