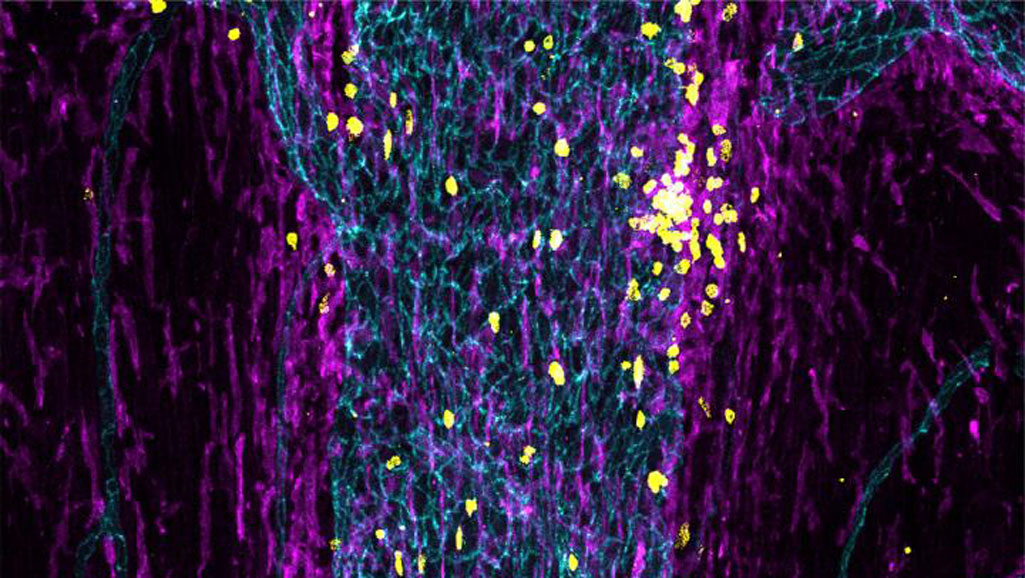 Immune cells (yellow and purple) fill a sinus (teal) in the outer layer of the meninges, the tissue that surrounds the brain and spinal cord. (Image courtesy of Justin Rustenhoven)

For decades, students of medicine, biology, and neuroscience were taught that the brain is an immune-privileged site. Behind anatomical barriers like the meninges, the three-layered membrane surrounding the brain, as well as the blood-brain barrier, a protective layer of epithelial cells, the brain  was thought to be hidden from the immune system to protect its delicate neurons and support cells from the damage that can be caused by inflammatory responses.

But now it appears that the immune system can covertly monitor the brain for antigens, the specialized proteins that help trigger an immune response, receiving signals passed via the dural sinuses, a group of blood channels at the back of the head, according to research from the Washington University School of Medicine in St. Louis. This discovery suggests the glymphatic system may not only perform necessary housekeeping duties in the brain but also provide the immune system with real-time information about the brain’s health (See also “The Brain’s Waste-Removal System”).

Inflammation in the brain can result in a variety of neurological and psychiatric conditions, from multiple sclerosis (MS) to depression. When the immune system identifies some kind of pathology, it will send in powerful immune cells and molecules, like T-cells and cytokines, to deal with the problem. Unfortunately, sometimes these immune players can critically damage neurons and brain circuits, leading to long-term neuropsychiatric issues.

Given the layers of protection surrounding the brain, scientists have long wondered how, if the brain is so immune-privileged, the immune system even knows there may be an issue that requires an immune response to begin with?

“Historically, we thought there was simply no interaction between the brain and the immune system—unless there was some kind of major pathology that moved out into the periphery,” said Jonathan Kipnis, the Alan A. and Edith L. Wolff Distinguished Professor of Pathology and Immunology at the Washington School of Medicine in St. Louis. “But the immune system keeps tabs on every other major organ in the body. The idea that the brain wasn’t being surveilled by the immune system, arguably the most important organ in the body, just never made sense to me. There had to be some way it was keeping track of what was going on there.”

In 2012, Maiken Nedergaard and colleagues at the University of Rochester, including Jeffrey Iliff, now at the University of Washington, first demonstrated that the brain uses cerebrospinal fluid (CSF) to clear itself of debris during sleep, flushing toxins and other waste products into the body’s lymphatic system. They termed this waste removal process the glymphatic system. They initially focused on how dysfunctions in this system might contribute to neurodegenerative diseases like Alzheimer’s disease, Iliff said. But as they learned more about glymphatic processes, they started to question whether they might provide some sort of interaction with the body’s immune system, as well.

“We know that the proper functioning of the system that moves of CSF both in and out of the brain tissue into paravascular spaces, the glymphatic biology, if you will, is important to overall brain health,” said Iliff. “But it provides an opportunity for different molecules, like antigens, to interact with the peripheral immune system through the meninges. It’s complex biology—but its dysfunction could have a role in many different neurological diseases.”

Justin Rustenhoven, a post-doctoral fellow in Kipnis’ lab, said it was clear that the immune system wasn’t getting into the brain itself but somehow monitoring its status from the periphery. He and Kipnis followed the CSF, looking for potential sites of immune interactions where the CSF, carrying debris and potential antigens, moves from the brain into the lymph nodes.

“We put fluorescent tracers into the CSF—and then do live imaging of the mice and just watch the CSF movement in real time. We looked at all the different routes it could go,” said Rustenhoven. “We noticed that CSF was accumulating in these dural sinuses. It was a place where we also saw these concentrated immune cells. They seemed like a place where the immune system could maybe sample the antigens and other brain-derived proteins coming from the brain.”

Through a series of experiments, Kipnis and Rustenhoven demonstrated that there was a direct physical connection between the brain and immune system in these sinuses, where the immune system could scan the molecules coming out of the brain with the CSF and mount an immune response when necessary. Their results were published in the January 27, 2021, issue of Cell.

“The dural sinuses are remarkably interesting. The vessels are densely populated by macrophages and dendritic cells and are fenestrated [have multiple openings], so macrophages that sit there can sample the contents of the blood and also of the CSF that comes out of the brain along the parasagittal dura,” Kipnis said. “So, you have this place where the macrophages can sense both the central nervous system and the periphery and call up an immune response if it is needed.

“When you want the best view, you climb the mountain. If you want to defend your area, you’d rather be at the top of the hill. It’s the same with the sinuses—it’s highest point of the body from where immune cells have the best ‘view’ on what is happening in the periphery and in the brain so they can defend the brain if needed.”

Putting the pieces together

Iliff said one of the most interesting things about Kipnis and Rustenhoven’s findings is the anatomical specificity of the immune monitoring system.

“It suggests there is this evolved specialized anatomic ‘handshake’ that may exist between the patterns of CSF clearance out of the brain tissue and these unique sinus structures,” he said. “It’s all set up in a way so this immune sampling can happen. It gives us a lot of interesting things to think about.”

Kipnis said the next step, for his lab, is to better understand what kind of signaling is happening during this handshake, and how that might lead to helpful and unhelpful immune responses. Kipnis and Rustenhoven have already shown, in mice engineered to have a version of MS, that their immune system activates a massive number of immune cells in response to sampling the myelin-related proteins which are thought to initiate this disease.

“There must be some specific signal which tells the immune cells that something is wrong, and they need to attack—and it looks like that signal happens in the dural sinuses,” said Kipnis. “Understanding the nature of that signaling could help us figure out a way to stop all those immune cells coming in and becoming pathogenic. It could help us find new ways to prevent or treat not only MS but also other neuroinflammatory diseases.”