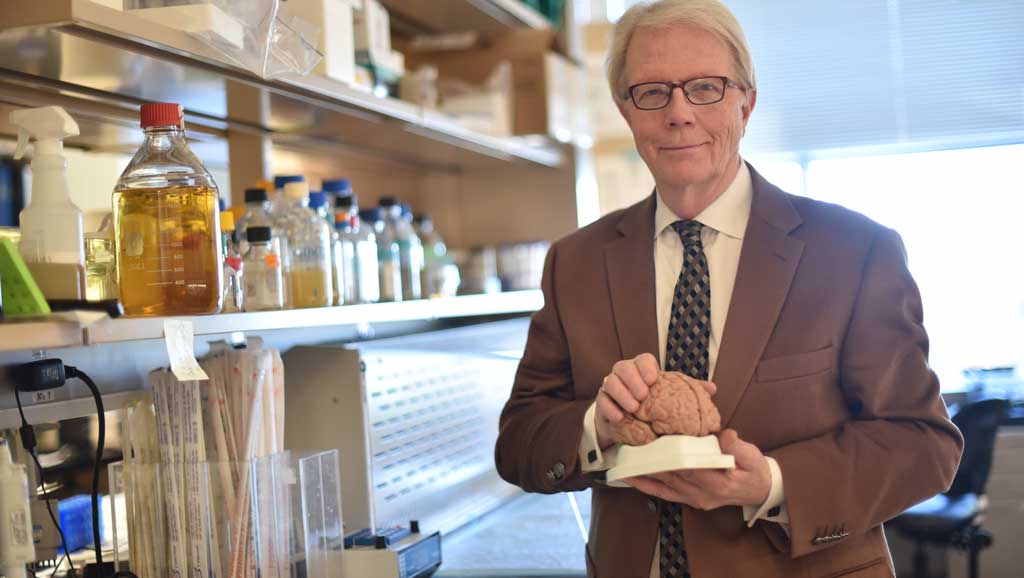 "Alzheimer’s disease has turned out to be much more complex than we thought when we started the molecular and biochemical study of the disorder about 20 years ago," says Huntington Potter, Ph.D.  Photo courtesy of University of Colorado School of Medicine

At first glance, there may not seem like there is much overlap between Down Syndrome and Alzheimer’s disease. The first, also known as Trisomy 21, is a chromosomal abnormality present at birth, resulting in impairments to both mental and physical health. The other is a neurodegenerative disorder mainly affecting the elderly, characterized by the build-up of a protein called amyloid-beta. Yet, nearly 20 years ago, Huntington Potter, Ph.D., a molecular biologist at the University of Colorado Denver’s Anschutz Medical Campus, demonstrated that people diagnosed with Alzheimer’s disease develop a small percentage of cells that have three copies of chromosome 21—the biological trademark of Down Syndrome. In the years since, Potter has made a name for himself finding uncommon connections between seemingly unrelated brain disorders. Now, he and his colleagues have found a promising potential treatment for Alzheimer’s disease by looking at disease mechanisms of rheumatoid arthritis.

What are some of the biggest challenges in trying to find appropriate treatments for Alzheimer’s disease?

Alzheimer’s disease has turned out to be much more complex than we thought when we started the molecular and biochemical study of the disorder about 20 years ago. Only a few drugs in clinical trials have shown even a hint of benefit. Some newer drugs are promising—but they are likely to take many more years to fully develop. The hope is that Alzheimer’s disease will be understood well enough to develop several different approaches to therapy. Some may work for people at the later stage of the disease, some at the earlier stage. We actually need many different potential drugs for Alzheimer’s disease to really have a hope of reversing this catastrophe.

Your recent work has found that GM-CSF may be a therapeutic contender. Why do you think this protein would be effective in treating Alzheimer’s disease?

Individuals with rheumatoid arthritis (RA) tend not to get Alzheimer’s disease. My student, Timothy Boyd, and myself were interested in why that might be. The idea at the time was perhaps people with RA take a lot of painkillers and anti-inflammatory drugs that may be inadvertently helping them avoid Alzheimer’s. That made sense but a big clinical trial to test that hypothesis totally failed. I wondered if there might be a natural protein made in people with RA that was protective. We spent a good deal of time trying to find out what that was.

To make a long story short, we’re pretty sure we found that protein. It’s called Granulocyte Macrophage Colony Stimulating Factor, or GM-CSF for short. It’s made at higher levels in people with RA. It’s secreted into the blood and it can get into the brain. And what it does is teach the brain to make more microglial cells and the bone marrow to make more macrophages. These cells are like little Pac-Men—running around the body, eating up things that aren’t supposed to be there. Including the amyloid deposits you see in Alzheimer’s. We tested the protein by injecting it into a mouse model of Alzheimer’s. It not only reversed the cognitive deficits but also got rid of about half the amyloid in just a few weeks. It was the fastest that anyone had seen benefits for a treatment for Alzheimer’s disease in the mice.

We’ve now doing a small, preliminary trial with human participants using Leukine, already approved by the Food and Drug Administration (FDA). Leukine is a form of recombinant human GM‑CSF. It’s used now to stimulate bone marrow in patients with leukemia who had high dose chemotherapy and then a bone marrow transplant. And one interesting side effect is that, when you give patients who are undergoing chemotherapy Leukine, their cognition improves. We found that this drug appears to be both safe and promising as a treatment for Alzheimer’s disease in human trial participants. The results after just three weeks of treatment are very encouraging—so much so that we were awarded a grant to fund a longer 24-week trial.

Many in the Alzheimer’s field have said, once the amyloid is there, the cognitive damage is done. What do you say to that?

I would say that we have to rethink that assumption. It may be that Leukine is able to do more than just get rid of amyloid. Data in animals suggest that it helps to keep nerve cells from dying, that it even helps nerve cells and blood vessels regrow. It may have the potential to teach the brain how to repair itself after it helps get rid of the amyloid.

You received a relatively small grant to fund this preliminary clinical trial. What, in your opinion, is the value of smaller grants to promoting new discoveries and advances?

The take-home lesson is that, if you give out many small grants, the chances are high that you’ll hit a home run on one of them. If you put all of your eggs in one basket, you are more likely to fail. We’ve had a lot of failures in Alzheimer’s disease—and perhaps that’s because many people were looking at similar approaches to treatment. The Dana grant really primed the pump, helping us to get the support we needed to get our trial off the ground. We couldn’t have succeeded without the Dana Foundation support.

We are currently working on the 24-week trial to determine if the apparent benefits of GM-CSF continue. Also, we aren’t sure yet how long the results of treatment will last and would like to investigate that. Unfortunately, Leukine is very hard to make and it’s very expensive. It is FDA-approved already, but it would probably cost about $75,000 a year to be treated with this drug. So we are trying to develop small molecules that will be easy and cheap to synthesize that can do the same thing as Leukine.

So many science headlines suggest that a “cure” for Alzheimer’s is on the horizon. As a scientist, how do you balance optimism with reality?

We need to be careful not to oversell a discovery before it’s complete. This study of GM-CSF is very preliminary. Those preliminary results look very promising. But we aren’t going to tell anyone it’s a cure because it’s not. It’s a step in the right direction.

It’s also important for people to understand that investigating a treatment takes time. It will be several years before the FDA can even be in the position of considering changing the approval of Leukine to include Alzheimer’s disease. We have a lot of work to do. We’ll have to have a lot more funding, and a lot more participants in clinical trials, before that will happen. But without this initial finding that looks so positive, we wouldn’t be able to get the resources required to carry out those further trials.

More labs are now looking beyond amyloid to help develop successful treatments for Alzheimer’s disease. What do you hope these lines of research will lead to?