Back to Parent Page
HomeArticlesRobots for ASD Therapy? Maybe as Partners 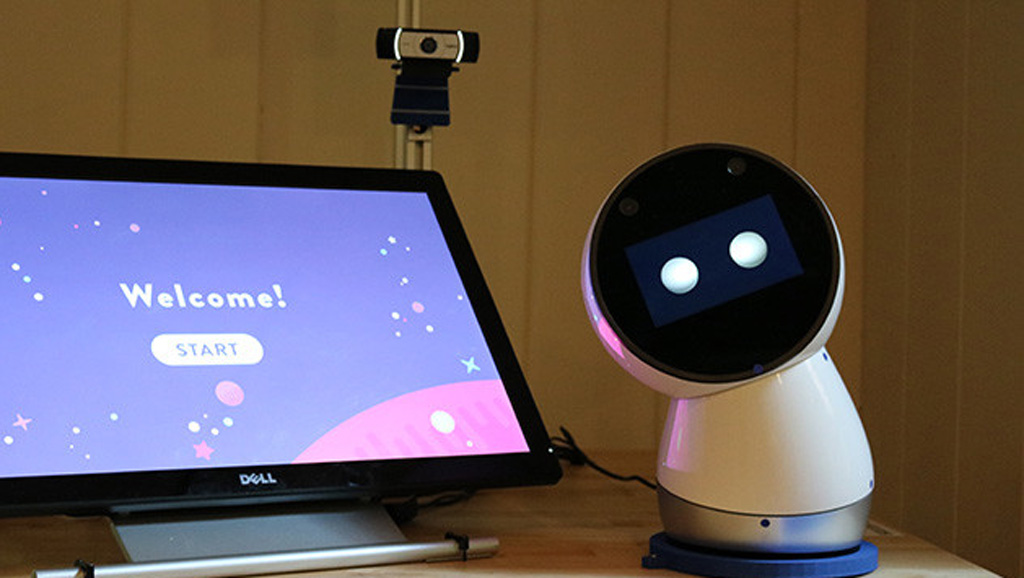 A robot that models eye contact and other social behaviors helps guide children and their caregivers through storytelling and games designed to promote skills such as emotional understanding, taking turns, and seeing things from others’ perspectives. Photo courtesy of Steven Geringer/Yale [See also 2 videos, below story]

Your next therapist may have a heart of silicon. There are apps on your smartphone to help you change your thoughts and behavior; voices guided by artificial intelligence (AI) to analyze your dreams. In California, a digital system that enables the troubled to connect via text with supportive peers and to live-chat with qualified professionals has more users than the real-world mental health system. (See “Wrestling With Our Digital World”)

Machine meets mind for therapeutic purposes dramatically in the use of robots—the intelligent device in its most embodied form. And nowhere, perhaps, are the possibilities more intriguing than in the treatment of autism spectrum disorder (ASD).

In some ways the world of autism is made for machines to conquer. “Many kids with ASD have an affinity with robots; in some cases, they prefer interacting with them than with humans,” says Brian Scassellati, professor of robotics at Yale. “We’ve seen a lot of potential for robots to play a role in treatment.”

Momotaz Begum, of University of New Hampshire, would agree. “Many studies show that some children with ASD have more interest in robots than in teachers,” she says. “They take guidance and are more open to listening to them. They pay more attention and communicate better than with human therapists.”

It’s unclear why machines are so acceptable to these kids. The core difficulties of autism involve social interaction—interpreting and responding appropriately to others’ gestures and expressions, observing the give-and-take of conversation, using language for effective communication. In such interactions, some hypothesize, robots are more predictable, less threatening, and easier to “read” than people. But experimental proof is elusive, Scassellati points out. “My best answer of the moment is that they’re social enough to trigger social responses—when they look at you, you look back—but not too social, so you don’t get nervous about making a mistake. You don’t get social anxiety.”

There may well be a neurobiological explanation, although studies thus far have been scarce, says Begum, who recently authored a review paper on autism-robot research. One reason, she suggests, is that the field has until recently been more the domain of those who study machines and computers than the mind and brain. “I assume there will be more [neurobiological] research in future years,” she says.

More generally, the evolution of therapy-robot studies dramatizes the necessity, difficulty, and promise of interdisciplinary research, Scassellati says—a partnership whose importance can only increase as technology-inflected therapy grows in prominence.

“I’ve been doing this work since 2000. When I started, we were engineers, doing the kind of testing engineers do: bring a robot into the clinic or classroom and have it interact with one child. No clear diagnostic criteria, no control group. Now we see people doing reasonably- sized randomized controlled trails, and getting solid statistical evidence that these systems are having a real impact.”

To psychologist Joshua John Diehl, of University of Notre Dame, whose 2012 review paper concluded that the field had a long way to go, “what I’ve been excited about since the review came out is a lot of studies that involve a collaboration between clinical experts and roboticists. The clinical questions being asked are at a much higher level, and the clinical analysis is much more fine-grained.”

For the most part, robots have been employed to help teach kids social skills like eye contact and taking turns in conversation, and to improve their ability to read the emotions of others. One frequent area of improvement is in sustained engagement with the task at hand— critical in any therapy, but doubly challenging here. Children with ASD typically find it hard to stay focused, and most effective therapies involve exhaustingly repetitive behavioral conditioning.

The point, researchers say, is not to improve interactions with robots, but with other human beings. To this end, “the most promising findings are not with the robot as therapist, but as co-therapist,” says Diehl.

The most scientifically rigorous studies, he says, have integrated robots into treatments already shown to be effective in ASD. In one such trial, reported at the May 2018 meeting of the International Society for Autism Research, parents administered an established behavioral treatment, pivotal response therapy (PRT), to their kids in 20 weekly sessions. Half the parents were trained to use a small robot, “Nao,” about 2 feet tall and capable of diverse humanlike movements and gestures, to enhance the sessions. By the end of the experiment, ASD symptoms in the children who received robot-assisted therapy had improved significantly more than in those who had PRT alone.

A robotic area where improvement is clearly needed is autonomy, says Scassellati. Even now, the device is in part operated by someone “behind the curtain, pulling the strings” —the so-called Wizard of Oz effect. To be practical, they would need to function without continual expert assistance, preferably at home, where behavioral techniques are usually practiced.

Scassellati led a pilot study (without a control group) in which children participated in a month of 30-minute daily sessions at home, involving a parent or grandparent and a table-top robot programmed to simulate gestures of attention and response, via movements of a simplified head and eyes (see photo and video, below). The idea was to engage the child in games designed to encourage interaction with the caregiver. The robots were programmed to adjust themselves to keep pace with the child’s changing skills, without the intervention of a researcher.

Over the course of the experiment, caregivers reported improved social behaviors like eye contact and communication. Clinical measures also documented gains “indicating… greater skill in the context of human interactions,” the researchers reported in an August issue of Science Robotics.

Another recent study, also in Science Robotics, suggested a deeper kind of autonomy. One of the challenges on the robotic side is developing a perceptual system that can recognize detailed, nuanced social cues,” Scassellati says.

To this end, a team of MIT researchers used machine learning, an AI algorithm, to “personalize” the robot’s reading of a child’s emotional state.

Machine learning applies advanced computation to find patterns in heaps of data. The study’s “deep learning” refinement progressively analyzed levels of data: a psychological assessment of the child and parameters like ethnicity and gender provided background to a record of his or her movements, facial expressions, words, and physiological changes (such as heart rate) while playing with a Nao robot. The analysis derived patterns that corresponded to each child’s level of social engagement, arousal, and pleasure or displeasure, as assessed by a panel of five experts. (see second video, below)

Observing these patterns in another session, the program’s judgment of the child’s emotional state agreed with expert consensus 60 percent of the time—better than the experts’ agreement with one another.

This individualized method could make it possible to program a robot to assess and adjust itself to a child’s affective state during a session, says Ognjen (Oggi) Rudovic, first author of the study. “Schools and therapists could also use the information to see how therapy is progressing,” he says.

Robots might advance autism treatment in other ways. Older children and adolescents tend to be more interested in how robots work than in conversing with them; the devices can provide an opportunity to learn coding, and a shared interest to promote social interaction with typically developing peers, says Diehl.

While roboticists seem highly optimistic about robotic therapy, most clinical researchers tend to be guarded, stressing the need for a stronger evidence base.

“I can imagine many ways technology can engage kids to learn,” says Connie Kasari, professor of psychiatry at UCLA. The key, she says, is exploring their promise and benefits while being mindful of their limitations.

“I think robots can be very motivating to kids, and might elicit attention and get them to respond, and that’s great. But engagement for social emotional development is a much more complicated area,” she says.

“Robots are not human; they don’t pick up on the subtleties of interaction, and probably never can. And autism is very complicated.”

That said, robots needn’t stand on the sidelines until their clinical utility is proven, says Diehl. “My personal philosophy is that there’s a space for clinical creativity different from our expectations for scientific rigor. When it comes to claims in research, there’s a long way to go. But if they are using an empirically supported treatment already, I would encourage clinicians to think of ways to involve this technology to improve motivation and outcome.

“I wouldn’t be averse to any sort of creative application of robots in treatment,” he says.

Video 1: An example of a therapy session augmented with humanoid robot NAO [SoftBank Robotics], which was used in the EngageME project. Tracking of limbs performed using the CMU Perceptual Lab’s OpenPose utility. Posted to YouTube by Ognjen Oggi Rudovic

Video 2: A study led by Yale’s Brian Scassellati found significant improvements in the social skills of children with Autism Spectrum Disorder after a month of working with a social robot. Placed in the homes of 12 families, the robot modeled positive social skills and engaged the children and their caregivers in storytelling and other activities. Posted to YouTube by Yale