Back to Parent Page
HomeArticlesSantiago Ramón y Cajal: The Artist as Scientist 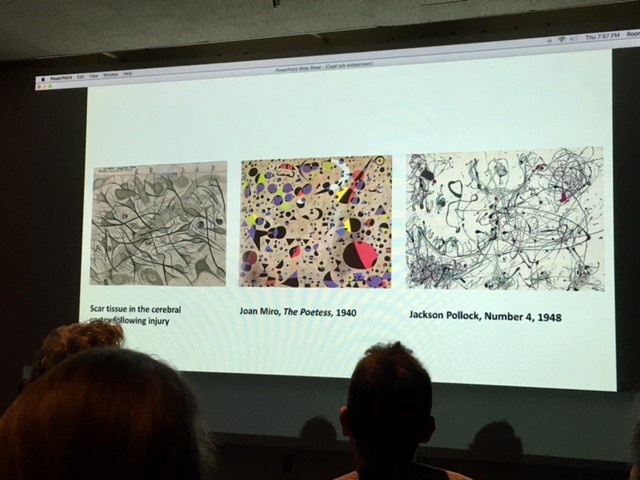 Santiago Ramón y Cajal is “the most famous scientist about whom very little is known,” said Eric Himmel, the speaker at Thursday night’s talk about the man whose prolific drawings helped revolutionize the field of neuroscience. But by the end of the evening’s event, the audience walked away with a much better understanding of how an aspiring artist, steered into medicine by his doctor father, found a way to merge his two passions.

Himmel, a publisher who worked on last year’s book, The Beautiful Brain: The Drawings of Santiago Ramon y Cajal, and collaborated on the accompanying travelling art exhibit of the same name, was privy to more than 4,000 images from Cajal—drawings and photos—and the selection he chose to accompany his talk really brought the story to life.

Cajal, born in 1852 in Aragon, Spain, was already practicing watercolors at a level way beyond my high school renderings by the time he was ten. Sent to the provincial capital, Huesca, at age 12 to attend school, he further explored his artistic interests, taking art classes and learning about photography from a friend.

Cajal earned the admiration of his art teacher, who pleaded with Cajal’s father to let him pursue art, but his father, an anatomy teacher, couldn’t be persuaded. Yet his father must have recognized his son’s artistic talents, Himmel noted, because the two collaborated soon after on a book that documented anatomical studies, with Cajal providing the illustrations.

In 1887, everything changed when Cajal viewed slices of the brain through a microscope treated with a stain developed by Camillo Golgi, which showed neurons sharply etched in black. Seeing this new level of detail, and Golgi’s renderings, opened Cajal’s eyes to the brain, said Himmel.

Using the Golgi stain and one he developed himself, Cajal made some of the first fundamental discoveries in neuroscience, such as the “neuron doctrine,” which acknowledges that the nervous system is made up of neurons that communicate with each other, said Himmel. In 1906, Cajal and Golgi were jointly awarded the Nobel Prize in Physiology or Medicine “in recognition of their work on the structure of the nervous system.”

And though we now celebrate Cajal’s work as art, Himmel said that Cajal himself didn’t necessarily view his anatomical illustrations as such. His drawings were created for academic journals and, after his death, were stored in a closet for decades. But what caught Himmel’s eye as he looked through the drawings was the number of illustrations that resembled works of modern art.

In fact, a fascinating moment in the lecture was the link Himmel drew between Cajal, poet Federico García Lorca, surrealist Salvador Dalí, and filmmaker Luis Luis Buñuel, who overlapped at the Residencia de Estudiantes (Cajal as a teacher), a renowned cultural institution in Spain. Himmel said surrealism, which “swept through the 20th century with tremendous force and influence,” was enriched by exposure to Cajal.

So, as we enter the final week of the fabulous Beautiful Brain exhibit at NYU’s Grey Art Gallery, I urge those of you in New York City to visit. There is even a free opportunity to try your hand at drawing in the style of Cajal tomorrow, from 12:30 pm to 1:30 pm.

For those outside of New York, the art exhibit is travelling, with the following stops scheduled: