Back to Parent Page
HomeArticlesSeeking the Earliest Traces of Autism 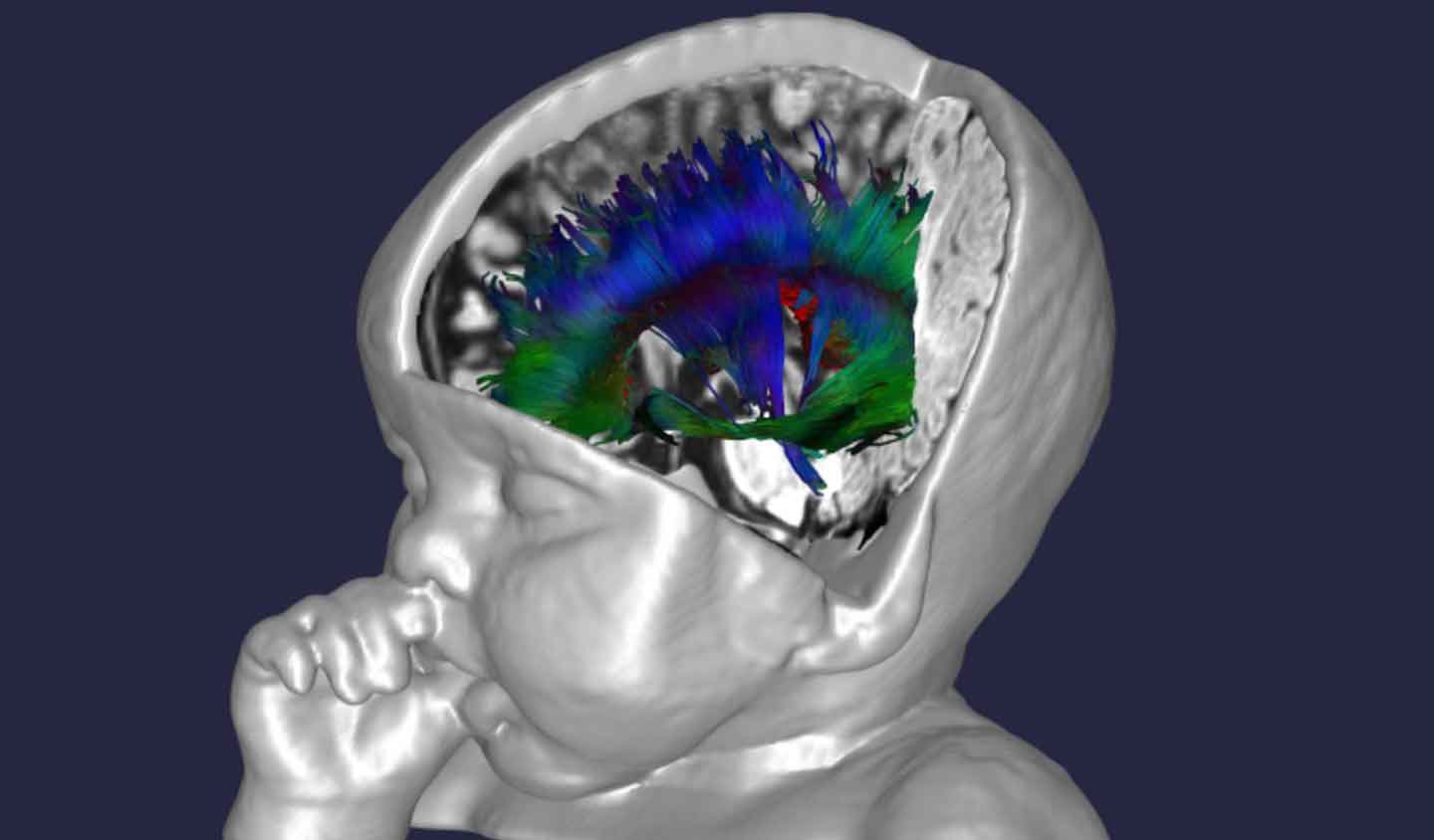 This artwork shows a few of the connections in the brain of one typically developing 6-month-old who participated in the Montreal Institute study. The researchers traced connections between all brain regions and combined the lengths and strengths of the connections to determine the network efficiency of each region. Photo courtesy of Ludmer Centre

For parents of a child diagnosed with autism, one major worry is whether their younger siblings will also go on to develop the condition. It is a concern: Researchers have identified hundreds of rare genetic mutations associated with the condition, and we know that it runs in families and that having an older brother or sister with autism increases the risk that a younger child will also develop it.

“Symptoms such as delays in language and a failure to follow adults’ gaze or pointing usually become clear in the third year of life,” says Emily Jones, a research fellow at the Centre for Brain and Cognitive Development at Birkbeck, University of London, whose research focuses on early neural and cognitive development in autistic infants. “Some children are diagnosed at around 2 years of age, but for some it’s not until 4 or 5 years, because they seem to be able to compensate for longer.”

The ability to accurately diagnose autism before symptoms emerge could help teachers get children the help they need so they don’t fall so far behind so fast. But it is still not possible to predict which at-risk infants will subsequently develop autism themselves.

Recent advances in neuroimaging technology have made it far easier for researchers to scan infants’ brains. Several large, ongoing collaborative studies are now using these techniques to compare the brains of autistic children with those of their younger siblings. Although these studies have not led to diagnostic tests, they are improving our understanding by revealing the developmental processes and early brain changes that could underlie its symptoms.

In February 2017, for example, researchers involved in the National Institutes of Health (NIH)-funded Infant Brain Imaging Study (IBIS) published neuroimaging data from 146 infants, 106 of whom were deemed to be at risk of developing autism because they had an older sibling diagnosed with the condition. The researchers showed that the brains of the at-risk infants grew faster between 12-24 months of age than the other, low-risk ones. The scientists used a “deep learning” algorithm to correctly predict 30 out of the 37 that were subsequently diagnosed with autism. (The algorithm also gave some false-positives, incorrectly identifying four infants who were not later diagnosed with autism.)

Several months later, the same research team published another study showing that deep learning algorithms can also identify patterns of functional connectivity in infants’ brains, and these patterns could predict, with greater than 96 percent accuracy, which of the 59 six-month-old infants in their sample would be diagnosed with autism by 24 months of age.

John Lewis and his colleagues at the Montreal Neurological Institute and Hospital in Quebec have also been using functional neuroimaging to examine and compare functional connectivity in the brains of autistic children and their at-risk siblings. In 2014, they published a neuroimaging study of 136 one-year-old infants, 113 of whom were at high risk of developing autism.

The researchers used diffusion tensor imaging (DTI) to examine the length and strength of connections in their young participants’ brains, and found that those at high risk of developing autism had significantly reduced neural network efficiency, compared with the low risk infants.

These differences were widespread throughout the brain, at both the local and global levels, and included regions of the temporal, parietal, and occipital lobes, which are known to be involved in language, sensory processing, and social stimuli. Importantly, the extent of the differences seemed to be closely related to the severity of autism symptoms: Children with the least efficient networks exhibiting more severe symptoms later on.

To determine when these structural abnormalities first appear, Lewis and his colleagues performed a slightly larger follow-up study, examining brain imaging data from 260 infants, some of whom were at high risk of developing autism. This time, the researchers looked at brain scans obtained at 6 months and 12 months old; they also had data from both time points for 116 of the study participants, enabling them to track the emergence of network inefficiency during the first year of life.

From scanner to pediatrician?

“The fact that these relationships are seen so early suggests that early diagnosis may be possible,” says Lewis, “but the more important aspect of the findings is that the inefficiencies are seen in early sensory processing areas, and not in areas generally associated with higher level processes.”

“I think this brings us closer to understanding what might mechanistically be abnormal in autism spectrum disorders,” he adds. “It also suggests that abnormalities seen later in development must be interpreted as potential ‘cascade’ effects of these initial abnormalities in sensory processing [and] also points to possible interventions to explore.”

This latest study involved “a very large sample and [produced] a unique data set”, says Jones. “One of the interesting things [they found] is that these early changes occur in sensory [parts of the brain], such as the auditory cortex, suggesting we could use auditory tests or electroencephalography (EEG) to detect them. It’s also consistent with the idea of early sensory atypicalities that affect social development.”

Jones adds that there are other barriers to using brain scanning as a diagnostic tool. “It’s expensive, and it’s very hard to get babies to sleep [in the scanner],” she says. “The idea of using it in a primary care setting would be challenging.” Furthermore, all of these studies rely on comparing at-risk infants with low-risk ones. “It’s not easy to predict on an individual level — combining [brain scans with other measures] is likely to be more fruitful.”

But these and other studies are useful because they can begin to give us a clearer picture of the brain mechanisms underlying autism. “That’s where the real value of these studies is,” says Jones. “They’ll help us to understand what’s changing in the infants’ brains and when, and how [these changes] relate to later symptoms.”