Back to Parent Page
HomeArticlesSound Health: Shaping Our Children’s Lives Through Music Engagement 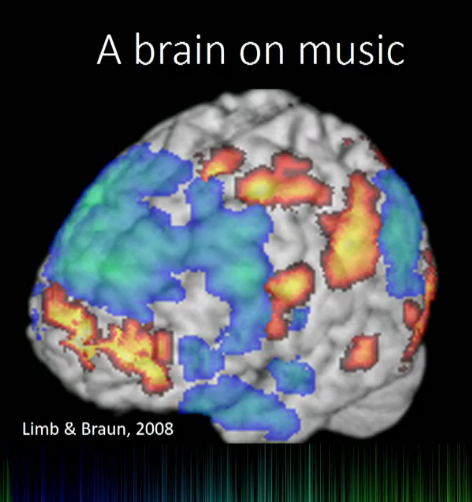 For the second year, the National Institutes of Health (NIH) and the John F. Kennedy Center for the Performing Arts spent a weekend exploring the connections between music, the brain, and humanity. A piece of their ongoing “Sound Health” partnership, the events at the Center this past weekend focused on how important the arts are to children’s development, both experiencing art and practicing and producing it. (See also our report and KC videos from last year’s event.)

The idea partnership came up in conversations between NIH director Francis Collins and renowned soprano and Kennedy Center artistic advisor Renée Fleming, and they led the chorus of brain experts and musical prodigies starting with a conversation and concert on Friday. Collins also announced a new program that will soon offer $5 million in research grants to study the effects of the arts on the brain, in partnership with the National Endowment for the Arts.

All the Saturday events are available as webcasts—including a drumming circle led by Grateful Dead percussionist Mickey Hart! They are all worth a watch or two, with engaging scientists talking interspersed with great musicians performing. Together they add up to more than seven hours, so take your time. Many have small sections where the audience can participate; if you really want to get your rhythm on, jump down to the Interactive Drum Circle recording and have at it for a good 60 minutes.

Say It With Rhythm!

“There is a tremendously tight association between our auditory system and how we move in the world,” says neuroscientist Nina Kraus. Grateful Dead percussionist Mickey Hart and tabla master Zakir Hussein help her illustrate her points with sound; they also share stories of how they started playing music as children and what it means to them.

Rhythms that are pulse-based differ from those that are pattern-based, and are processed differently in the brain, Kraus says. Pulsed-based tasks are associated with fast-language-processing skills like recognizing syllables; pattern-based tasks engage slower processes, like hearing one voice in a noisy room. “It is the rhythm in speech that helps you fill in the gaps in noise,” she says. Drummers are especially good at this, and nearly all musicians are better than non-musicians. “Making music strengthens language.”

Then neuroscientist Adam Gazzaley describes how interactive video games could help children improve timing and accuracy, features in music that also are critical to understanding and producing language. Hart and Hussein don a virtual-reality helmet and gloves and play an experimental game that is being tested with children to see if it can improve their rhythm and response time.  “The future of AI is really to promote HI – human intelligence,” Gazzaley says. (In 2015, Gazzaley received a Society for Neuroscience Science Educator award, sponsored by the Dana Foundation.)

This quick series of talks and discussions, coordinated by Kennedy Center Artistic Advisor at Large Renée Fleming, reviews the current state of music education in the US and offers stories and statistics from people teaching and coordinating programs in schools nationwide. “Anyone who’s had intensive music training before age 7, we can see that in a brain scan,” NIH director Francis Collins says at the outset. “That ability, in music, spills out in other areas,” especially language, he says. “It’s not just a nice thing to do.”

“When you have people in sync working together in order to sing… they are building their skills in collaboration, in creativity, in teamwork” says researcher, composer, and choir master Rollo Dilworth.

“I know that not every single one of my students will become a music major,” says presenter Melissa Salguero, who teaches at P.S. 48 Elementary School in the Bronx and won the 2018 Grammy Music Educator award. “I want them to become music lovers and supporters for their entire life. Because they’re the ones that are going to raise their voice when music programs are being cut all over the nation.”

The session opens and closes with performances by the Washington Performing Arts’ Children of the Gospel Choir.

Learning and Bonding to the Beat

Researcher Laurel Trainor starts with the young and goes younger: from social effects seen after babies are bounced on and off the beat to the effects of mothers singing lullabies before and after their children are born.

“Infants use synchronous movement to help learn to navigate their social world—and decide who to trust and who to befriend,” she says. Pro tip: Singing can keep an infant happier for twice as long as talking to them, Trainor says.

A quintet of musicians of the DC Youth Orchestra also performs, and chat a bit about their experience with music and school.

The Art of the Spark: Musical Creativity

“The brain is not an abstract idea,” says neurosurgeon and researcher Charles Limb. “It’s a physical object…  you can literally hold all someone’s thoughts, dreams, in your hand.” While scientists work to isolate the variables and find math and specifics to describe how our brains work, artists seek the truth in other ways. Still, he says, “I think that maybe this is where scientists and artists actually are speaking the same language… We’re both trying to reconstruct what it means to live on this planet, aesthetically or biologically, or some combination of both.”

Focusing on creativity, he describes what he’s seen when improvisational jazz masters and freestyle rappers have their brains scanned. Images of brain areas light up some when they listen to a lecture–but seem to crackle with light when they are creating. Joining Limb are music therapist Ed Roth, a percussionist, jazz piano prodigy Matthew Whitaker, Freestyle Love Supreme co-founder Anthony Veneziale, and Kennedy Center Artistic Director of Jazz Jason Moran, who play separately and together to help us hear Limb’s points.

Limb asks the players about being an artist, what it’s like to be in the “flow state,” how to freestyle rap—and invites us in the audience to bust out our first rhymes.

Grateful Dead percussionist Mickey Hart, supported by Jonathan Murray of FunDrum Rhythm Circles and  neuroscientist John Iversen, guides us through call-and-response games, lively performances, and an interactive demonstration. Kennedy Center set out 400 percussion instruments for people in the audience to play, but you can use whatever you have at home: Join in!

More on the Sound Health program: