Back to Parent Page
HomeArticlesTeam Science 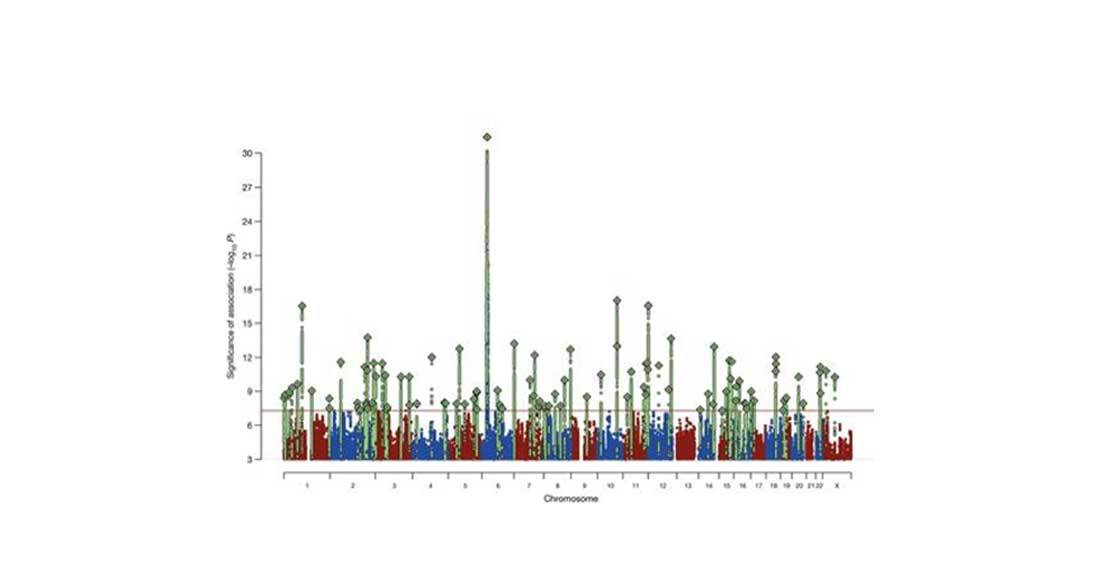 There is strength in numbers, and nowhere in science is this truer than in psychiatric genetics. Inherited factors clearly play a role in serious disorders like schizophrenia, bipolar disorder, and major depression, but multiple genes are involved, whose signals are for the most part weak, flickering within masses of data beyond the ability of any single lab to gather and analyze. Once key genes are identified, linking them to possible disease mechanisms requires the cross-disciplinary expertise of diverse investigators.

It’s a job for team science.

This is exactly what’s developed in recent years, says Anjené Addington, chief of the genomics research branch of the NIMH Division of Neuroscience and Basic Behavioral Science. “I think the genetic research community has moved forward quickly here in appreciating the need to work together.”

The approach is exemplified by the Psychiatric Genomics Consortium (PGC), a Herculean undertaking that has enlisted more than 800 investigators in 38 countries to collate genome-wide association study (GWAS) data from more than 900,000 people with and without mental disorders. As a result, “We’re starting to nail down some real findings—reliable genetic associations that are meaningful, consistent, and measurable,” Addington says.

In a 2015 paper in the journal Biological Psychiatry, she and Thomas Lehner, director of the NIMH Office of Genomics Research Coordination, proposed that “after many years of unfilled promise, the field of psychiatric genetics has seen an unprecedented number of successes in recent years,” an “inflection point” that reflects cultural, organizational, and policy changes fostering collaboration, along with advances in genomic science.

“Five or ten years ago, people were discouraged and ready to move on,” says Addington.  Recent advances “have sort of re-ignited the fire… there are big efforts ongoing, and a lot of surprising things will be coming out in the next few years.”

Gene in the headlines

One study, which aroused considerable excitement in the popular press as well as the scientific community, combined genomics and neurobiology to provide the first clue to a molecular pathway underlying schizophrenia.

“Genomic analysis has gotten good at finding regions of the genome that matter,” says Harvard’s Steven McCarroll, lead author of the paper, which appeared in Nature in January. “What’s new here is finding a specific allele that is driving the genetic result, not in a few rare cases but in data broadly distributed across tens of thousands of patients, and figuring out what variants are doing. Hopefully there will be other such victories in the future.”

McCarroll and his colleagues focused on a region of chromosome 6 encoding the major histocompatability complex, a lengthy stretch of DNA involved in immune modulation. The strongest signal for schizophrenia risk has emerged from this region in genomic analyses as far back as 2008, but which specific gene was responsible remained unclear.

Aided by a 2014 analysis of PGC data, the researchers homed in on alleles for complement component 4 (C4), an immune compound that marks pathogens and debris for destruction. They used more than 700 postmortem brain samples to establish which variants expressed the higher complement C4 levels associated with schizophrenia.

To explore how C4 might lead to the disease, McCarroll turned to Beth Stevens, a Harvard neuroscientist whose earlier work, some supported by a Dana Foundation grant, explored the complement system’s role in synaptic pruning— the elimination of unnecessary neuron connections.

Work in her lab and that of Michael Carroll, also at Harvard, used tissue culture and genetically modified mice to detail an association between C4 and pruning.

This finding accords with two fundamental observations about schizophrenia: a marked thinning of the cortical layer, indicating reduced synaptic connections; and its frequent emergence in late adolescence, when a wave of synaptic pruning normally occurs.

“This is not to say genetic propensity to excessive C4 is necessary or sufficient for schizophrenia,” McCarroll cautions. “Other factors are involved, and there may be other pathways to over-pruning.” But understanding C4 could ultimately lead to more accurate diagnosis, and development of drugs to mitigate the disease process, he says.

“[The study] was significant in the way it dissects findings from GWAS to a mechanistic understanding and potential biological explanation of what could be happening in the brain leading to schizophrenia,” says Addington. “A nice example of team science.”

A study that appeared in Nature Neuroscience online in February took an even broader approach, combining PGC data with those gathered by another collaborative group, the Enhancing NeuroImaging Genetics through Meta-Analysis (ENIGMA) Consortium.

Since 2009 ENIGMA has collated brain imaging and genetic data on more than 50,000 people, enlisting more than 500 investigators world-wide to seek connections between mental illness and brain morphology and function.

Brain imaging studies are costly, and large numbers are necessary to see small effects. “Most of the things we care about in psychiatry shift biomarkers by 1 to 2 percent” says Paul Thompson of the Imaging Genetics Center at USC, who leads ENIGMA. “People realized we can do more together than separately.”

There was no overlap: No schizophrenia-risk genes were associated with reduced brain volume of any subcortical region.

Although the findings were negative, the work was a successful proof-of-concept study, says Thompson, “a roadmap of partnership between PGC and ENIGMA. It showed that you can pool genomic and imaging data in a way to test whether psychiatric risk genes alter brain structure or function.” Such a partnership represents “a two-way conversation, between gene-hunters in imaging and in psychiatry, comparing their hands of cards.”

Among explanations for the null finding could be that reduced brain volume is a result of the disease rather than a cause, or reflects non-genetic factors.

Genetic analysis of other brain measures may show the association missing here, Thompson suggested. Subcortical volume is “low-hanging fruit,” easier than other parameters to collate from disparate sources, and ENIGMA is casting a wide net. “fMRI could be fruitful, but harder to harmonize,” he says. “There are huge cortical and diffusion tensor imaging studies wrapping up this summer.”

Not all current psychiatric genetic research involves huge data sets and GWAS. Sophia Frangou, professor of psychiatry at Mt. Sinai Medical School, NY, participates in the ENIGMA project, but some of her recent research involves a different way of relating brain imaging to genetics: a family study. “Instead of identifying individual genes that increase risk by 3 percent, we want to find factors that enable us to intervene at a level to improve mental health,” she says.

Frangou was senior author of a paper published online in Translational Psychiatry in January that compared functional MRI patterns in 41 patients with bipolar disorder, 25 siblings without the disease, and 46 healthy people with no psychiatric family history.

When identifying emotions by facial expression, both patients and their unaffected siblings showed abnormally high connectivity between subcortical regions that regulate emotional processing and frontocortical areas involved in judgment and control. This might be relevant to social communication problems common in bipolar disorder.

But the siblings also showed heightened connectivity within visual processing regions. “Our interpretation was that increased limbic-frontocortical connectivity represented a “genetic scar” that signaled BPD heightened risk, while the additional interaction reflected resilience—an ability to compensate for the genetic defect, possibly through neuroplasticity, that “must be to some extent protective,” Frangou says.

Patients, but not siblings, also had reduced connectivity in regions regulating working memory (another well-established bipolar deficit).  This suggests that “to be unwell you need to have more than one brain circuit involved,” she says.

To Frangou, resilience is more interesting than shared vulnerability. “If we could find what protects people from developing psychopathology, even with the genetic scar, perhaps we can take it further in treatment or prevention.”

She and her colleagues are testing an intervention based on her findings: cognitive training for patients that aims to increase connectivity within facial affect processing and working memory circuits — reproducing, in effect, the resilience that appears to have kept their siblings healthy.

Initial findings with the first 10 patients—in both symptom reduction and functional connectivity—have been “extremely encouraging,” Frangou says. She hopes to publish full results in 2017.