Back to Parent Page
HomeArticlesTeasing Out Effects of Practice, Emotion in the Creative Brain 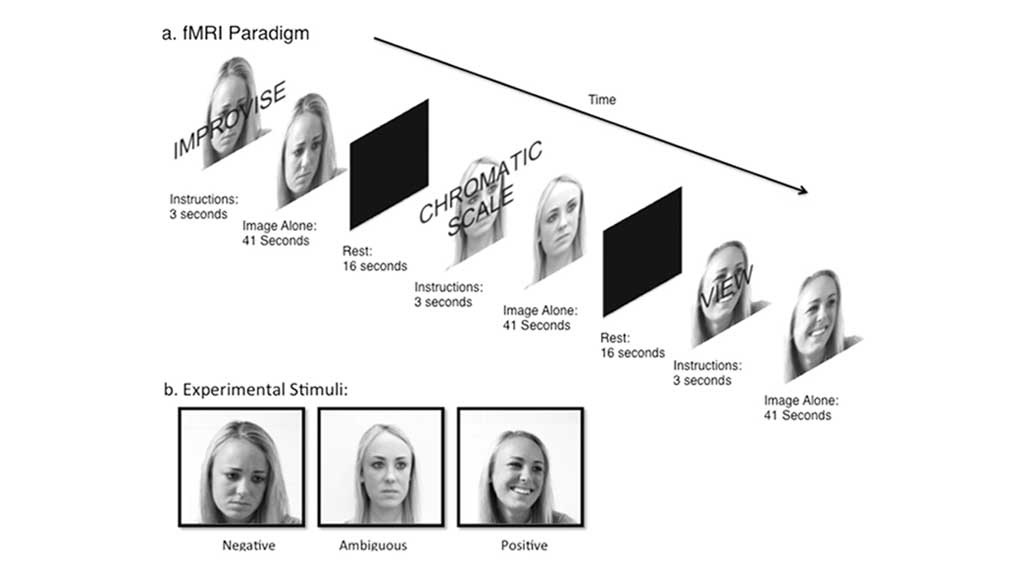 Visual stimuli used in UCSF study: (a) Schematic showing the order of fMRI stimulus and instructions for musician; (b) Photographs representing negative, ambiguous, and positive emotions. From www.nature.com/articles/srep18460

How do you get to the Village Vanguard, New York’s legendary jazz club that has, over eight decades, hosted the likes of Miles Davis, John Coltrane, and Thelonius Monk?

That it takes relentless hours of hard work to hone the technical skills of an adept musician is hardly news. But a recent study had a surprising implication: creativity itself can be trained.

The researchers looked at improvisation, the spontaneous invention and flights of fancy at the heart of jazz. Improvisation provides a useful model for creativity, neuroscientists say, because it transpires rapidly while brain activity can be tracked in an MRI scanner that, although confining, accommodates an approximation of natural performance.

Learning to be creative

In the study, reported in Journal of Neuroscience in 2014, researchers at Karolinska Institutet, Sweden, had 39 professional jazz and classical pianists fill out a questionnaire to estimate the lifetime hours they’d spent practicing and playing the piano. They also estimated how many of these hours had been devoted to improvising.

Then the pianists were instructed to improvise on a keyboard while their brain function was tracked with fMRI. Juxtaposing brain activity and personal history, the researchers saw no relationship to the hours of total practice or classical training the pianists had received. But they did see strong correlations involving improvisation experience.

“If you look at overall brain activity, you see a negative relation between improvisation training and areas involved in cognitive control and attention,” says Fredrik Ullén, senior author of the paper. “It seems to imply that the most experienced improvisers use much less executive control during this task.”

The other difference was more extensive interplay among diverse and widespread brain regions, in the more experienced improvisers.

In particular, there is apparently “more efficient communication between brain regions that represent motor aspects of musical performance and higher levels of cognitive organization. This could make [the experienced improviser] more efficient at finding musically interesting things.”

Training generally means learning tasks so well they become virtually automatic. Somewhat unexpected, Ullén suggests, is that the tasks automated here are not simply mechanical and repetitive, but what we think of as the sparks of creative discovery.

Discussions with jazz musicians suggest that “what’s happening is that they build up a library, a repertoire of techniques that are online for their use.”

The experience of flow, a sense of being at one with an ongoing activity without a sense of self-observation, “is something people experience not just in music-making but during creative behaviors in general,” Ullén says.

It accords well with the pattern of brain activity observed in highly experienced improvisers. The deactivations of cognitive control areas could contribute to a feeling of less mental effort and self-awareness, he says.

This is apparently the only study to characterize in such detail the effects of improvisation training, a 2015 review of related research suggests.

Charles Limb of University of California, San Francisco, a pioneering researcher in the neuroscience of improvisation, calls the Ullén study “very, very interesting. It clearly links how much one is able to engage the creative network to the amount of training. It’s a mistake to think that artists are ‘born that way.’” Rather, some people may have creative tendencies, interests, and aptitudes that are “sculpted over time,” he says.

“The expert’s brain is like a machine finely tuned to generate new ideas. Just as it learns anything else, the brain has to learn how to ‘do’ creativity.”

Limb did the seminal research that identified prefrontal deactivation as a hallmark of improvisation in jazz pianists.  He and others have since demonstrated similar patterns in rappers riffing in verse and artists turning portraits into caricatures.

These findings have been replicated by some, but not all other researchers, and he conjectures that Ullén’s findings may explain some of the inconsistency. “I used expert improvisers, and others might have studied ordinary musicians. Fredrik’s paper could be a real way to unify these discrepancies.”

“We tend to have a caricature, on-or-off understanding of what’s happening in the brain in creative moments. I think the reality is much more fluid,” he says. “By its nature, the creative network should be malleable. There must be thousands of things that modulate it, thousands of different creative modes.

“Our idea was to start with emotion, which most people would conclude is the main reason art exists.”

Besides strongly motivating creativity, “I would argue that emotions are why we find art and music so captivating,” says Malinda McPherson, who collaborated with Limb in research funded in part by the Dana Foundation. “One reason [the arts] evolved is to express emotions collectively, allowing us to feel them as a group.”

In the study, reported in the January 4, 2016, issue of Scientific Reports, jazz pianists were instructed to improvise with the intent of expressing positive, negative, or neutral emotions signaled by a series of photographs.

fMRI scans, as in earlier studies, showed deactivation in prefrontal and parietal regions during all the improvisations. “But these areas were strikingly less active—remarkably quiet, in fact— during the happy improvisations,” said McPherson, who is now a doctoral student at Harvard University. “This seems to indicate that musicians are entering a deeper state of flow, getting into the groove more.”

During sad improvisation, on the other hand, “we saw a bit more brain activity overall,” much of it linking the insula, which is involved in painful feelings, with dopaminergic reward circuits and the prefrontal cortex, McPherson says. “Sad improvisation may be more rewarding on a biological level.”

Indeed, as Limb points out, “in all the arts, we’re drawn toward things that depict suffering and pain, that let us experience the full range of human emotion in a safe way, to have a cathartic experience.” From this perspective, which goes back to Aristotle, preserved activity in conscious control networks would function to maintain the artist’s awareness that the sadness he or she expresses occurs on an imaginary plane, not in the real world.

“This paper really gets at the heart of the complexity of looking at creative cognition,” says Rex Jung, of University of New Mexico, whose own research addresses creativity in broader terms.

He notes that rather than deactivation of a single prefrontal region, “we increasingly appreciate the push-and-pull of different brain circuits—the cognitive control, default, and salience networks. I think they’ve captured this dynamic interplay rather well.”

The paper has implications well beyond creativity research, he suggests. If a simple emotional manipulation can produce such dramatic differences in improvisation-linked brain activity, what effect might the mood people bring into the scanner have on fMRI patterns across a range of mental phenomena?

“That’s why I tend to focus on structural differences—they don’t suffer from the vagaries of fMRI, in which networks change dynamically, moment to moment,” Jung says.

In a review paper, he summarized research that found an array of structural brain features, in more creative people, largely consistent with functional findings.  A paper just published in Scientific Reports examines details of brain structure in more than 200 people, in relation to self-reported musical creativity.

He and fMRI researchers like Limb “look at each other’s work and try to interpolate across studies,” says Jung.  What’s needed now is a single study that addresses the complexities of creative activity in a large sample “to understand how functional activation and deactivation mold the brain structurally, in a single cohort, over a long period.”

Practice, no doubt, will be part of the picture.