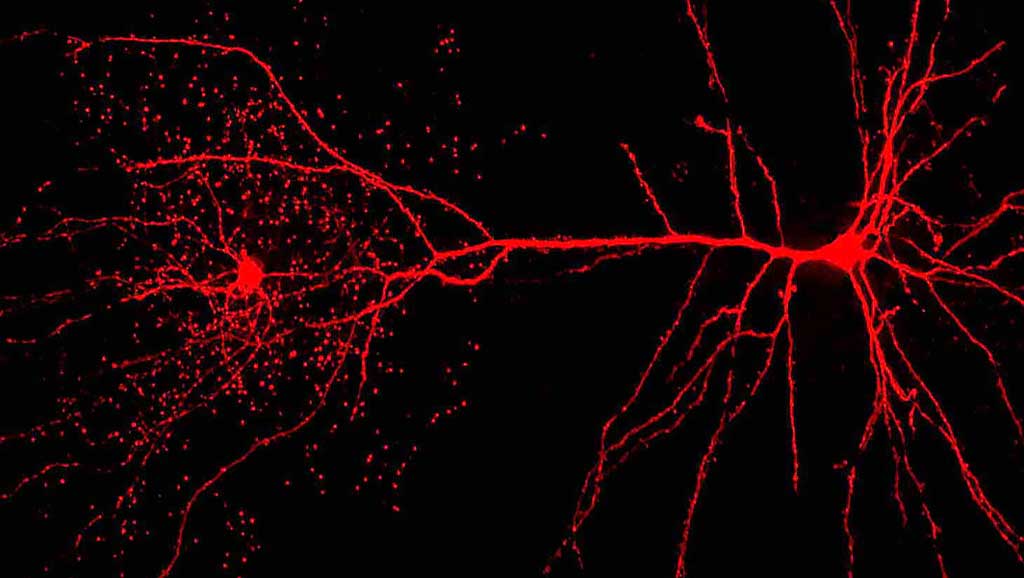 An image of a rosehip neuron (left) and a connecting pyramidal cell (right). Image courtesy of Tamas Lab/University of Szeged

How many different types of brain cells can be found in the brain?

It’s a tough question to answer. Today, most neuroscience textbooks estimate there are about 10,000 different types of neurons, give or take a few thousand, in the central nervous system. But as Spanish pathologist and “father of neuroscience,” Santiago Ramón y Cajal once said, “The brain is a world consisting of a number of unexplored continents and great stretches of unknown territory.” Ramón y Cajal’s own intricate illustrations of individual brain cells, created in the late 19th century, attempted to demonstrate the incredible heterogeneity to be found in the brain—but there is only so much one man can do armed with nothing more than a microscope and a paintbrush. Today, neuroscientific laboratories across the globe are using innovative and complementary techniques to identify new types of neurons, including the “rosehip,” a specialized inhibitory brain cell thought to play a role in higher order cognition.

In 2014, the National Institutes of Health (NIH) released Brain 2025: A Scientific Vision, a report outlining its goals for the BRAIN Initiative project. BRAINI’s first goal was a census of neuronal and glial cell types. There’s good reason why this is number one on the list: We still have little understanding how many different types of neurons reside in the central nervous system, or what function they may serve, says John Ngai, director of the QB3 Functional Genomics Laboratory at the University of California Berkeley.

“There are about a hundred billion nerve cells in the brain. These cells drive cognition, emotion, and behavior. They play a role in health and disease. But we still can’t say how many different types there are. We need this census so we can better understand how many different types—and how they drive behavior,” he says. “Think of it like a computer. If we don’t know what the parts of the computer are, or how they come together to make the computer function, we can’t understand how that computer works.”

But compiling the neuron census, or brain “parts” list, Ngai says, is a challenging task. “Finding a way to identify these different types has been a big problem since the time of Ramón y Cajal,” he says. “Luckily, we now have a lot of new techniques that can help us reveal the diversity of cell types in the brain moving forward.”

Sebastian Seung, a professor at the Princeton Neuroscience Institute, is relying on anatomy, machine learning, and a few thousand eager volunteers to help isolate and identify new cell types in the retina. His lab released EyeWire, an online game, where volunteers trace the exact anatomy of neurons captured using electron microscopy. They are helped by a complex artificial intelligence algorithm that suggests where the connections are going—EyeWire players correct the program when it goes awry.

“We can visualize and extract the anatomy of every single neuron in a particular brain structure,” says Seung. “Where Ramón y Cajal could only look at a small fraction of the neurons at any given time, using chemical means to trace each branch of a cell, we use a computational means to follow all the branches. EyeWire enlists volunteers from all over the world to trace them.”

To date, the game has identified six potential new cell types just in the retina. And Seung believes, as more technologies become available, more cell types will be identified.

“This kind of logical process will enable us to reconstruct anatomy at a much faster rate than we’ve ever been able to before,” he says. “And we hope to move beyond the retina and extend to other parts of the brain, too.”

Other labs are taking a genetic approach for the census. Ngai’s lab at Berkeley is using single cell sequencing, a next-generation sequencing technique, to isolate, identify, and then catalog different cell types in the brain.

“Basically, we’re identifying cells based on the genes they express,” he says. “It’s a very powerful way to categorize cells. Then we can build up from there to better understand function. Who does that cell connect to? Who connects to them? What is the cell’s electrical properties? What neurotransmitters do they respond to? What neurotransmitters do they release? By putting all these things together, we can start moving towards charting all these unknowns.”

Both Seung and Ngai say that it will take the combination of multiple techniques to help create a full and thorough cell census. This is well illustrated by the recent discovery of the “rosehip” neuron by researchers at the Allen Institute and Hungary’s University of Szeged. Rebecca Hodge, a senior scientist at the Allen Institute, says that by using a combination of large-scale single nucleus RNA sequencing, a genomic technique, and physiological techniques, the two labs identified a unique inhibitory neuron that resides in the outermost layer of human cortex.

“We discovered we both were looking at this one type of cell. We had been looking at the gene expression pattern and Gábor Tamás’ lab at the University of Szeged was looking at the shape and morphology,” she says. “But not only did we find this really interesting neuron that no one had ever seen before—we saw it was a cell that didn’t have a correlate in mouse cortex.”

The rosehip, an inhibitory neuron, has a unique branching shape that may help it better mute signaling in neighboring cells. Hodge says she and her colleagues will be working to better understand its role in cognition. It may be that the rosehip helps to control information flow—and higher order cognitive function.

“We know a bit about how it connects to other cells in the cortex, and what that potentially may mean for circuit function,” she says. “We don’t really know yet, in humans, how that translates into behavior. But we’d like to find out.”

Ngai says the rosehip finding is a well-executed study that shows what neuroscientists can still discover about the most basic building blocks of the brain.

“This is just another example of going in with the right lens and realizing, ‘Oh my gosh, look what you can see!’” he says. “It’s also a nice demonstration of the power of single cell sequencing to identify previously unknown or underappreciated cell types.”

Hodge says that these converging technologies are very powerful and will help us get a more complete picture of the different types of cells in the central nervous system.

“Individually, each method can only take you so far,” she says. “But together, they can give you a lot of information about a cell and then offer clues about how we can learn about how it functions and how it may contribute to human behavior. It’s a really exciting time to be studying this.”