Back to Parent Page
HomeArticlesThe Fast and the Curious: Science on Wheels 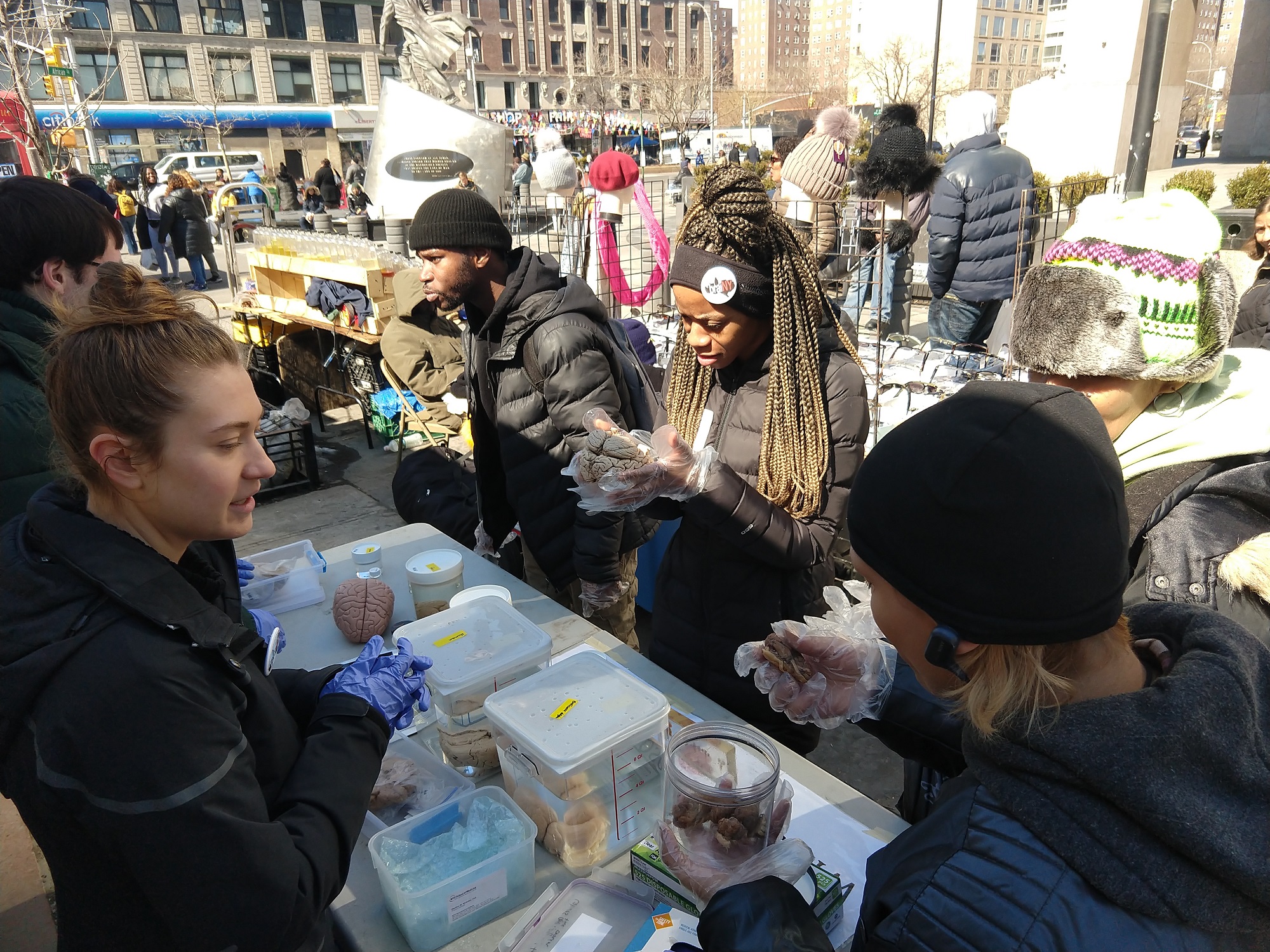 Brain Awareness Week is all about outreach, and the BioBus–with its solar-panels, lab equipment, and Ph.D. cadre of scientists–is well equipped on its mission of bringing science exploration and the thrill of discovery to historically underrepresented communities. The organization lists its goal as helping “minority, female, and low-income K-12 and college students in New York City discover, explore, and pursue science.” It should come as no surprise then, that the science and activities on-board are tailored to jump-start the spark of curiosity nascent in tomorrow’s scientists.

Curious minds were encouraged to peer into the vehicle’s research-caliber microscopes, offering them peeks into the worlds of neurobiology and a disease affecting many millions of people in the US—Alzheimer’s. A BioBus scientist at the station explains that what was being seen were amyloid and tau proteins in a neuron, which research shows are the hallmarks of the disease. The abnormal amyloid plaques and neurofibrillary tangles appeared as dark spots on a monitor, and the scientist assisted in identifying the markers, explaining that there is much we do not know but continue to study. The Centers for Disease Control and Prevention predicts that through 2060, the burden of Alzheimer’s disease and related dementias will increase to 13.9 million Americans, jumping from 1.6 percent of the population to 3.3 percent. Will young minds heed the call to study science and bring us closer to cures and treatments?

Science, Technology, Engineering, and Math (STEM) are widely recognized as high growth sectors in the U.S., and as the demand continues, racial diversity and the gender gap remain a problem to be solved.

While it is fair to say that representation varies widely between occupations, there is a clear disparity among women and minorities in certain STEM disciplines. According to a 2018 Pew Research Center analysis of census data, women continue to be underrepresented in the physical sciences and engineering, comprising 39 percent and 14 percent of the employed adults in those fields, respectively.  With only 9 percent of positions held by black men and women, and 7 percent by Hispanic men and women, minorities are underrepresented across STEM jobs. These figures are why the work and outreach of organizations like BioBus are vital to communities that may otherwise have little exposure to the sciences.

Brain Awareness Week has arrived in style! Visit our Calendar of Events to search internationally for brainy activities in your area! For a “Big Apple” friendly calendar, you can visit braiNY. If you’re interested in having the BioBus team bring the thrill of discovery to your school, head over to BioBus.org to book a visit.

Indigo Rose, 24, a research technician at NYU and first-time volunteer with BioBus, shared his enthusiasm for the outreach taking place just down the street from Harlem’s famed Hotel Theresa. “Today is really exciting; there are so many people coming in,” Rose said. “There are so many people that seem interested in the brains, I’m really happy about it.”