Tau protein helps nerve cells in the brain maintain their function and structure. When tau turns toxic, replicates, and spreads, neurons misfire and die. Kenneth S. Kosik, M.D., professor and co-director of the Neuroscience Research Institute at the University of California, Santa Barbara, was a member of one of several research groups that originally discovered tau protein in the Alzheimer’s neurofibrillary tangle. In this month’s Cerebrum feature, “Tau-er of Power,” he points out that if he and other tau researchers can better understand tau, then progress can be made in fighting neurological disorders linked to this protein, including frontotemporal dementia, chronic traumatic encephalopathy (CTE), and Alzheimer’s disease. 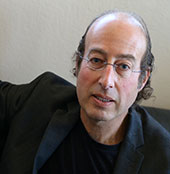 Besides your medical degree, you also have a master’s in English literature. What motivated you to pursue neuroscience research?

Kenneth Kosik : I was always interested in both literature and science. My master’s thesis, on the American novelist Thomas Pynchon, took a scientific view of his entire body of literature at the time. The power of literature took the lead for a while and then a few practical considerations began to surface and I tilted the other way. But my outlook on the commonality of the two disciplines: science and the humanities, has never changed.

What attracted you to studying tau protein, and why is it important?

After my neurology residency, I realized that I enjoyed learning medicine more than practicing it. I also realized that patients aren’t necessarily looking for creative doctors; they prefer physicians who have seen their condition thousands of times before and know exactly what to do.

So I began to cast about for some other direction and research became increasingly attractive. And because I’m an M.D., not a Ph.D., I had to start all over again. In the third year of my neurology residency, I was shown some protein gels and, although it may sound peculiar, I was simply blown away by their beauty. I became a post doc in a lab that utilized protein gels and received a grant to do some research on Huntington’s disease from the Huntington Disease Foundation, under the direction of Nancy Wexler. That got me further interested in neurodegeneration. I conducted the work on this project in a lab that was mainly interested in Alzheimer’s disease. We were doing lots of cell biological analyses. After a few years, I began to explore microtubule-associated proteins like MAP2. We sort of stumbled into tau, which turned out to be the answer for tangles. We were one of several groups that discovered tau in tangles and that really promoted my interest.

When did tau first appear on the radar screen in neuroscience?

The discovery was made in Mark Kirschner’s lab, when he was at UCSF, by a member of his group, Don Cleveland. Although a hint as to the existence of tau predated their work, they published the key paper in 1977. They were both basic cell biologists studying microtubules and found a biochemical fraction they called tau. Relative to other scientific activity at the time, progress on tau languished until the nearly simultaneous discovery by four groups in 1985 and 1986 that tau was the principle component of the neurofibrillary tangle in Alzheimer’s disease and several other conditions. Our paper in PNAS ( Proceedings of the National Academy of Sciences) has now collected over one thousand citations.

Why is tau’s lack of structure important?

Microtubules are very dynamic structures. They move cargo around cells and maintain the structure of axons. As I mention in the article, they are kind of the railroad tracks for cells. The way to think about it is that these railroad tracks are not static; they are dynamic and redirecting cargo to new destinations all the time, simply by laying down new tracks and pulling up old ones rather than by re-routing cellular cargo on existing tracks. To maintain that microtubule population in cells, the binding of tau and microtubules is very highly regulated because it’s tau that stabilizes those railroad tracks. When tau is removed, the tracks become destabilized and are impaired in the ability to assemble.

How does folding or misfolding relate to tau?

Some proteins (and tau is one of them) have a predisposition to fold in a way that causes other copies of the same protein (in this case, tau) to form aggregates or bind to itself. Seeding is a process when the first tau molecule changes its shape and begins to attract other tau molecules. When the second and third tau molecule binds, we call those structures oligomers and, when they begin to elongate, we call them fibrils. Once they get really big, with molecular weights in the millions, we call them filaments. The type of filament in Alzheimer’s is called a paired helical filament.

This property of tau toward self-assembly is shared by other proteins and collectively they cause a large proportion of neurodegenerative diseases such as Lou Gehrig’s disease, Huntington’s disease, Parkinson’s disease, among others. Tau is but one example of an entire field in biophysics that studies how different proteins misfold in ways that create pathology and the cellular proteins that protect them from such mishaps.

Tau is also associated with chronic traumatic encephalothopy (CTE) and the sports concussion crisis. Do we have any idea why trauma to the brain causes tau to spread?

There is no good hypothesis. We just don’t have a good understanding of the mechanism. But it is crucial we learn more about this serious problem.

You end your article by referring to “the peaks and valleys” as it relates to tau research. Can you elaborate on what investigators hope to learn about tau in the next five years?

That tau may spread from cell to cell has gained a great deal of traction. When it spreads, it will template the misfolding of tau in adjacent cells. Among the things we have to learn are: How does tau get out of the cell and in what form?  What is its shape and what are its pathogenic implications when it is outside the cell? How does it get back into adjacent cells? What are the details of the passage through the membrane? How much time and how abundant is it in each of these compartments?

The reason this process is so important relates to an idea currently in vogue: treat tau diseases with a tau antibody.  The rational for this approach is that tau’s lifestyle includes an extracellular existence and, if that’s true, then it provides the opportunity for an antibody to come in, grab it, and destroy it. Understanding the process of seeding and spread is important for this current therapeutic direction.

Another exciting development is in vivo imaging of tau. Just as we see amyloid in the living brain so we can see tau tangles in the living brain. The full implications of this technology are just emerging as the technique gets close to clinical application. Among the insights that will come from tau imaging is the ability to see tau tangles in the brains of football players, possibly well before there are symptoms and therefore determine who is at risk for the condition we call CTE. We certainly need to become cleverer if we are going to figure out a way for people to play some of the more intense contact sports while avoiding serious longer term consequences.

Given the prevalence of the many serious medical conditions that result, we must learn to prevent the tauopathies and overcome tau apathy.