Back to Parent Page
HomeCerebrumThe New Science of Spaces 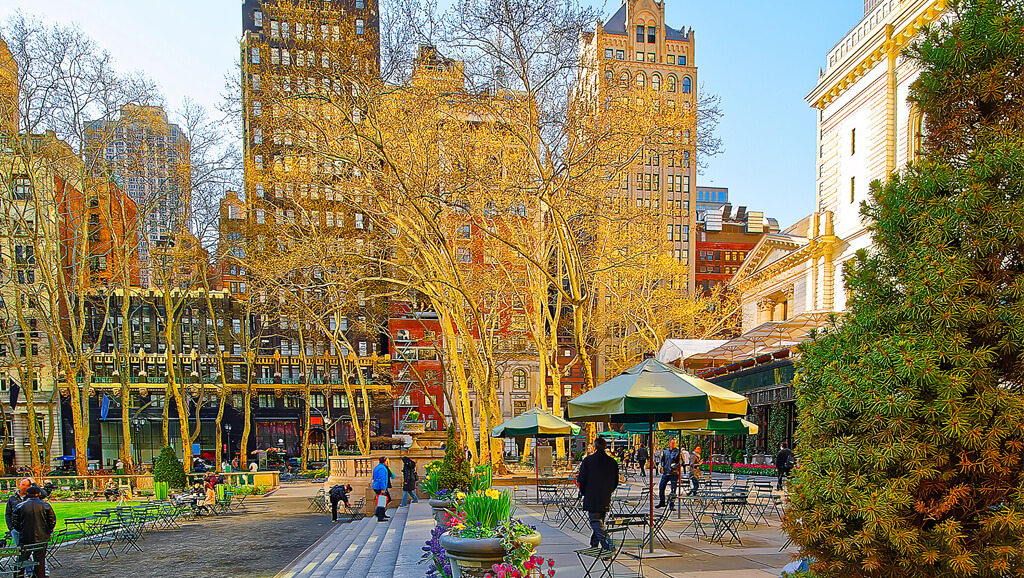 Bryant Park in midtown Manhattan—once known for drug use and considered a no-go area—is a prime example of how creating green space can contribute to relieving stress and anxiety for commuters, residents, and visitors. Since the 1980s, when new management for park restoration and management was established, the park has gradually made improvements. Today, the 9.3-acre park serves as an oasis for people to lounge, take classes, dine, ice skate, shop—and feel safe.

IN more normal times, the winter commute from northern New Jersey to Manhattan often involves standing in near-freezing temperatures to wait for the bus, which is often late and almost always out of seats during rush hour. Upon arriving at New York’s Port Authority Bus Terminal, you wait your turn for the escalator and then march alongside fellow commuters toward the doors that empty out into the streets of Times Square.

If you walk east, you’ll reach Bryant Park, a ten-acre respite from the skyscrapers that tower around it. This time of year, a holiday market lines the perimeter, and an ice-skating rink spans the field where people sit in the sun during warmer months. The stress and anxiety of the commute does not disappear completely—you’re still in Midtown, after all—but walking among the London Plane trees throughout the park never fails to take the edge off and add calm to the monotonous trip.

Bryant Park, an enclave once known for drugs and crime, is an example of how environment can be altered to improve psychological and physiological states. While scholars have been studying the psychological aspects of environmental design since the 1970s, environmental neuroscience is a small, but growing, area of research, a field concerned with the way physical environments interact with the brain and behavior, says Justin Hollander, Ph.D., FAICP.

Hollander studies how cities and regions manage physical change, along with the cognitive, health, and social dimensions of community well-being. As professor of urban and environmental policy and planning at Tufts University, he and his colleagues convened the First International Conference on Urban Experience and Design last spring, marking a first for researchers, scholars, architects, planners, and designers to come together under this umbrella of science to discuss new ways of assessing urban spaces.

It’s no surprise that living near trees and greenspace is more beneficial to health than living near the grit and congestion of a city, but the extent it plays—especially on attention and memory—is the focus of research by Marc G. Berman, Ph.D., an associate professor of psychology at the University of Chicago and principal investigator in its Environmental Neuroscience Lab. Berman’s lab has found that if you had ten or more trees per city block, it positively impacts people’s perception by one percent. Researchers have also found a positive association between greenspace around schools and cognitive development in children.

The psychological well-being of a population can be associated, in part, with its proximity to greenspace in both urban and rural settings, according to Berman’s 2019 study in Science Advances. The benefits from interactions with nature—from potted plants and gardens, to public greenspace and wilderness—include increased happiness, positive social interactions, improved manageability of life tasks, and decreases in mental distress. “Cities are centers of prosperity, employment opportunities, access to education, and cultural advancement, all aspects of life that may promote mental health,” he says. “However, they can also be associated with decreased access to nature, especially for individuals living within economically deprived urban areas.”

That’s why restorative environments, such as the mountains or the woods, are places that provide a sense of being away (i.e., mental separation), a feeling of extent (i.e., large enough spaces to explore), and compatibility with goals, say researchers. This feature of “compatibility” is thought to be the way a person interacts with his or her environment at a given time. For example, if you work close to an urban park where you can relax over lunch, you are likely to feel restorative benefits on days when you are stressing from a morning’s worth of difficult work issues.

Just as interacting with more natural environments such as trees, water, and grass can positively impact cognition, affect, and overall health, we are prone to feel, think, and act differently when we are in disorderly environments. Berman and colleagues outline disorderly environments as spaces strewn with litter, graffiti, or abandoned buildings, for example. These environments have been linked to “detrimental outcomes” such as perceived powerlessness, distress, depression, and anxiety, and the influential broken windows theory, which links scene-level social disorder cues (e.g., litter, graffiti) to crime and general rule-breaking.

The Impact of Technology

Incorporating eye-tracking technology with their research, Hollander and his colleagues theorize that distinct contexts (e.g., whether you’re walking down a quiet, rural street or in a busy city) can influence cognition and behavior on an unconscious level. Imageability is an important principle in planning and architecture, he points out. Our brains are wired to seek out and remember patterns within our environments, and imageability determines how specific physical elements and their arrangement will capture attention, evoke feelings, and create a lasting impression.

The group recently published a study to demonstrate how the combination of eye-tracking technology and photographs helps to better understand human responses to neighborhood designs in New York City. How we interact with traditional design, how it puts us at ease, and what about it helps us orient ourselves, were some of the questions they sought to answer. “These images depict important public spaces where hundreds of thousands of people regularly congregate or pass through, thus their design attributes really matter,” says Hollander.

Another concern his colleagues in the field are weighing—at least in the short term—is the pandemic’s impact on urban design, as commuting and public access are reconsidered. “Urban spaces are generally designed for cars, and this research can show how to better design places to meet human needs at a biological level, to encourage them to walk and be active,” says Hollander. “Likewise, the design of places impacts people’s well-being and mental health. Understanding this impact and designing cities the right way can ultimately make people happier and healthier.”