Back to Parent Page
HomeArticlesThe Revival of Brain PET 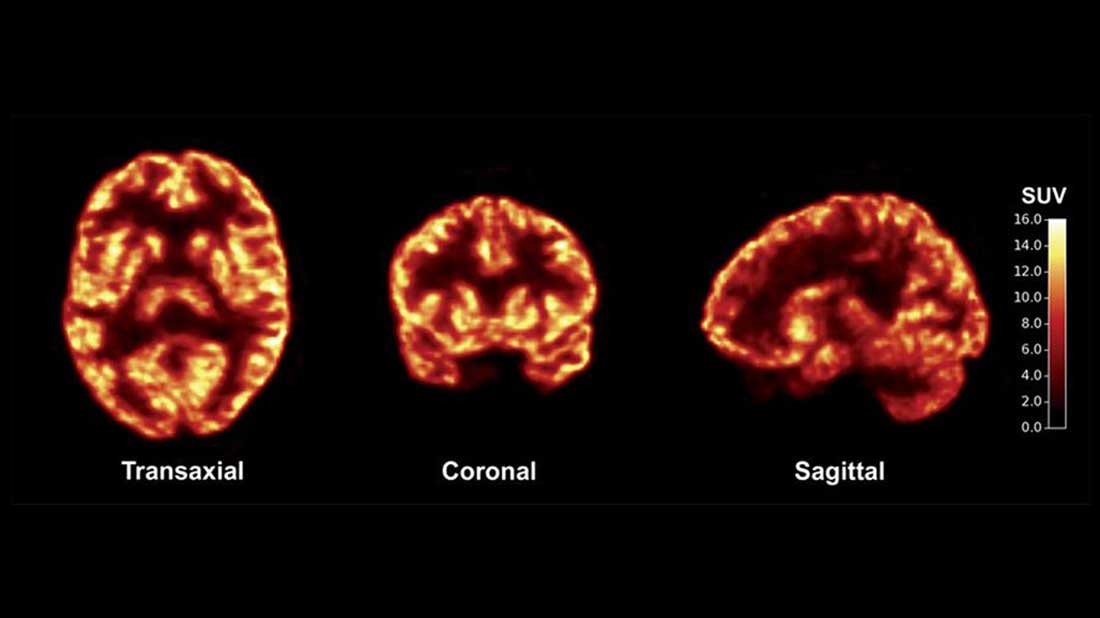 A brain scanning technique invented nearly half a century ago gave researchers important insights into brain function, but was superseded in the early 1990s by a newer, more sophisticated method. Significant advances in recent years have, however, enabled researchers to visualize certain cellular and molecular processes in the living human brain for the very first time, leading to what might be called a revival of the old technique.

Developed in the early 1970s, positron emission tomography (PET) imaging imaging involves injecting small amounts of a radioactive substance into the body. This ‘radiotracer’ binds to specific molecules within a particular body organ or tissue; the gamma rays it emits can be detected by the scanner, which then produces three-dimensional images showing the levels and distribution of the radiation within the structure.

The method contributed enormously to our understanding of the healthy and diseased brain due to the introduction of tracers that bind to oxygen, which gave researchers a new way of investigating brain metabolism. Another major advance came in 1983, with the development of tracers for neurotransmitters such as dopamine and their receptors, that provided fresh insights into the neural basis of schizophrenia.

Using these tracers, researchers confirmed that schizophrenia is associated with elevated levels of dopamine release in the striatum. By measuring the binding of antipsychotic medications such as haloperidol to dopamine receptors, they also showed that the extent to which these drugs block the receptors is closely correlated with the relief of disease symptoms.

These studies further revealed distinct thresholds for the desired and unwanted effects of antipsychotic drugs. Haloperidol has antipsychotic effects when it occupies 70 percent of D2-dopamine receptors in the striatum, but causes movement problems as a side effect when it occupies more than 80 percent of the receptors. These findings changed the way schizophrenia is treated: Clinicians reduced the dosage of antipsychotics they gave to schizophrenic patients, so that the drugs would alleviate disease symptoms without causing these side-effects.

The use of brain PET imaging has declined over the past 20 years, in part due to the introduction of another technique, functional magnetic resonance imaging (fMRI), which is much cheaper. It measures changes in the rate of blood flow around the brain, as a proxy for brain activity.

But the recent development of second-generation radiotracers that bind to various other brain proteins has enabled researchers to use PET to measure or visualize certain processes in the live human brain for the very first time, and are likely to yield yet more valuable information about neurological and psychiatric conditions.

Last year, for example, researchers at Imperial College London used one such tracer to show that microglial cells are hyperactive in the brains of people with schizophrenia. Microglia are the brain’s resident immune cells; activated in response to brain inflammation, they clear away bacteria and other pathogens that enter the organ. Microglia also help eliminate unwanted synaptic connections from the brain, a process called synaptic pruning.

The finding that microglia are hyperactive in the brains of schizophrenic patients suggests that inflammation plays a role in the disease and that awry synaptic pruning by microglia may contribute to its symptoms. They further suggest that widely prescribed anti-inflammatory drugs such as acetaminophen might be useful for treating the disease.

“Microglial activation was first imaged with PET in the late 1980s, but there were technical challenges,” says Eugenii Rabiner, a reader in molecular imaging at King’s College London, “so although such radiotracers aren’t entirely new, this second generation of tracers is a big improvement.”

Aberrant synaptic pruning is implicated in a host of other neurological conditions, including epilepsy and Alzheimer’s disease. Pruning also occurs throughout adolescence as a matter of course, particularly in the prefrontal cortex, which continues to mature well into the second decade of life. During this period of life, some 40 percent of all synapses in the brain are pruned away; consequently, executive functions such as planning and decision-making become more efficient (see The Teen Brain: Primed to Learn, Primed to Take Risks).

Using a tracer that binds to a synaptic protein, researchers at Yale University have visualized the density of synapses in the living human brain for the very first time. Earlier this year, they reported that PET imaging using this tracer is sensitive enough to detect the loss of synapses in patients with temporal lobe epilepsy.

Tracers like this could possibly be used to test the idea that excessive pruning occurs in the brains of patients with Alzheimer’s disease and schizophrenia, and to visualize the time-course and extent of the pruning that takes place during adolescence.

“Researchers have been trying to measure synaptic density for a while, but the tracers weren’t that great,” says Rabiner. “This is a big advance because it allows us to image all the synapses instead of just subsets of them. If we can to image synaptic density in patients at various changes of disease and see any changes, it could be a powerful tool.”

In another recent study, researchers from Massachusetts General Hospital used PET imaging to visualise histone deacetylase (HDAC) levels in the live human brain for the first time. HDAC is an enzyme which catalyses epigenetic modifications that close off chromosomal regions so that the genes they contain are switched off.

Epigenetic modifications are now implicated in a variety of neuronal mechanisms, as well as in psychiatric conditions such as depression and schizophrenia, and neurodegenerative disorders such as Alzheimer’s disease. The tracer used to visualize HDAC levels is non-specific–it shows the overall level of the enzyme in the brain, but not which genes it is deactivating. Further research might, however, lead to the development of more specific tracers of epigenetic events, and determine which kinds of modifications are important, which genes are activated or deactivated, and exactly where in the brain this happens, in a given disease.

Japanese researchers have made an advance that could help to answer some pressing questions about depression. In humans, depression is associated with reduced volume of the hippocampus, a brain structure that is essential for learning and memory (see  One Man’s Continuing Contribution to the Science of Memory). Numerous experiments show that adult neurogenesis, the production of new brain cells, is significantly reduced in rodent models of depression, and that Prozac and related antidepressants stimulate the growth of new cells in the hippocampus.

We know that the human hippocampus produces about 700 cells per day throughout life, but it is still not clear if these cells are of any importance for brain function, or if antidepressants exert their effects by stimulating hippocampal neurogenesis.

The Japanese researchers developed an enhanced PET imaging technique that is sensitive enough to detect small changes in the rate of adult neurogenesis in the rat hippocampus, including those produced following administration of an antidepressant. Applying the method to humans could finally begin to clarify the role of adult neurogenesis in humans.

It could, for example, help to determine whether new cells produced by the adult brain are of any functional significance, and whether antidepressants work by stimulating neurogenesis, as has been reported in rodents. If that turns out to be the case, PET imaging of adult human neurogenesis could eventually provide an objective way not only of diagnosing depression, but also of monitoring the therapeutic effects of antidepressants.

More recently, a research group at Icahn School of Medicine at Mount Sinai reported that they had used PET to visualize pathologies in the brain of a retired National Football League player who had suffered 22 concussions during his career and experienced various neuropsychiatric symptoms. The tracer they used has previously been used to image Alzheimer’s disease pathology; it could also be used to chart the progression of chronic traumatic encephalopathy (CTE), the progressive neuroedegenerative condition seen in athletes, military veterans, and others who can sustain repetitive head injuries.