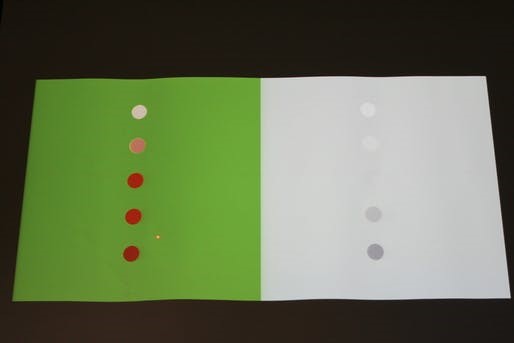 An illustration in Livingstone’s presentation that demonstrates how color and luminescence affect what we see in markedly different ways.

Dana Alliance member and Professor of Neurobiology Margaret S. Livingstone, Ph.D., spoke about art and the brain on Tuesday night at this year’s annual Irving H. Jurow Lecture at New York University’s College of Art and Science. Her lecture demonstrated to the audience how looking at art reveals how we see and what mechanisms are at work in the brain to create visual perception.

All artists use lines in their works to create shapes that are interpreted by the brain as specific contours or forms. Center-surround antagonism enables edge detection and contrast enhancement within the visual cortex. Livingstone explained center-surround antagonism as a process by which light creates signals, also known as action potentials, in retinal cells. Certain cells in our visual field are excited while other cells fail to fire. Neurons in our visual cortex are either activated or inhibited to create an accurate depiction or mental map of what we see.

Painting and art rarely represent realistic accuracy even though they are photorealistic. Shadows, reflections, and perspectives defy the laws of physics and, very often, artists emphasize and play with how our vision works and how we see. Our visual system involves two processing streams that originate from the retina— the higher visual cortex ventral stream (the “what” system) and the older and more ancient dorsal stream (the “where” system). The ventral stream recognizes a specific object such as a bike or an animal and the dorsal system allows us to sense where objects are in space, including depth and position.  The dorsal stream is colorblind—the “what” system can see colors but the “where” system can’t.

How a piece of art can look very different in black and white versus color and evoke different depths is apparent in a slide that Livingstone showed with a line of circles in both color and grayscale (above). Since the “where” system is colorblind, both luminescence and color are needed in an artwork to see three-dimensionality. For instance, Monet creates a sense of motion in his works by using different colors of the same value (luminescence). The exact position of the objects is difficult to determine since he uses equal value colors, creating a palpable sense of motion.

Livingstone went on to explain that in the Mona Lisa by Leonardo Da Vinci, the sfumato technique he used on the features of her face manipulates our interpretation of her expression. Since the lines are indistinct and our visual acuity is not as accurate when not focusing on one point, the viewer cannot focus on her eyes and her mouth at the same time. This makes her look like she in smiling in our peripheral vision but not necessarily smiling when we look directly at her mouth. How our vision works has made her mysterious and elusive. The differences between peripheral vision and central vision also explain why photo mosaics work.

How we interpret human faces, vital to social interaction, also involves local and inhibitory processes in the visual cortex. Livingstone explained that in the higher visual cortex, certain cells are excited by certain facial features while other cells are inhibited. In our temporal lobe, there is a modular organization of how we recognize certain objects. The ability to recognize faces is governed by one of these specific modules where “face cells” or neurons in the brain respond to certain facial features. Face cells fire or are inhibited based on how much important facial features deviate from a learned average of facial features we have seen, helping us to identify the person we are looking at, based on their unique appearance.

Livingstone also pointed out that many artists and musicians tend to have differences in how their visual perception functions. For example, many artists have been found to lack stereopsis, or the ability to combine images in the visual cortex based on visual input from both eyes focusing on the same point. Amongst those that lack stereopsis are contemporary painters such as Gustav Klimt and Chuck Close.

Dyslexia, another condition common amongst artists and musicians, occurs when there are changes in how images are processed in the “where” or dorsal system. Those with dyslexia have trouble determining the position of letters, most likely because black and white text appears to not have enough contrast or depth and difficult to determine where letters are on the page for reading. They can see the correct letters but, they cannot place them. To better understand what it is like to have dyslexia, imagine trying to read light yellow text on a white background. How we see varies between people and defects in the normal visual processing system can be an asset to artists, allowing them to create visually-provoking works.

Livingstone emphasized that her takeaway message was “vision is information processing and not image transmission.” In other words, how our brain forms images is based on how visual input is processed, and it not a simple relay of information from our eyes (retina) to our brain. Seeing depends on whether neurons are firing and local synaptic connections between neurons in the visual cortex.

Many of the images and videos Livingstone utilized during her presentation are available on her website, as are other similar lectures she has given. After the lecture was over, attendees could wander into the Grey Gallery exhibit, “The Beautiful Brain: The Drawings of Santiago Ramón y Cajal,” to view the drawings and illustrations of the brain.  The exhibition is on view until March 31st.