You recently published results that seem to challenge the widespread assumption that functional MRI imaging reflects local neural activity underlying the given task. What is the take-away learning from this research? 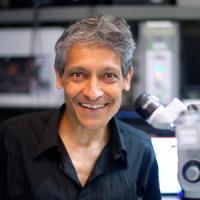 AD: The biggest take-away idea is that there are multiple types of neural activity that are measured by fMRI, and they are not all equal. The most simplified interpretation from fMRI studies has been that a change in the fMRI signal means a uniform change in neural activity, so that, say a doubling of the signal indicates a doubling of neural activity in that same part of the brain. This presumes that everything is on the same common currency. By recording both local neural activity-using electrodes-and imaging responses from monkeys playing simple video games we showed that the situation is more complex. One part of our recorded imaging response was clearly related to the visual stimuli the monkeys were getting and could be predicted nicely from local neural activity; for this component, a doubling of the fMRI signal did indeed correlate with a doubling of the neural activity. However, much to our surprise, the recorded imaging also contained a huge task-related signal that was not driven by visual inputs and which only showed up when the monkeys were engaged in their video game. Most surprisingly, this task-related signal could not be predicted from any of the local neural responses recorded with our electrodes.

Should we therefore be taking all fMRI results with a grain of salt?

Absolutely not. I would take a positive point of view. This work opens up ways of investigating interesting questions and different sets of questions. We showed that the imaging signal contains different parts, some of which were related to input stimuli and local neural activity, while others were related to the task and internal brain states of attention, feedback, and so on. So it is actually very rich. The challenge lies in designing studies so that we can parse the imaging signal into these different components and get complementary insights into brain function.

I want to stress that I do believe the task-related signal is also neural, but it likely reflects a neural mechanism very different from the one driving imaging responses to the visual stimulus. Our earlier papers were over-interpreted by some who suggested that we did not believe the imaging signal was neural and so did not believe in fMRI. That was not at all what we intended readers to take away; and it was an unfortunate distraction to the results.

How does this work advance the field of neuroimaging?

We have shown that you can design your imaging task in a way that actually strengthens the correlation between local neural activity and the measured signal. There is a broad understanding in the field that the imaging signal fits local neural activity with an accuracy of about 40 to 50 percent. However, when we structure the task to clearly separate the imaging signal into a component that is task-related and a component that is stimulus-related, then subtract the one from the other, the stimulus-related signal syncs up with local neural activity with better than 90 percent accuracy.

The work that we’ve done is not invalidating everything we thought we knew about fMRI, but rather it is allowing the community to ask more interesting and more difficult questions. That’s the way I would like to interpret my work.

Can you describe how you were able to show this?

We did this by making the task independent of the stimulus. The monkey was trained to do a periodic task. The animal had to simply fixate on the computer screen each time a particular visual cue appeared and then hold its fixation until the cue changed color, at which point it would receive a juice reward. This generated a large task-related imaging signal. While the animal was fixating, we flashed on the screen a stimulus, completely independent of the task. We used stimuli of various strengths, including blanks where the animal just saw a gray screen. As far as the monkey was concerned, all it had to do was attend to the cues and completely disregard the stimulus.

So, essentially that piece that you’ve subtracted out has been the piece that’s been muddying up the signal-to-activity correlation up until now?In a sense yes. On one level it’s been messing up the results, but on another level, I think it’s extremely interesting because it is a signal of preparedness. It is only influenced by behavioral measures-by reward and by the animal’s performance in the task, for example-so it is indicative of more complicated brain processing. By separating out these two signals, we’ve really separated two entirely different classes of imaging signals. One class is driven in a very traditional way, by the direct visual input the subject is getting. The other reflects an internal brain state of arousal, attention, preparedness, inhibition, reward, all of these other things that might be considered an endogenous anticipatory state.

Your work showed that this anticipatory signal is dependent upon the animal’s sense of reward and on its performance in the task. What does that suggest to you?

That’s what makes this so interesting. I speculate that the signal is coming from a pathway completely separate from visual input coming from the eyes. The signal may be due to neuromodulators from some central brain region, from areas that control dopamine or noradrenalin, because these chemicals are known to signal reward and expectation. This is total speculation but this signal does seem to be an indicator of the internal brain state associated with the task. We could be seeing a reflection of the animal’s brain anticipating things like: How big of a reward am I going to get? When am I going to get it? Am I really engaged or am I going to just take a pass on this trial?

You have studied the visual system in monkeys. How might these findings relate to other sensory processing systems and to other animals?

My gut feeling is that this anticipatory processing system will be appropriately present in every sensory system. We have been setting up to look for the signal in the mouse, and we see a similar signal in the corresponding touch part of their brains. We have a lot more work to confirm that story, to show that it’s the same that we see in the monkey visual system, but at first blush it does look similar. It is there and it is linked to the task timing, independent of whether or not a stimulus is present. I would like to believe that it will turn out to be a similar signal.

My intuition is that this is a sufficiently old system-i.e., biologically and evolutionarily conserved-that it was probably present very early on in evolution. As such, I conjecture that we will find similar signals in species sufficiently related to us and across the sensory modalities: auditory, sensory, visual, etc.

Have you found similar signals in humans?

We have been collaborating with David Heeger, Ph.D., at New York University to address the question in humans, and we do have some very nice preliminary data where the human fMRI shows exactly the same pattern as the monkey data. We’ve done just two sets of experiments so far, so there isn’t a lot we can say about it at this point except to say that the signals look satisfyingly similar.

Looking at the big picture, what is the take-away message as to why this is important research?

There are two aspects. One is simply because fMRI is such a crucial part of neuroscience research now. Yet, despite so many years and so many hundreds of thousands of papers, there is still a fair amount of controversy about the neural basis of the signal that fMRI provides. So anything that allows us to get a clearer understanding of that signal and how to interpret fMRI is very useful, because it allows us to have more confidence in the meaning of the fMRI signal.

The second aspect is the question of what is the function of this task related signal that we’ve identified. It seems as though it is a measure of these internal brain states of reward, anticipation, arousal, and attention. So this is a way of combining studies in humans, where you can ask complex questions and get a better measure of the brain states, with studies in animals where you can conduct electrophysiology recordings and understand the machinery of the signal. The goal is to really understand the brain mechanisms that underlie these brain states that are so prominent in human fMRI signals but have not really been studied in animals.