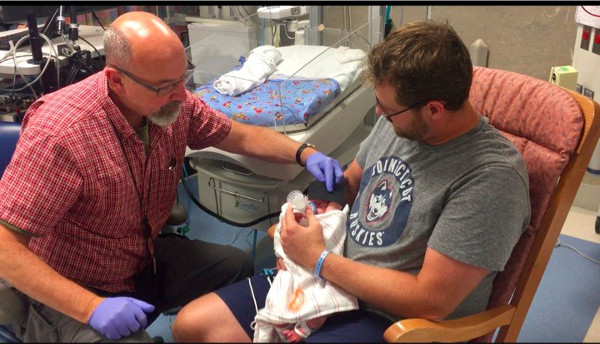 Congenital heart defects are the most common type of birth defect, affecting up to one in 100 babies born in the U.S.–about 40,000 annually. Roughly a quarter of these newborns have defects severe enough to require heart surgery to save their lives, according to the Centers for Disease Control. Approximately one million children and 1.5 million adults are living with a congenital heart defect. As these babies reach school age and adulthood, it has become clear that many experience significant long-lasting cognitive deficits. Increasing evidence points to damage in the brain’s white matter as the likely cause. Daniel Licht and his colleagues have been trying to understand how heart defects in infancy cause brain damage that persists through adulthood, and what can be done to prevent it.

You developed a non-invasive method to measure cerebral blood flow and oxygenation in real time, and have applied it to understand the timing and causes of brain injury in infants with congenital heart defects. What led you to study this particular issue?

We wanted to understand the consequences of how we take care of these kids. What happens when we give a certain medication or do a certain type of surgery? How does it affect brain oxygen metabolism?

I was testing how a new MRI technique designed to measure blood flow would work in pediatric populations. At the time, it had just been discovered that babies with congenital heart defects have a significant white matter injury both before and after they undergo surgery to fix the heart defect. There was something intrinsic about the patients, something we didn’t understand about their anatomy and their blood circulation. Since the MRI sequence measured blood flow, I thought this might be a nice pairing, to see how the sequence performed in pediatric patients, and to see if we could answer the question of how these babies’ anatomy affected their cerebral blood flow.

It was a successful endeavor. We published a nice paper that generated a lot of interest. But then I was sort of stuck. When you measure cerebral blood flow with an MRI, you only get data for the time the image is taken. I needed something that told me a little more about the patient in real time and what was going on during care. So, I reached out to Dr. Arjun Yodh in the physics department at the University of Pennsylvania, who had developed a way of measuring cerebral blood flow with optics. It is the perfect coupling to study this, because the MRI gives you tremendous anatomic resolution but lousy temporal resolution, and optics doesn’t really give you any anatomic resolution but gives you excellent temporal resolution. By combining the two we really had something. We’ve had a partnership ever since.

Why is this particular technique of value to this research question?

This is a population that is notoriously difficult to understand, because a neurologic exam is not very informative. These infants don’t talk or walk or use their hands, so the exam doesn’t really tell you anything about their neurologic state. The only ways they express injury are by having seizures or by not being as awake as we think they should be–two very gross measurements. The only practical way to know what is happening with the brain is to make non-invasive cerebral measurements, and the tools to make those measurements up until this time were lacking.

These babies are born with such extreme heart defects that their systems are unable to circulate blood normally throughout their bodies. How does that lead to brain damage?

To keep these babies alive after they’re born, we first have to get blood flowing into their lungs. This is done artificially with a medication called prostaglandin–it was revolutionary in the late 70’s, because it allowed these children to live long enough to get surgery. But because blood follows the path of least resistance, when the lungs are flooded with blood, the brain and other organs may not get enough. Now we can measure this and demonstrate for the first time that there is this competition between brain blood flow and pulmonary blood flow.

Brain damage usually occurs as a consequence of challenges to how much oxygen gets to the brain. We have shown that the longer these babies wait for surgery, the more likely it is that cerebral blood flow stagnates. As a consequence, oxygen demands in the brain are not being met, and injury begins to accrue.

Why is the brain’s white matter particularly vulnerable to changes in brain oxygenation?

White matter is basically the wiring of the brain, and the wires require insulation. Just like any bare wire, the resistance to current is higher when it’s not insulated than when it is. Babies with congenital heart defects have a delay in the maturation of the cells that make the insulation for the brain’s white matter, which is called myelin. They have this brain-specific developmental delay.

Myelin is deposited beginning at about 35 weeks gestation and continues through childhood. At a certain stage of development when the cells that make myelin are close to maturing, they are particularly prone to hypoxic injury, because they’re using a lot of oxygen to mature. By altering the blood flow and oxygen saturation in the developing fetal brain, congenital heart defects delay the development of the cells that make myelin, keeping the cells in that vulnerable state for longer than normal. When these babies are born at full term, their brains essentially look and respond like the brain of a 34- or 35-week-old fetus.

What would you say is the major finding of this work?

The major finding is that the timing of surgery to fix the heart defect is critical. The key seems to be how long these babies spend with their native, uncorrected anatomy. Based on new data we’ve accrued using longitudinal measurements from birth to surgery, the cutoff seems to be four days. If surgery is performed before four days, you see very little injury; if surgery is five days or later, that’s when injury starts accruing.

This is the first potential modifiable factor that may change the outcomes of these infants. It’s something we can do to improve our therapies for the congenital heart. It’s such a simple explanation that could have profound effects on injury acquisition, and hopefully, to improved cognitive outcomes and academic outcomes later in life.

How will we know that it has made a difference?

It is a good question, because it takes so long for the cognitive effects to be evident. An infant I study today is really not testable in any predictable way until the infant is at least 6 years old. That’s longer than the duration of an NIH grant. That’s two NIH grant cycles before we get to a point of knowing that we’ve made a difference.

My research is focused on the acquisition of the injury. I think people have generally accepted that white matter injury is at least part of the source of the academic difficulty of these children later in life. But it’s very hard to draw a linear relationship between the injury acquired as a newborn and the academic performance that’s measured at six, seven, or ten years of life. There’s a huge challenge there because of the amount of time that passes. We may never know the exact relationship between the white matter injury and long-term outcomes.

That said, there is mounting data to suggest a link. By studying 16-year-olds who survived infant heart surgery, and analyzing what their white matter looks like, we can show that a lot of the deficits they have are related to abnormalities in their white matter.

What is the likelihood that treatment of these infants will change as a result of this work?

Our surgeons here are very interested in this, but they don’t want to make big changes until it is independently verified. A multi-site study is underway with Texas Children’s Hospital and the Children’s Hospital of Philadelphia (CHOP) to prospectively study this using the same outcome measures, the same type of MRI, and the same type of optical measurements. We will harmonize our MRI measurements and compare the effects of our clinical protocols. To remove any bias between the sites, independent sites will do all of the data analyses. As a result, we’ll have two fairly large populations at Texas and at CHOP that we can then bring back and test later on in their lives.

Why are we just beginning to understand the long-term effects of these necessary surgeries in infants?

These surgeries were first developed in the 1970s. Well into the 1990s, there was 50 percent mortality–half of these babies did not survive the surgery. The surgical techniques had to get to the point where kids survived, and that’s really only happened in the last 15 or 20 years. Today, survival for one of the common serious congenital heart defects, transposition of the great arteries, is 98 percent. For another, hypoplastic left heart syndrome, we’ve gotten to about 80 percent survival to school age. So we have reached a level of survival where we can start looking at other things, like cognitive outcomes.

Our longest survivors are now 20 to 25 years old, and we’re seeing that life isn’t that great for them. Some kids do spectacularly well, but the majority of them struggle cognitively. The most tragic part is that they’re cognitively well enough to know that they’re different. For parents, it’s really a struggle as well. They’ve been through a life-or-death situation with their child and thought they were done with it.

You began this particular work under a Dana Foundation grant that started 10 years ago. How important is that kind of pilot grant to looking at questions like this?

In my personal experience, it was crucial. We had just completed a study using MRI to measure cerebral blood flow. We really didn’t have any preliminary data with optics, but we wanted to use optics in the next proposal and needed to collect the amount of data that would be necessary to go to the NIH to propose a bigger study, for which we eventually did receive funding. The 30 or so patients that we recruited with money from the Dana Foundation grant and our publications from that grant allowed us to make that transition and take the next step.