Back to Parent Page
HomeArticlesWorld Science Festival: Exploring the Geography of the Brain 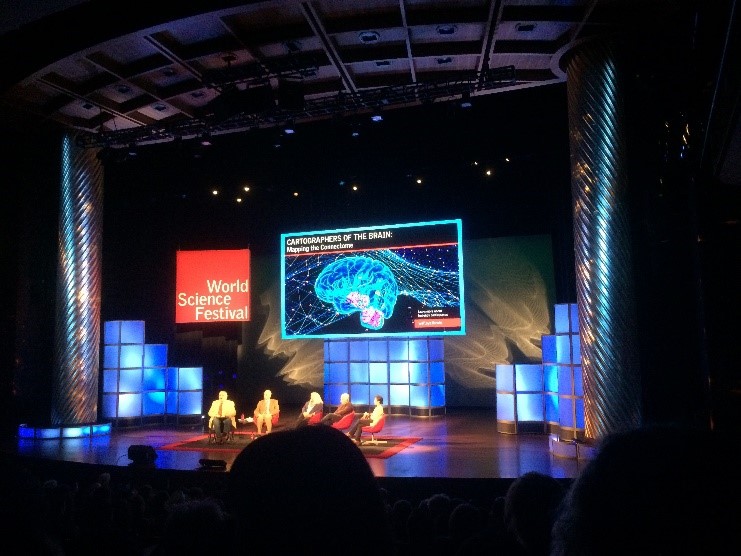 Early world explorers worked with crude maps, painfully charting the geography of new locations for future generations. Today, anyone can log on to the internet for detailed descriptions of the countries, cities, and roads of our world. In comparison, the map of the brain still has a long way to go. In fact, a map of the brain made over 100 years ago is still being used by neuroscientists today.

Since 2010, the Human Connectome Project (HCP) has been one of the major efforts to create a map of the regions of the brain. Lichtman described it as “a project to map the connections between nerve cells and synapses at the level of synapses.” Using diffusion imaging and resting-state functional magnetic resonance imaging, neuroscientists collected data from 1,200 healthy adults. From this data, 180 distinct cortical areas were mapped, 97 of which were new to brain science, said Van Essen, the principal investigator for the program. For an in-depth look at the HCP, see the Dana Foundation Cerebrum article, “The Human Connectome Project: Progress and Prospects,” co-written by Van Essen, and his follow-up podcast interview.

Lichtman’s area of study is about two quadrillion times smaller than Van Essen’s, focusing on individual neurons. If the HCP were a map of the world, his research would be an area the size of Sheboygan, Wisconsin, said Van Essen. The problem with studying in such detail is time and data storage. Lichtman’s lab worked five years to map a cubic millimeter of a rat’s brain, which is three billionths of the entire brain. The tiny piece of brain was filled with Osmium, sliced with a diamond knife into sections 1/1000th of a human hair thick, and photographed. Each picture was 250,000 pixels by 250,000 pixels, taking up an immense amount of digital space, and the lab needed 333,000 pictures to create the rendering. Mapping the human brain in this way would create more digital information than exists in the world.

The HCP provides a detailed, if zoomed out, map of the brain for neuroscientist to navigate their studies. However, the usefulness of spending a large amount of money to continue projects like Lichtman’s is often questioned. Why start a project like this, when we may never finish it? To this Lichtman replied:

I think everyone would probably agree that the Human Genome Project was worthwhile. This was a descriptive attempt to get the nucleotide sequence down to every single nucleotide in the DNA of a human being. When that project was first proposed, there were a lot of people who said: Why should we spend all this money to get all this DNA? We know a lot of it is junk DNA. There’s a lot of things in there we don’t care about. Why do this? This is just going to be impossible to understand. But no one, in the scientific community at least, doubts the extraordinary value of actually having a dataset that describes the entire human genome. And not only that, but now we have the way to do it so we can get your genome and my genome. They’re different. The genome of people who have diseases are a little different. A profound amount of insight has come from generating that dataset. I see connectomics just like I see genomics. It is a way to describe the brain in enough resolution that we can begin to make reasonable hypotheses.