Back to Parent Page
HomeArticles#WSF18: Why Music Makes Us Shiver 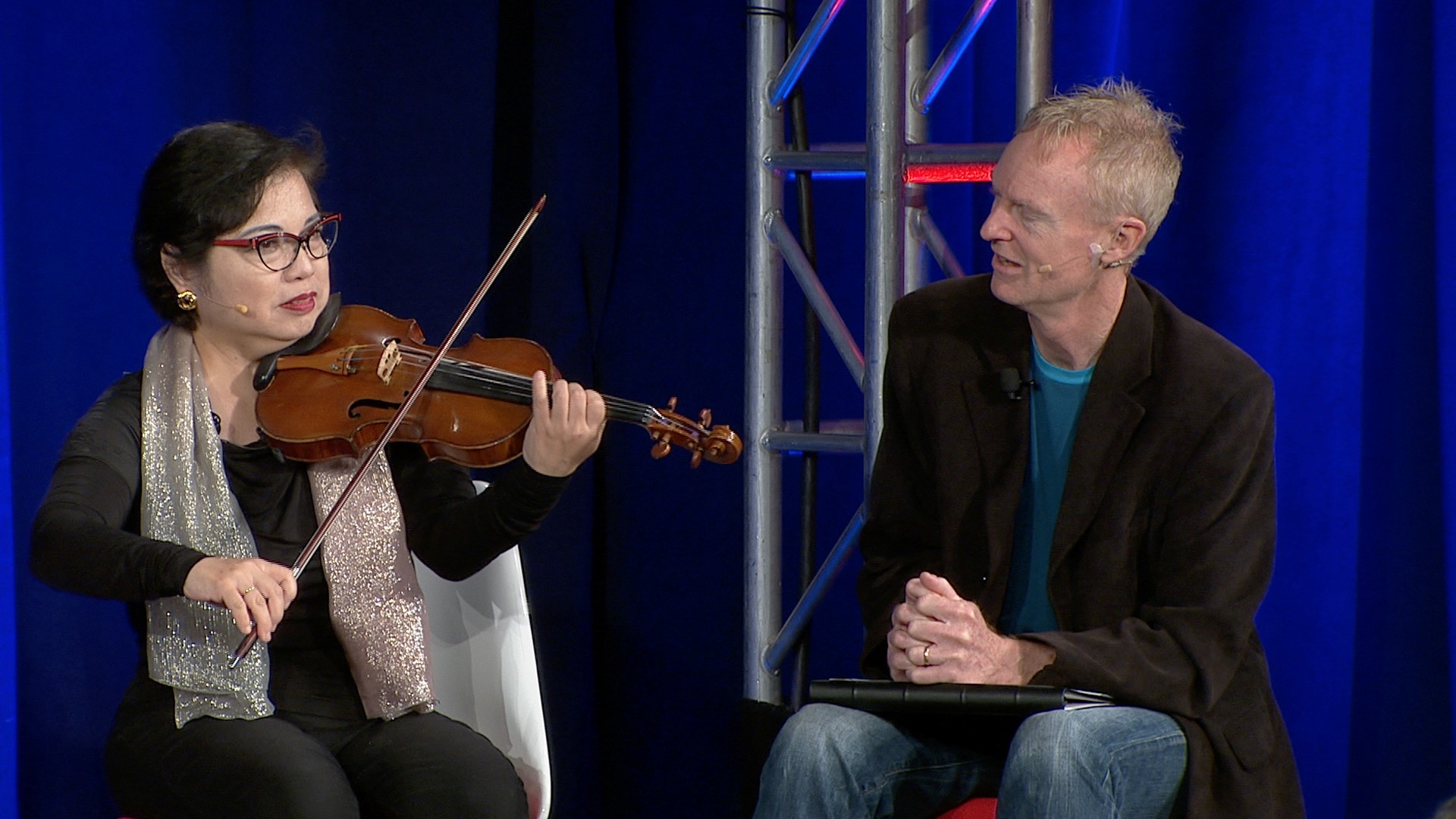 I have some friends who have tried to describe the overwhelming emotion they feel when listening to a certain piece of music, so much so that it sometimes brings them to tears. While I could empathize with the sensation, my reaction to the same piece was often completely different. Personal experience and context for which the piece is playing are just two variables that can affect the way we interpret music and explain why we find some melodies more mesmerizing than others. But what is it exactly that gives a piece its character, and what more is taking place within our brains when we process sounds?

To further explore this phenomenon of music and its ability to dictate our emotions, an expert group of neuroscientists and musicians took the stage for a World Science Festival event, “Notes on the Folds: Why Music Makes Us Shiver.” With John Schaefer, host and producer of a nationally-acclaimed WNYC radio show, as moderator, the conversation began with a solo performance by composer Mari Kimura.

When Kimura walked onto the stage with her violin, it was not only to share the first movement of a recent composition; it was also to demonstrate the power of subharmonics (i.e. undertones) and dissonance used to tie an unsettling, “ghostly” feeling to her piece. Schaefer and most other panelists agreed that this was the overarching emotion conveyed in Kimura’s composition, except for David Poeppel, Ph.D., director of the neuroscience department at the Max-Planck-Institute in Frankfurt, Germany. He said that while she played, Kimura’s violin had him imagining a scene of various animal sounds. To an extent, our brain allows us our own private interpretations of music, he explained, which is not the case when we process other things, such as speech.

Musician and neuroscientist Psyche Loui added that it is the job of the performers to find the common ground between what they are creating and what the audience is hearing. “It’s not so simple that you can just take whatever you want out of music. I think that there are some commonalities.” Different compositional devices and music theory tools are often used to trigger parts of the brain, she said. For example, chord changes are more likely to elicit the feeling of your heart skipping a beat; whereas melodic changes are more likely to make people cry.

Further demonstrating the brain’s tremendous variability that allows us these individual experiences with music, each panelist selected a piece of music that personally gives them the feeling characterized as “chills” when listening (clips at the end of this article).

Theoretical neuroscientist and musician Edward Large, Ph.D., explained that when it comes to musical rhythm, it’s not just the brain stem but the auditory cortex, motor cortex, and basal ganglia that have intrinsic rhythms as well. “There’s a lot we don’t know about the brain, but one of the things we do know is that it communicates within itself through rhythms.” One of the most amazing discoveries in the last 20 years, he said, is the process of brainwave entrainment when we listen to musical rhythms. (This is why we sometimes catch ourselves tapping our feet to a beat unconsciously.) It’s as though the brain is hijacked by rhythmicity, Poeppel added. (Think of brainwaves surfing above parallel sound waves in perfect unison.)

When we consider emotional responses to music, it’s helpful to distinguish between the effective response we have with what is being communicated, said Meagan Curtis, Ph.D., who is also a cognitive scientist and musician. Within each culture and its music, there are “codes” that tell people whether the song is “happy” or “sad” or “scary,” for example. Listeners can identify this after hearing only one quarter of a second of the song, she said, but their emotional response can still vary.

She noted that sad songs are one of the safe ways that we can experience this type of emotion without experiencing any personal consequences. “We don’t seek out bad experiences; we seek positive experiences. But in the arts, one of the fascinating things is that negatively colored things can be experienced as wonderful…and moving,” said Poeppel. “Music, and art in general, gives us the chance to explore these emotions that we tend to avoid because they have no consequences in this context.”  Loui added, “I think it’s really about experiencing a certain beautiful thing together…A lot of the experience of music moves us because it’s kind of a resonant emotional experience across a lot of people.”