Back to Parent Page
HomeArticles#WSF19: Risk-Taking in Extreme Sports 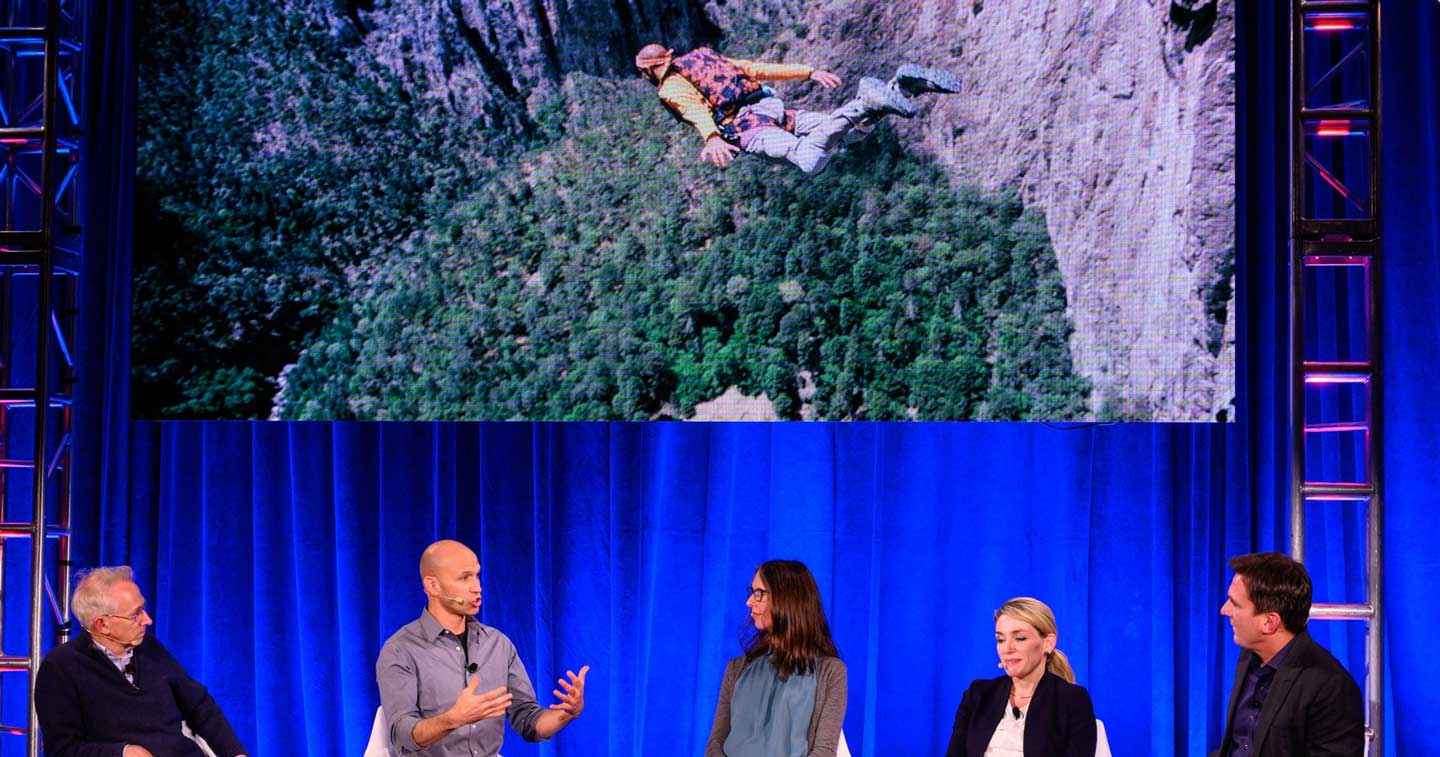 When we mere mortals watch extreme-sports athletes, many of us wonder: Is the risk worth the reward? What drives these risk-takers to put their lives in danger? Are we wired differently, or is it the culture one grows up in, or both? At Friday night’s World Science Festival event, “Risky-Business: the Evolution of Dangerous Behavior,” the panelists set out to answer these and other questions about human risk-taking.

Risk is subjective, agreed the panelists. If an athlete goes through the right training, then the act becomes less risky, said panelist Omer Mei-Dan, an orthopedic surgeon—and BASE jumper (wingsuit flying or parachuting from a fixed structure, often a cliff).

Take Alex Hunnold of the documentary “Free Solo” fame. Hunnold trained for two years before he scaled Yosemite’s 3,000-foot wall of El Capitan without ropes, said Mei-Dan. Now that certainly doesn’t guarantee success, but it did cement a familiarity with the terrain and establish a sense of confidence, he added.

In a CNN article, Hunnold explains,

“For me to look up at the wall and to think I’m just going to climb this like I usually climb this, even though I don’t have a rope on.”

But, to even think of undertaking such a venture–is he crazy? asked panel moderator Bill Weir, a journalist with a penchant for skydiving. “Not crazy,” said Mei-Dan. “If he was crazy, he would die.” As with every extreme-sport athlete, there is a level of risk, or a red line, that Hunnold will not cross, he explained. Hunnold demonstrated his sanity when he aborted his initial attempt at free soloing El Capitan a year before his storied climb.

According to evolutionary biologist and panelist David Sloan Wilson, the ultimate feeling of accomplishment “has to be a euphoria that more than makes up for the fear.” He likened the experience to surviving a hurricane or war–there’s something about the life and death nature of the experience that is euphoric and dysphoric–life seems more precious and becomes more meaningful.

That’s not to say there aren’t biological differences exhibited by those attracted to extreme sports and the general population. Some research suggests a proclivity for sensation-seeking and a higher threshold for fear among extreme-sports athletes, for example.

Panelist Cynthia Thomson, a researcher who studies high-risk sports (and avid skier and climber), spoke about impulsivity (being rash) versus sensation-seeking (thrill-seeking), personality traits that are often thought to be interconnected. Her research suggests that compared to the general population, high- and low-risk athletes exhibit the same low-level of impulsivity because of the planning involved in training. Yet high-risk athletes scored higher in sensation-seeking. To get to the root of these differences, Thomson seeks to determine if there is a genetic component to sensation-seeking personalities, and her initial findings suggest there is.

Circling back to Hunnold, the panelists briefly discussed images of his brain referenced in “Free Solo” that showed no reaction in his amygdala, the region of the brain responsible for processing emotions such as fear, when he was shown 200 gruesome or disgusting images while in a scanner. The control group participants, however, showed strong responses. Whether Hunnold’s brain wiring is due to biology or conditioning remains a question, though it’s likely both, said Wilson.

Based on work by Mei-Dan, there also may be an aspect of resilience playing into extreme athletes’ abilities to accept risk and manage fear. His research suggests BASE jumpers are immune to post traumatic stress disorder (PTSD). In a study, he looked at 10 percent of base jumpers at the time; 75 percent had seen someone die in front of their eyes, 75 percent had themselves experienced a near-miss, and a high percentage had sustained an injury–yet they keep jumping.

In a Daily Camera article he says, “There is almost no BASE jumper on the planet who has not experienced something like that, but even so, they keep jumping. Their brain doesn’t go through the same process that results in PTSD in other populations.”

But besides individual differences, there is a cultural aspect to people’s tolerance for risk, explained Wilson. For example, in traditional cultures, infants are not necessarily supervised to the extent they’re expected to be here in the US, and parents may allow them to get close to fire or handle sharp objects. Through that process, they learn, and some might die, he said.

Like many topics in neuroscience, the answers to the big questions, in this case—what leads people to voluntarily pursue life or death activities for fun—are nuanced and require different disciplines to piece the puzzle together. In the meantime, for those of us who fantasize about being daredevils, but prefer our feet on the ground, you can always push your sensation-seeking boundaries through safer activities such as roller coasters or scary movies. (For more on sensation-seeking as it pertains to the general population, read our briefing paper, “Desperately Seeking Sensation: Fear, Reward, and the Human Need for Novelty.”)

Stay tuned for more coverage from the World Science Festival, including panels “The Promise of Psychedelics” and “Can We ‘Cure’ Deafness and Blindness? Should We?”