Back to Parent Page
HomeReport on Progress in Brain ResearchFood for Thought: What Fuels Brain Cells?

The brain is a thrifty organ. It requires only 20 Watts, much like a basic household light bulb to fuel its amazing information processing power.  This energetic cost is amazingly low when compared to the Megawatts required by today’s most powerful supercomputers, whose performance, particularly in terms of flexibility and learning capacities, pales when compared to the human brain. Yet, as far as the body’s energetic budget goes, the brain is a glutton. While representing only 2 percent of the body mass, 15 percent of the blood pumped by the heart is delivered to the brain. From the blood, the brain extracts 20 percent of the “stuff” that fuels all cells of the body, namely glucose (sugar) and oxygen. This value means that the brain uses per unit mass, ten times more energy than the rest of the organism.

What is it that is so costly in brain function compared to the other organs of the body? It is that energy is used to constantly “recharge the batteries” of neurons, the information processing units of the brain. The signaling mechanisms between neurons necessary for information processing represent approximately 90 percent of the energy used by the brain. In neurons, signaling is based on the rapid flow of charges—carried by ions such as sodium, potassium and calcium across the membranes of the dendrites and the soma. This does  not  cost much per se, as this flow of ions follows favorable gradients; however re-establishing–recharging-these constantly dissipated gradients is the main energy-consuming process of the brain.

In recent years, thanks to the development of new imaging technologies such as positron emission tomography (PET) and functional Magnetic Resonance Imaging (fMRI) and in vivo biochemical approaches such as magnetic resonance spectroscopy (MRS), it became apparent that the brain can use molecules other than glucose to produce energy. And  the use of glucose itself may be more complex than initially thought. With these techniques it is possible to follow the metabolic fate of specifically-labeled molecules and identify energy substrates other than glucose that can provide an alternative fuel to brain cells.

One such  alternative fuel is lactate, a by-product of glucose, which is formed by muscles during sustained physical exercise . Under such conditions, the human brain takes up and uses lactate as a fuel, which can supply up to 20 percent of the total brain energy demands. Lactate infusions have the same effect. In  both conditions  increased plasma lactate results in a decrease in glucose utilization by the brain, raising the possibility that lactate is preferentially used by neurons over glucose as an energy source.  In fact, even under basal conditions the brain extracts 10 percent of its energy demands from plasma lactate.

Another, energy substrate that can be used by the brain is acetate. Acetate can be formed from alcohol in the liver through two enzymatic steps. Alcohol intake decreases glucose utilization and increases acetate uptake by the brain, suggesting, as shown for lactate, the use of acetate as an alternative fuel for the brain. Interestingly, a recent MRS study using labelled acetate has revealed that in heavy alcohol drinkers the brain markedly increases its capacity to take up acetate and to use it as an energy fuel. The reported changes in brain energy metabolism induced by chronic alcohol intake may have important ramifications for the understanding of alcohol dependence and the management of chronic alcohol abuse.

The studies mentioned thus far have addressed the energy metabolism profile of the brain at the whole organ level, as if the brain were a relatively homogeneous organ in terms of its cellular makeup. This of course is not the case.  In addition to neurons, brain cells include non-neuronal cells such as glia, which in fact outnumber neurons. Over the last two decades it has become clear that a particular type of glial cell, the astrocyte, plays a central role in brain energy metabolism. An intense and well regulated dialogue between astrocytes and neurons in energy production and use is an important determinant of brain metabolism and function.

It appears clearly now that the predominant cellular site of glucose  uptake by the brain is the astrocytes. Indeed these cells are ideally positioned for such a function, as they possess specialized processes, called end-feet, which cover brain capillaries. 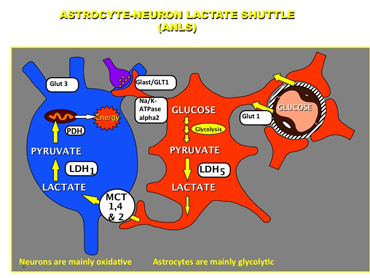 Astrocytes are therefore  sort of gatekeepers for glucose entry into the brain. In addition, through other processes they are in close contact with synapses, the sites at which neurons exchange information. In fact, the vast majority of synapses are ensheathed by astrocytic processes. This arrangement allows astrocytes to sense neuronal activity and to provide signals that will result in increased delivery of glucose where and when neurons are active. In particular, astrocytes can detect when the neurotransmitter glutamate, released at 80 percent of synapses in the brain, is acting at a given synapse and trigger increased glucose uptake.

How does this coupling operate? Glutamate is efficiently removed from the synapse by an uptake mechanism located at the astrocyte processes surrounding the synapse.  This ultimately provides a signal for glucose uptake and for lactate release by astrocytes for the use of neurons in a process known as the Astrocyte-Neuron Lactate Shuttle (ANLS) (Pellerin and Magistretti, 2012). Through other mechanisms, astrocytes sensing neuronal activity   also contribute to local blood flow regulation.

Such mechanisms for coupling neuronal activity to energy supply provide the signals that are detected by functional brain imaging techniques. Indeed these techniques do not detect direct neuronal electrochemical signaling; rather, they sense increases in glucose utilization, blood flow or oxygen consumption for PET or changes in the ratio between oxy- and deoxy-hemoglobin in the case of functional Magnetic Resonance Imaging (fMRI).  Understanding the cellular determinants of brain energy metabolism has provided a key to better understand the signals detected by functional brain imaging techniques.

Further analyses of the cell-specific metabolic fluxes in the brain have shown the existence of an “à la carte” delivery of energy substrates. Thus, neurons predominantly use lactate as a fuel, and restrict the use of glucose to predominantly produce a form of energy called reducing power.  This allows them to buffer the free radicals they produce because of their high oxidative metabolism. Astrocytes in turn, process glucose mostly glycolytically in an unselfish manner aimed at producing lactate to be used by neurons and other cells such as the myelin-forming oligidendrocytes. Astrocytes have a preference for acetate, which they can use as an energy source. Finally, astrocytes are the energetic warehouse of the brain: they are the only cells to contain glycogen, the storage form of glucose and the main energy reserve of the brain. This reserve can be mobilized by neuromodulatory circuits, such as those containing the monoamines noradrenaline and serotonin. The energy substrate made available through such a mechanism is lactate, which when specifically mobilized from glycogen provides the extra energy boost necessary to match the increased demands associated with neuronal plasticity underlying long-term memory

Energy production and use is a highly regulated process in the brain, resulting from a subtle exchange of signals between neurons and non-neuronal cells. In analogy with the rest of the body in which endocrine systems orchestrate metabolic homeostasis, neurotransmitter systems with specific cellular targets operate to ensure a matching between energy demands and substrate delivery with a high spatial and temporal precision. Disruption of such homeostatic mechanisms is likely to  contribute to neuropathological processes, in particular those that affect cell integrity such as those observed in neurodegenerative diseases.

Challenges ahead will be to improve the spatial resolution and the molecular specificity of imaging techniques to allow monitoring the fluxes of energy substrates with a cellular resolution. Such a progress will most likely be possible only in laboratory animals. However the knowledge acquired will provide very precious information to develop appropriate pharmacological interventions in humans for neuroprotective strategies and for the improvement of cognitive performance.