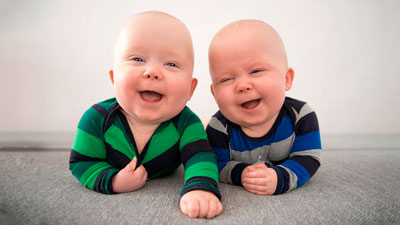 The brain is largely made of proteins. They provide the scaffolding on which its cells ore built, and the neurotransmitters, hormones, enzymes, and other chemicals that bring it to life.

Behind each protein is a gene: a spiral of DNA superintends its construction out of amino acids. In recent decades, genetic research has become a mainstay of neuroscience, illuminating how the brain is put together, the molecular pathways of its operations, and the myriad things that can go wrong.

Deoxyribonucleic acid, or DNA, is the basic material of genetics. A DNA molecule consists of two strands twisted together, each mode up of chemical units, bases-guanine, adenine, cytosine, and thymine-linked or in a long sequence.

Genes are sections of DNA whose base pairs provide information for one or more protein. Human beings have an estimated 20,000 to 25,000 genes.

Almost all our DNA is packed into the nuclei of our cells, tightly coiled in 46 structures called chromosomes, which are arrayed in pairs, one chromosome inherited from each parent. Women have 23 matched pairs, while men have a smaller “Y” chromosome as part of one pair.

Several dozen additional genes ore lodged in the mitochondria, cell structures outside the nucleus that produce energy. All mitochondrial genes are inherited from the mother.

Over the last several decades, on enormous research effort mapped the sequence of genes that comprise a full set of instructions for constructing a human being—the human genome. Ninety-nine percent of the three billion base pairs that make up the genome are identical in everyone. Variations in the remaining one percent­—polymorphisms, or gene alleles—make some eyes blue and some brown, and can mean the difference blue between health and disease.

From Gene to Protein

To make a protein, a gene’s DNA becomes template for a molecule of messenger ribonucleic the (mRNA), a process called transcription. mRNA acid resembles DNA in structure, but can move out of the nucleus into the cell body to regulate protein assembly.

This process, translation, takes place in structures called ribosomes, which “read” mRNA and translate three-base sequences on the molecule as one of the 20 amino acids from which proteins ore mode. A different kind of RNA, transfer RNA (tRNA), then assembles the amino acids needed to form the protein called for by the gene. A protein typically contains hundreds or thousands of amino acids. 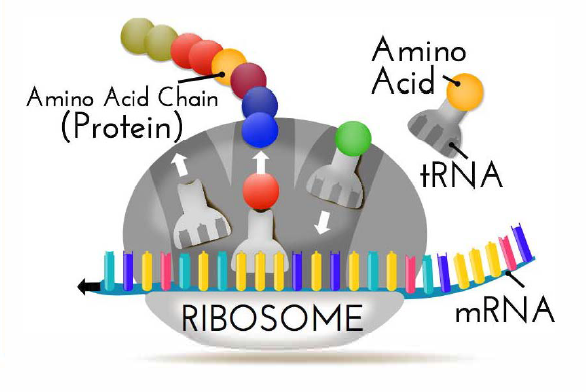 While most cells contain the same DNA, they don’t produce or express all the same proteins: a bone cell cannot release neurotransmitters like a brain cell. The reason: only some genes are active at a given time in a given type of tissue. Whether a gene is switched off or on depends on the state of its DNA–if it is tightly coiled, for example, it cannot provide the template for its protein.

A gene may also be switched on or off temporarily or permanently by drugs, lifestyle, environmental forces, or stress. Changes in gene expression are central to such basic mental processes as memory formation, and may play a key role in brain disorders, including Alzheimer’s disease.

In studying epigenetics—”the factors that regulate how genes are expressed”—researchers have focused on two chemical processes.

Methylation attaches a small chemical tag, or group of atoms, to the DNA of a gene, which blocks the transcription process.

The other process involves histones, proteins that provide a core for DNA to wrap around. Modification of histones (e.g. removal or addition of an acetyl group) can make it more or less difficult for DNA to unwind, interfering with or promoting transcription of information to mRNA.

After transcription, molecules of microRNA (miRNA) in the cell body may keep mRNA from reaching the ribosome, inhibiting translation into protein.

Genes don’t operate in isolation, but in the context of upbringing, experience, lifestyle, and environmental exposure. One goal of brain research is unraveling this complex interaction.

For example, researchers have mapped how genes regulating neurotransmitters and receptors in the brain might influence whether an individual can cope well with stressful events, or will develop problems like post-traumatic stress disorder.

Conversely, it is known that negative experiences early in life make individuals vulnerable to stress-related problems while positive experiences produce healthy outcomes, and animal studies have identified epigenetic effects that may be responsible. Transgenerational behavioral transmission by the mother is one mechanism, and methylation of the germ cell DNA may be another

How Much Is Genetic?

A basic question in genetic research is thus the extent to which a trait (like intelligence) or susceptibility to a disease is inherited or influenced by the environment (including epigenetic effects)—how much is due to nature, how much to nurture.

Answers to such questions often come from twin studies. Researchers compare how frequently the same trait or illness appears in identical, or monozygotic, twins, who develop from a single fertilized egg and have all the same genes, and in fraternal, or dizygotic, twins, who develop from two separate fertilized eggs and have half the same genes. The difference can be used to estimate the heritability of the trait under study.

Studies of similarities among twins reared apart can spotlight traits in which the influence of genetics is strong. But equally important are the differences that develop from twins growing up in contrasting social and physical environments, since they reflect the considerable role of epigenetic factors.

Twin studies have helped illuminate such basic facts of mental life and development as how heredity affects early learning, reading skills, and other aspects of cognitive development.

This kind of research has also advanced our understanding of brain disease. For example, repeated studies show that the identical twin of a person with schizophrenia is at far greater risk of developing the disease than a fraternal twin, suggesting that genes play a substantial role in this mental illness. Through twin studies, we know that the tendency to abuse or become addicted to a cocaine, marijuana, and nicotine is to a substantial extent inherited.

What Genes Are Involved?

Because researchers know the chromosomes on which certain genes are located, they can deduce that other genes are nearby if they tend to be inherited together. Linkage analysis of DNA samples from families with a high rate of Alzheimer’s disease led to the discovery that certain variants, or alleles, of the gene for apolipoprotein E (ApoE) on chromosome 19 increased risk of the disease.

Now that researchers have mapped the whole genome, they can rapidly analyze DNA samples to pick out genes that occur more frequently in people with a brain disorder or psychological or behavioral trait of interest.

Researchers have used such genome-wide association studies to identify genes that may play a role in Parkinson’s disease, depression, ADHD, and schizophrenia, as well as genes besides ApoE in Alzheimer’s disease.

Because brain diseases are complex, most cannot be traced back to a single gene: a number of genes may each contribute a small amount to increased risk. Investigating these “candidate genes” and the proteins they express may provide insights into the disease process and suggest new targets for treatment and biomarkers to help identify people at risk.

What Do Genes Do?

One way researchers probe a gene’s operations is by altering it in lab animals. They substitute DNA segments in mouse embryos to create knock-out mice where the gene no longer functions, then observe differences from normal mice. They can also enhance the activity of a gene to create knock-in mice.

Researchers use genetically engineered animals and cells as tools to investigate normal brain functions and disease processes at the molecular level. For example, to explore the role of a cytokine (a chemical linked to the inflammatory response) in memory, investigators measured memory in mice bred to lack a receptor for the cytokine, or to produce a chemical that blocked it.

Drug researchers similarly used knock-out and knock-in mice to identify a brain receptor that is crucial to the response to nicotine, and to show how genetic variations might explain in part why some people become addicted to cigarettes and others don’t.

Genetics researchers probe interactions between genes and drugs to work toward the goal of personalized medicine—tailoring treatment to the individual—and insights that could lead to new drug development.

In this effort, researchers have analyzed whole genome-association studies in search of markers to identify people with major depression who are likely to get better with fewer side effects when given specific antidepressants. In addition, researchers enlist studies using genetically engineered animals to map the molecular pathways that determine response to these medications and advance research into more effective ones.