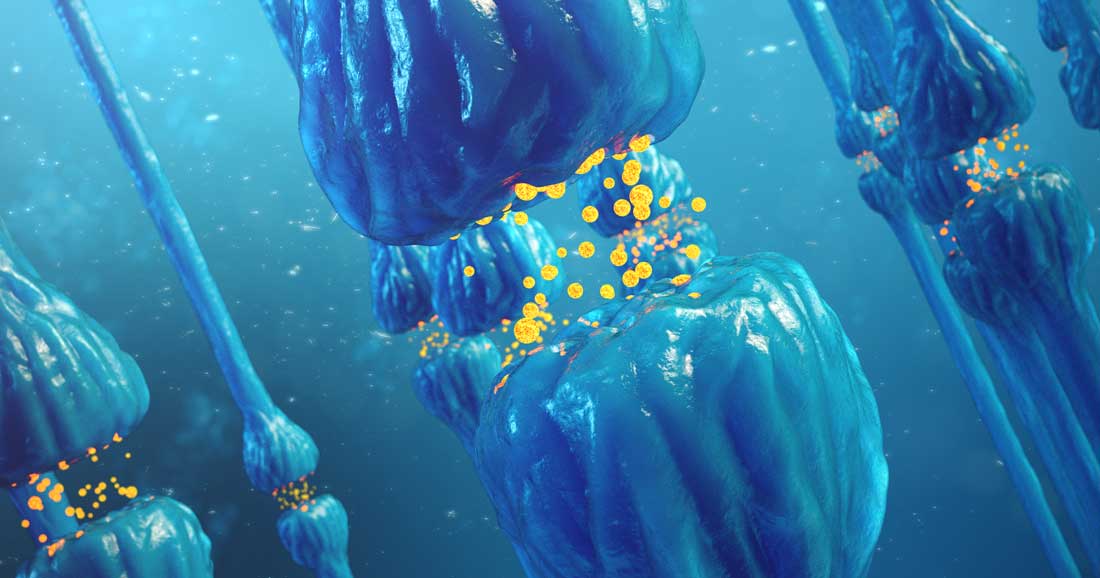 There are many types of neurotransmitters in the brain, but they do have a few things in common. Neurotransmitters are endogenous—produced inside the neuron itself. When a cell is activated, these neurochemicals are released into the synapse from specialized pouches clustered near the cell membrane called synaptic vesicles. Specific receptors on neighboring cells can then take up the neurotransmitters, which can increase or decrease the signal being passed along a particular circuit.

When scientists first studied these powerful little neurochemicals, they believed each type of neuron released a single, unique neurotransmitter over its lifetime. This theory, called Dale’s Law, was suggested by Australian neurophysiologist and Nobel Laureate John Eccles based on the previous work of neuroscientist Henry Hallett Dale. But as technologies and techniques in the field advanced, scientists saw that neurons can synthesize and release more than one type of neurotransmitter. Eccles later revised Dale’s Law to say that specific neurons release a similar set of neurotransmitter types at their synapses, if not a single neurotransmitter.

Today, the majority of neuroscientists will tell you that most neurons release the same neurotransmitter from their axons—which is why you may see some neurons referred to as “dopaminergic” or “serotonergic,” releasing dopamine or serotonin, respectively. But new work in the field has uncovered that neurons are not fixed when it comes to the chemicals they release.

Some cells change the type of neurotransmitters they release depending on the circumstances, sometimes releasing up to five different kinds. Scientists call this phenomenon “neurotransmitter switching.”

Neurotransmitters, at the highest level, can be sorted into two types: small-molecule transmitters and neuropeptides. Small-molecule transmitters, like dopamine and glutamate, typically act directly on neighboring cells. The neuropeptides, small molecules like insulin and oxytocin, work more subtly, modulating, or adjusting, how cells communicate at the synapse. To date, scientists have identified more than 60 distinct types of neurotransmitters in the human brain, and most experts say there are more left to discover. These powerful neurochemicals are at the center of neurotransmission, and, as such, are critical to human cognition and behavior.

Often, neurotransmitters are talked about as if they have a single role or function. Dopamine is a “pleasure chemical” and GABA is a “learning” neurotransmitter. But neuroscientists are discovering they are multi-faceted and complex, working with and against each other to facilitate neural signaling across the cortex. Here is a list of some of the most common neurotransmitters discussed in neuroscience.

Acetylcholine (Ach) was the first neurotransmitter discovered. It is a direct action small-molecule that works primarily in muscles, helping to translate our intentions to move into actual actions as signals are passed from the neurons into the muscle fiber. But it also has other roles in the brain, including helping direct attention and playing a key role in facilitating neuroplasticity across the cortex.

Dopamine (DA) is often referred to as the “pleasure chemical” because it is released when mammals receive a reward in response to their behavior; that reward could be food, drugs, or sex. It is one of the most extensively studied neurochemicals, mainly because it plays such diverse roles in human behavior and cognition.

Glutamate (GLU) is the most excitatory neurotransmitter in the cortex. Too much glutamate results in excitotoxicity, or the death of neurons due to stroke, traumatic brain injury, or amyotrophic lateral sclerosis, the debilitating neurodegenerative disorder better known Lou Gehrig’s disease. Yet, it’s not all bad news. The excitement GLU brings is important to learning and memory: long term potentiation (LTP), the molecular process believed to help form memories, occurs in glutamatergic neurons in the hippocampus and cortex.

Serotonin (5HT), sometimes called the “calming chemical,” is best known for its mood modulating effects. A lack of 5HT has been linked to depression and related neuropsychiatric disorders. But 5HT is farther reaching, and has also been implicated in helping to manage appetite, sleep, memory, and, most recently, decision-making behaviors.

Norepinephrine (NE) is both a hormone and a neurotransmitter. Some refer to it as noradrenalin. It has been linked to mood, arousal, vigilance, memory, and stress. Newer research has focused on its role in both post-traumatic stress disorder (PTSD) and Parkinson’s disease.

If GLU is the most excitatory neurotransmitter, then its inhibitory correlate is GABA. GABA works to inhibit neural signaling. If it inhibits cells too much, it can lead to seizures and other problems. But this neurotransmitter also plays an important role in brain development. New research suggests that GABA helps lay down important brain circuits in early development. Like DA, GABA also has a nickname: the “learning chemical.” Studies have found a link between the levels of GABA in the brain and whether or not learning is successful.

Neurochemicals like oxytocin and vasopressin are also classified as neurotransmitters. Made and released from the hypothalamus, they act directly on neurons and have been linked to pair-bond formation, monogamous behaviors, and drug addiction. Hormones like estrogen and testosterone can also work as neurotransmitters and influence synaptic activity.

As neuroscientists are learning more about the complexity of neurotransmission, it’s clear that the brain needs these different molecules so it can have a greater range of flexibility and function. 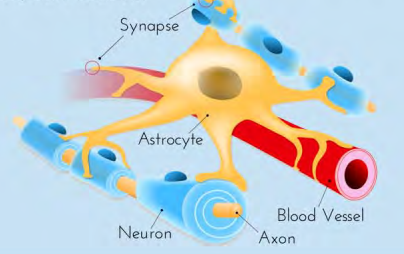 It was once believed that only neurons released neurotransmitters. New research, however, has demonstrated glia, the cells that make up the “glue” that fills the space between neurons to help support and maintain those cells, also have the power to release neurotransmitters into synapses. In 2004, researchers found that glial cells release glutamate into synapses in the hippocampus, helping synchronize signaling activity.

Astrocytes, a star-shaped glial cell, are known to release a variety of different neurotransmitters into the synapse to help foster synaptic plasticity, when required. Researchers are working diligently to understand the contributions of these different cell types–and the neurotransmitter molecules they release—on how humans think, feel, and behave.